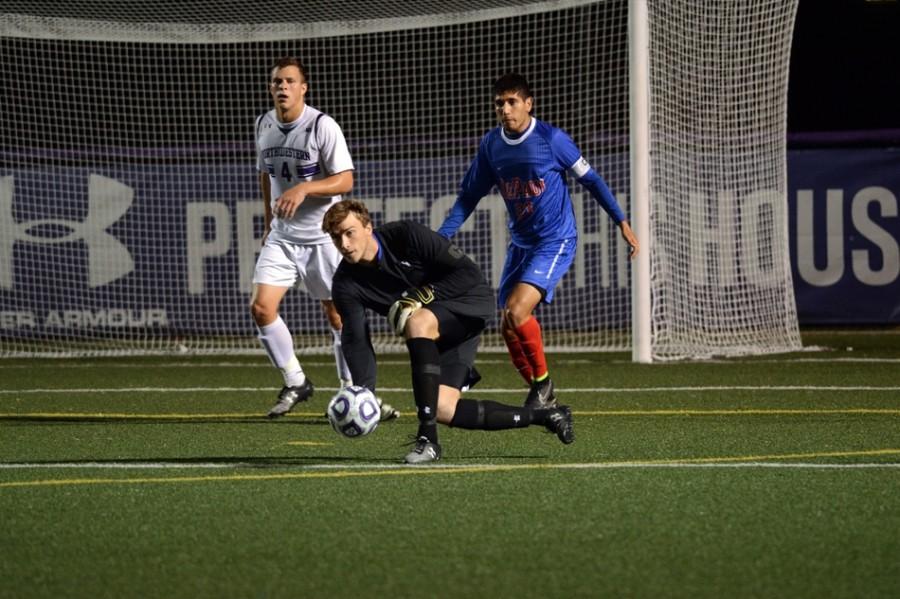 Despite three impressive saves from Northwestern senior goalkeeper Tyler Miller, the Wildcats lost 1-0 to No. 9 Notre Dame on Tuesday.

Notre Dame midfielder Patrick Hodan converted from 12 yards out in the 66th minute for his fourth goal of the season to give the Fighting Irish the victory.

“We were a little bit slow and sluggish on the field,” NU coach Tim Lenahan said. “Notre Dame was clearly the better team.”

There weren’t many opportunities for the Cats throughout the match. Despite that, it was junior forward Joey Calistri who forced the first save of the game with a shot in the 12th minute.

The Fighting Irish dominated possession in the first half but weren’t able to make the most of their time on the ball, recording eight shots but no goals.

In the 24th minute, NU senior goalkeeper Tyler Miller was beat by a thunderous shot from midfielder Connor Klekota, but fortunately for the Cats, the shot cannoned off of the crossbar.

The same two men were forced into action again less than a minute later when Cicciarelli found himself on a breakaway, but Miller made a great save to put it out for a corner.

After the period of Notre Dame danger, NU produced a couple of opportunities toward the end of the half. The Cats hit the post themselves in the 38th minute when senior midfielder Eric Weberman, who came off of the bench, rattled the post of the Fighting Irish goal with a dangerous free kick just outside of the 18-yard box.

Then, three minutes later, freshman forward Elo Ozumba found his way into the box, cut right and shot high of the goal.

The Fighting Irish kicked off the second half on the front foot, while NU sat behind hoping to catch their opponents on the counterattack. The Cats weren’t able to take advantage of any of these chances.

But in the 66th minute, the referee pointed to the spot after a breakaway by Notre Dame. Sophomore defender Nathan Dearth fouled Fighting Irish forward Jon Gallagher in the box and received a yellow card for the foul. Hodan made no mistake from 12 yards out, even though Miller dove the right way, to give the Fighting Irish the lead.

“It was a pretty good PK,” Miller said. “I thought I might have had it, but he beat me at full stretch.”

After the goal there were just a couple more opportunities for either team and two more yellow cards for NU’s Weberman and Miller.

“We have to find a way to eliminate giving up (penalties) even if they are controversial,” Lenahan said. “Four out of the seven goals we’ve given up have been penalty kicks, and that’s got to stop.”

The Cats will try and get back to their winning ways as they travel to Rutgers on Saturday for a Big Ten matchup.