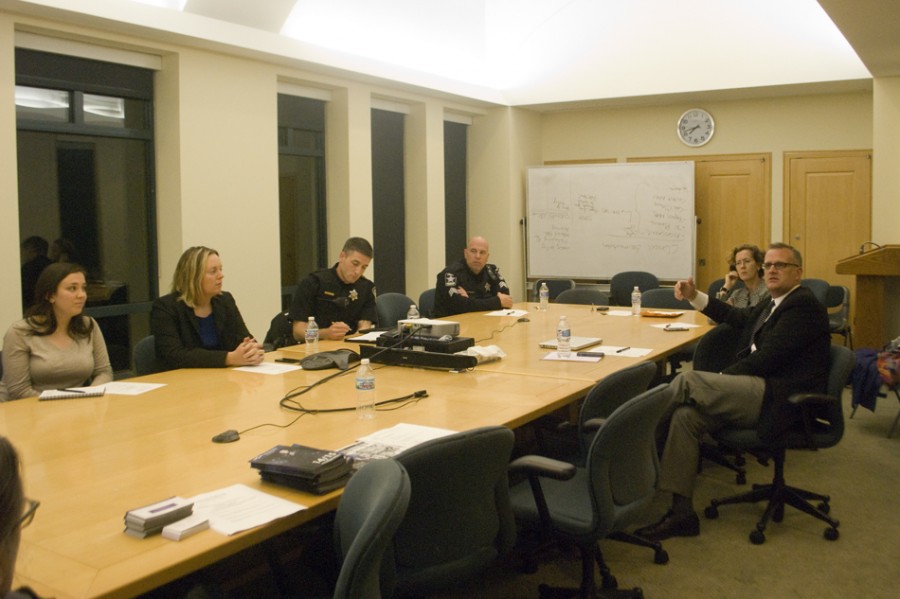 Dean of Students Todd Adams talks to Northwestern and Evanston officials at a Community Conversations meeting Tuesday. Evanston residents brought up concerns about off-campus parties and students making disruptive noises in the community late at night.

Members of the Evanston and Northwestern communities discussed issues with off-campus student parties at a forum on Tuesday night.

The Fall Community Conversations forum, held at The Family Institute at NU, 618 Library Place, brought together those who had questions about off-campus housing and wanted to voice concerns or complaints. Attendees included Evanston residents, NU and city officials, NU police officers and a member of Associated Student Government.

The eight Evanston residents who attended focused on concerns about the noise from off-campus parties and the students attending them.

Anthony Kirchmeier, NU’s director of off-campus life, gave an update on the activities for Homecoming week and the Homecoming football game Saturday. He said Fitzerland is being used as a way to get students away from off-campus areas and toward the football stadium, adding that there is also food and water available.

“I know you try every year to get kids and students in other areas, but it doesn’t matter because they always start out very early with very loud music,” Evanston resident Barbara Blades said. “It’s pretty hard to take when there’s a night game and loud partying that goes on for hours starting pretty early in the day.”

Resident Kevin McKenna said too many people are given warnings as opposed to tickets for noise. He said people would likely quiet down faster if tickets were given more liberally.

Another Evanston resident said she has asked police officers to write tickets before, but they don’t do it.

“When we ask you to write the tickets, we’re not just being pains in the ass,” the resident said. “We’re asking you because the landlord potentially wants to kick the students out of the house too. We’re hopeless and helpless without cooperation of the police department.”

Evanston police officer Scott Sengenberger, a member of the problem solving team for the 1st and 7th wards, said students are given tickets and not warnings.

Stoeckl said there will be additional police cars in the neighborhood after the Homecoming game. Police officers will also be deployed from the stadium through the neighborhoods on motorized scooters, he said. During the last home football game, police spent two hours going down city streets following the game, including Maple Avenue, Hamlin Street and Simpson Street.

Dean of Students Todd Adams said there is a lot of time and energy his office spends dealing with off-campus incidents. Students who are issued tickets usually have to go through Adams’ office in student conduct, as well as the police and potentially the court systems.

Many of the residents had identified what they called “problem houses” near their residences and asked how to best deal with those houses.

Evanston resident Emily Ekstrand Nieves said it has been helpful when student residents have come to her first, as it established a good tone for the year. This year, she said, she hasn’t gotten that same sense from the new student residents.

The problem is that students don’t have a chance to really live within the community, resident Alfonso Nieves Ruiz said.

“What we have here is the lack of the sense of community because the students are only here for four years or two years or six years, and then they just leave,” he said.

However, Bella Sandoval, a member of ASG, said there are events, such as Cats Come to Dinner, that allow students to interact with the community.

Kirchmeier said there are also service projects in the area for NU students and meetings for off-campus relations.

“We do try to do a certain amount of outreach, but we could always do more,” he said.

Correction: An earlier version of this article misstated which police department officer Scott Sengenberger is affiliated with. He is an Evanston Police Department officer. The Daily regrets the error.