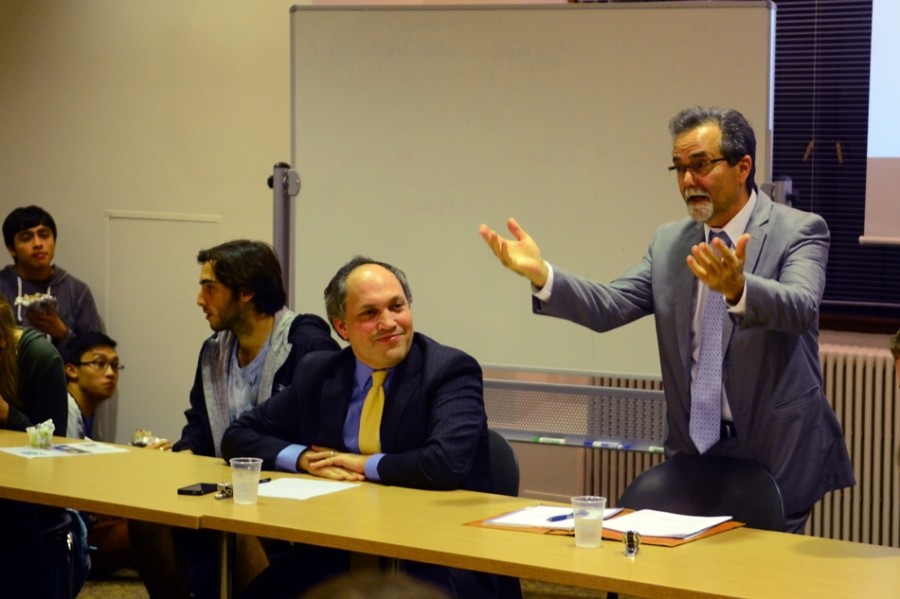 A former Pentagon official and a visiting scholar debated on Tuesday the successes and failures of U.S. foreign policy in the Middle East as part of an event hosted by different campus groups.

Michael Rubin, a resident scholar of the American Enterprise Institute, and Nabeel Khoury, a senior fellow for Middle East and National Security at the Chicago Council on Global Affairs, discussed national security, addressing issues in the Obama administration’s strategy and overall goals.

The event, held in Scott Hall, was organized by Northwestern’s chapter of The Alexander Hamilton Society, a nonpartisan group that encourages debate on foreign policy, and AEI on Campus, the student branch of a conservative think tank. About 50 people attended the talk.

“The Obama administration and the president himself have a very good understanding of what’s happening in the Middle East,” Khoury said. “The problem is how you go from an overall goal to a strategy to implement to get from point A to point B.”

Khoury then discussed the role that promoting democracy has played in American policy-making in recent years. Khoury pointed to the Bush administration’s strategy of promoting democracy in one nation with the hope that it would spread throughout a region. However, he said this idea is flawed because it has the potential to advance religious extremism.

“It’s an interesting concept: If a dictator controls the political environment in the region, they can squeeze out civil society and secular political parties because they are easy to identify and ban,” Khoury said. “But they can’t ban religious practice and gatherings, and therefore religious extremism is the only thing that survives.”

Rubin was more critical of U.S. foreign policy and its strategies, saying they tend to focus on grievances rather than ideology. He gave the example of former Iraqi Prime Minister Nouri al-Maliki and said simply addressing the complaints of terrorist organization ISIS would have been futile for achieving peace.

“We have a separation of church and state, but that doesn’t mean we can rule religion out of every policy,” Rubin said.

In response to Rubin’s comments on grievances versus ideology, Khoury said the view of Middle Eastern ideology popularized by pundits and politicians is inaccurate.

“Pundits say (people in Middle Eastern countries) hate Western values and Western cultures and therefore want to push it back,” he said. “This is true as far as extremists are concerned, but these are a small minority in the region.”

Rubin also argued the biggest difference between the political left and right is on the topic of national security. He said while the left tends to “demonize” power, the right recognizes that the use of military force is sometimes necessary.

Khoury criticized the Obama administration’s foreign policy as well, saying as a superpower, it is the U.S.’s responsibility to “maintain power and use it effectively.”

Rubin ended his remarks with suggestions for U.S. policy in the future. The U.S. should envision what they want policy to look like in a decade and move backward, he said. He added the U.S. needs to understand history in order to better grasp foreign issues.

Weinberg senior Wilson Shirley, who helped organized the event, said he first met Rubin in Washington, D.C. and became interested in bringing him to campus.

“With this event, you get two speakers with differing viewpoints on an issue,” said Shirley, a member of both AHS and AEI on Campus. “You often don’t get to critically engage in these issues in the classroom.”