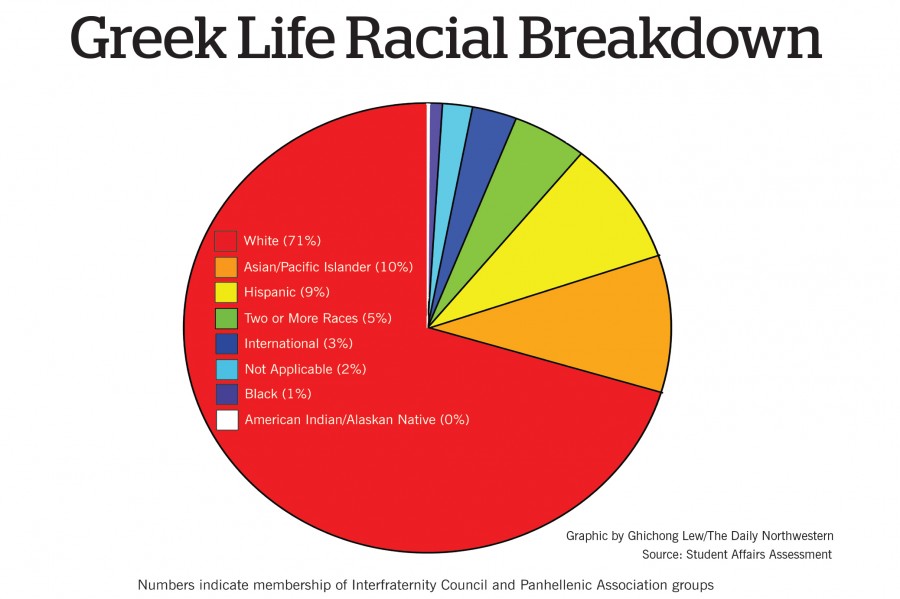 About 70 percent of people involved in Greek life at Northwestern are white, according to an assessment gathered by the Division of Student Affairs.

The assessment, which details the racial, class and school breakdowns of NU’s fraternities and sororities as of Winter Quarter 2014, shows white students made up 71 percent of Interfraternity Council and Panhellenic Association groups and 68 percent of Greek life overall. This data applies to all groups overseen by the Office of Fraternity and Sorority Life which includes IFC, PHA, Multicultural Greek Council and National Panhellenic Council.

Student Affairs Assessment passed the numbers to the OFSL in the winter. In an email to The Daily last week, OFSL Assistant Director Ben Wiebers said administrators have not yet discussed “the information or any trends within it” due to transitions in the office.

The membership of MGC groups were 47 percent Asian and Pacific Islander and 32 percent Hispanic. Black students made up the majority of NPHC groups.

PHA president Frances Fu said the demographics did not surprise her. The SESP senior said she thinks the demographics mirror “the progress of universities” in slowly having more diverse students.

Fu said PHA has focused more on socioeconomic diversity within the Greek community, including starting “conversations around micro-aggressions around financial privilege and socioeconomic status.”

Representatives of IFC were unable to comment as of Tuesday evening.