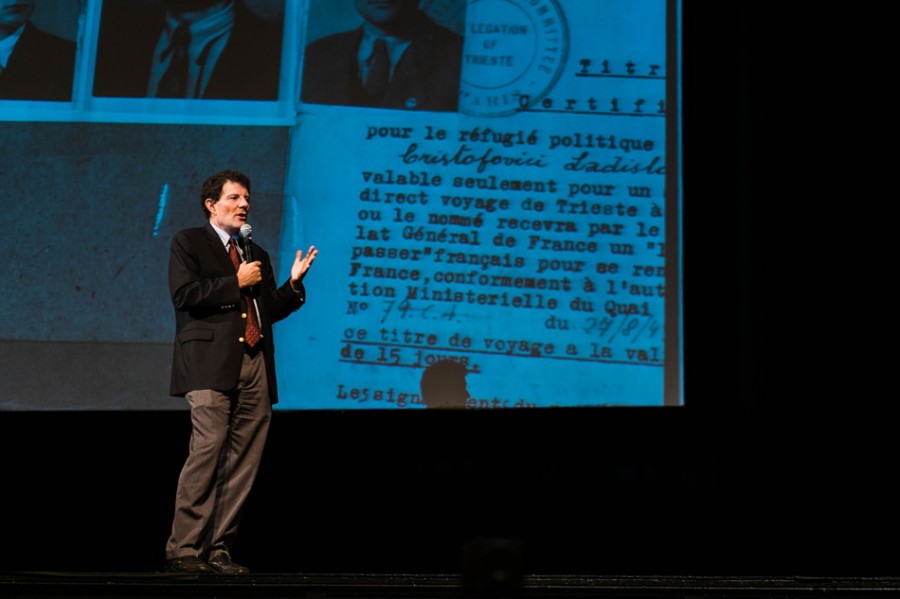 New York Times columnist Nicholas Kristof shares advice on how college students can impact global issues. Kristof spoke to an audience of about 500 in Cahn Auditorium on Monday night.

Nicholas Kristof is often asked why many of his columns in The New York Times focus on issues of global engagement.

For him, the answer is the story of his father.

Kristof’s father, who was a refugee after World War II, found himself working in a hotel in France. There he met an American woman who was working for the U.S. government. She took a liking to Kristof’s father and convinced her parents in Portland, Oregon, to sponsor his travel to the United States.

Kristof, a Pulitzer Prize-winning columnist at The New York Times, spoke Monday night to about 500 people in Cahn Auditorium, using his father’s story as an example of the impact individual efforts can have.

“I sometimes hear the objection that our efforts really can’t solve problems,” he said. “These are problems that are too vast to address. Anything we do is going to be a drop in the bucket, and in a sense, that’s true.”

For Kristof’s father, however, these efforts changed his life.

Kristof and his wife, Sheryl WuDunn, recently published “A Path Appears: Transforming Lives, Creating Opportunity,” a book in which they share their experiences with giving back to communities around the world in order to help others become more effective global citizens. The event, which was co-sponsored by six Northwestern organizations, included a Q&A session and a book signing.

Janka Pieper, manager of marketing and communications for International Program Development and one of the sponsors of the event, said the turnout was remarkable.

“I’m just blown away, but that shows how much of an impact he has on us, on our students, on everyone in the community,” she said.

Kristof, who has traveled to all 50 states and more than 150 countries, shared stories of ways people across the country have been successful in helping others, mixing in his own perspectives about effective ways to make change.

He strongly encouraged NU students to take advantage of study abroad opportunities, citing his own experience studying in Arabic in Egypt.

“I really think just a crucial part of an education is to get out of the classroom in a very different environment in ways that really contest yourself,” he said.

Weinberg sophomore Alex Kaldjian said he attended the event because he has grown up reading Kristof’s columns. He said Kristof’s message about how to establish connections with others resonated with him.

“The way to reach out to people, the way to inspire people is through personal stories and seeing these human connections,” Kaldjian said. “He does an incredible job at putting that together in the way he writes and in the way he speaks.”

Kristof concluded the Q&A session by encouraging college students not to limit their efforts to help others.

“I don’t think our empathy or compassion should depend upon the color of someone’s skin or the color of their passport,” he said. “Often our efforts can actually have more impact abroad.”