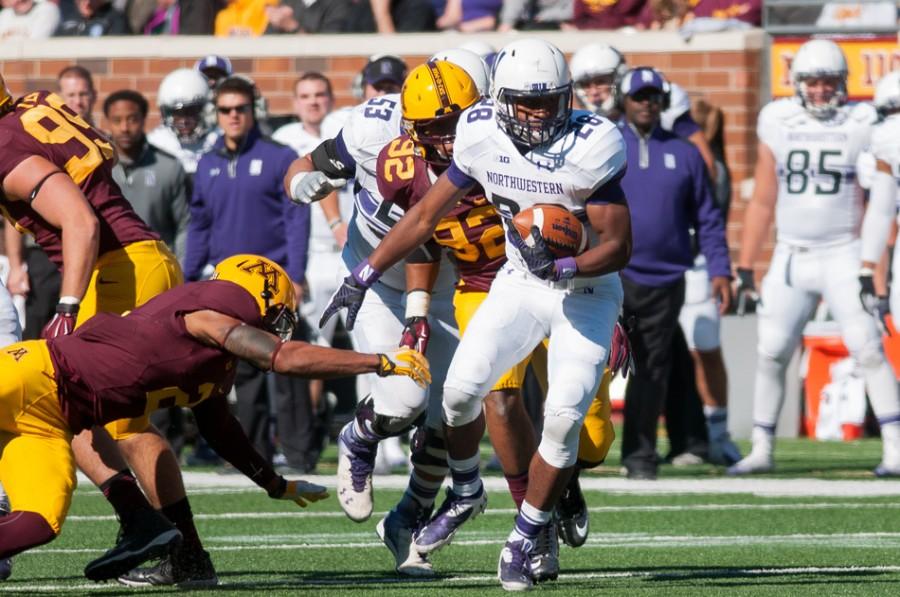 Freshman running back Justin Jackson eludes Minnesota defenders on one of his 23 carries Saturday. Despite Northwestern’s loss, Jackson was named Big Ten Freshman of the Week, becoming the third straight Wildcats player to win the award.

For the third consecutive week, a Northwestern player was named the Big Ten Freshman of the Week.

This time it was running back Justin Jackson, who impressed last week against Minnesota by rushing 23 times for 106 yards and also catching four passes for 50 yards. The contest was the second in which Jackson surpassed 100 yards on the ground.

“It’s pretty special to have him in the backfield,” senior left tackle Paul Jorgensen said Monday. “He’s a great player, and I’m really proud of him.”

Previous winners of the award for the Wildcats are linebacker Anthony Walker and safety Godwin Igwebuike, each of whom earned the recognition after making his first career start.

Looking ahead to NU’s Homecoming game Saturday, coach Pat Fitzgerald spoke highly of upcoming opponent Nebraska at his weekly news conference Monday. The No. 19 Cornhuskers are expected to pose a stiff challenge, having had a bye week to prepare for this matchup after falling just short against then-No. 10 Michigan State in their last game.

“They played outstanding against Michigan State,” Fitzgerald said. “Maybe one more minute and that game goes the other way.”

Nebraska and NU have a back-and-forth history in their past three meetings, with the Cats upsetting the then-No. 9 Cornhuskers on the road in 2011 before Nebraska won the next two in 2012 and 2013 in dramatic, come-from-behind fashion.

Adding to the buzz, Northwestern Wildside announced Monday the organization of a student section blackout to match the team’s all-black “gothic” Homecoming jerseys, which were revealed last week.

But in Nebraska’s Ameer Abdullah, Carter and the rest of the Cats defense will again face one of the nation’s best running backs after back-to-back weeks battling Wisconsin’s Melvin Gordon and Minnesota’s David Cobb.

Abdullah is currently second in the Big Ten in carries with 138 and is third in yards and touchdowns with 878 and 10, respectively.

“Different week and a different stud,” Fitzgerald said. “It’s a great challenge again for our defense.”

That’s a hurdle they’ll have to leap without starting middle linebacker Collin Ellis. The senior was ruled out for this week with a concussion, his second of the season, and will be replaced in the lineup by Walker.

“I’m going to prepare the same way I did … against Penn State,” Walker said. “I’m going to help the team any way I can.”

Elsewhere on the defense, senior safety Ibraheim Campbell is expected to return to his starting role this week, relieving Igwebuike.

Junior defensive end Deonte Gibson and Carter have ceded their starting spots on the depth chart to juniors Max Chapman and C.J. Robbins, respectively, which Fitzgerald said was just part of the normal defensive line rotation.

Finally, there may be some controversy brewing at punter, where redshirt freshman kicker Hunter Niswander is now listed next to usual starter Chris Gradone.

“We’re last in punting in the Big Ten,” Fitzgerald said. “It’s a little misleading because (Gradone) has been pretty good at getting them down inside the 20 … but you can’t have an 11-yard punt in crunch time.”

Fitzgerald made a similar switch last year after former punter Brandon Williams had a disastrous 8-yard punt against Michigan. He said Gradone had won the job up until now but that his status as the starter could certainly change in the coming weeks.

See our full coverage of the 2014 football season on our Gameday blog.