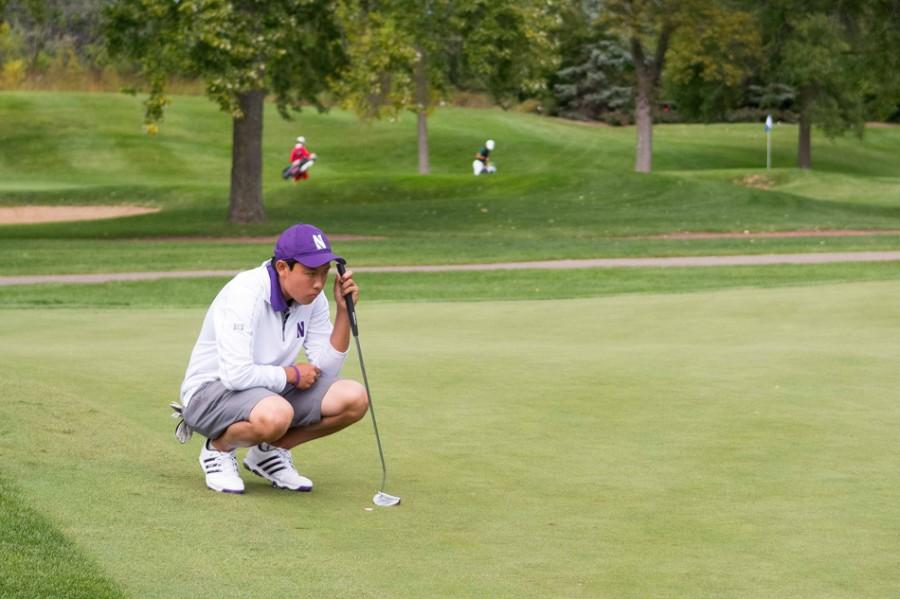 Dylan Wu continued his strong freshman season at the Rod Myers Invitational last weekend. Wu led the team with a 2-over 146 and tied at 23rd individually at the event.

For the second week in a row Northwestern was forced to battle taxing weather conditions and a slow start, this time rallying to pick up a sixth-place finish at the Rod Myers Invitational in Durham, North Carolina.

Originally scheduled as a 54-hole event, the tournament was shortened to 36 holes when lightning forced the suspension of the second round on Saturday. Weather threatened to halt play Sunday as well, but an early start allowed the event to finish before the worst of the storm rolled through.

“It was a bit strange because we were pulled off the course in bright sunshine,” coach David Inglis said. “We ended up sitting around by the clubhouse for a while before we got the all-clear. Then right as we were heading back out there was another lightning strike.”

After posting a first round score of 7-over 295 that left them in a tie for ninth with Iowa, NU came out hot to start its second round prior to the suspension of play, quickly moving into seventh place, where it remained overnight.

“It’s a little bit of a shame the suspension came when it did, because we had just started to play well and make up some ground after our slow start,” Inglis said.

When play resumed Sunday morning, the Cats again slipped down the leaderboard in the early going. As NU had the previous day, however, the team managed to claw its way back, using a late flurry of birdies to finish with a 5-over 293 on a cold and wet day that limited scoring opportunities.

The team has been forced to rally late following slow starts in each of its three tournaments this year, an issue that Inglis said will likely be a point of emphasis in the coming weeks.

“We’ll just have to do our best to figure out what the problem has been so far this year,” he said. “We’ll probably try to find a way to simulate some pressure situations before we play again in a few weeks.”

Despite the Cats’ early-round struggles, Inglis has been impressed with the way his squad has consistently been able to bounce back and regain traction.

“It says a lot about their resolve and their pride,” he said. “This is a group that fights until the very end, and that’s important when these tournaments come down to just one or two shots.”

The Cats’ sixth-place finish put them in the top half of the 12-team field and also made them the tournament’s top Big Ten finisher, with both Iowa and Michigan State four shots back in a tie for seventh.

Freshman Dylan Wu continued his streak of strong performances, leading NU with a tournament total of 2-over 146. Wu was the lone Cats player to card a round in red figures on the weekend with a Sunday 71 (-1), earning him a tie for 23rd place individually.

NU will have several weeks off before returning to action Nov. 3-5 in San Martin, California for the Gifford Intercollegiate.