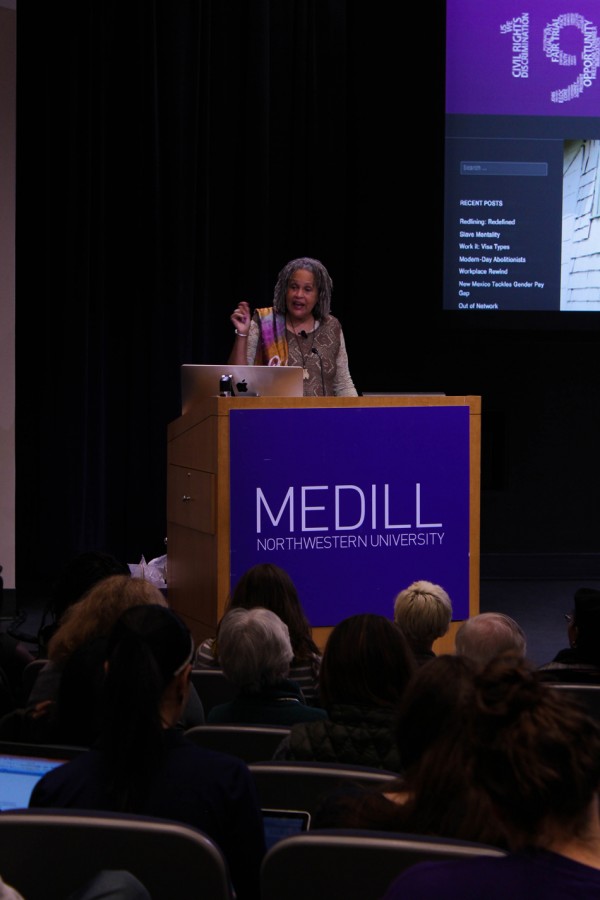 Former PBS and NPR correspondent Charlayne Hunter-Gault speaks at Medill about growing up in the 1960s. Hunter-Gault was one of the first two black students to enroll at the University of Georgia during the civil rights movement.

When Charlayne Hunter-Gault decided to study at the University of Georgia in the 1960s, she did not expect to become a figure in the civil rights movement.

“I think that wanting to be a journalist was my prime motivation when applying to the University of Georgia,” Hunter-Gault told The Daily on Friday, after speaking to a crowd of about 100 students at Northwestern. “I never thought that I was witnessing history or anything.”

Hunter-Gault, a former correspondent for NPR and PBS, came to NU as part of the One Book One Northwestern activity series this year that focuses on creating dialogue about race and identity. She was one of the first two black students to enroll in the University of Georgia.

Speaking at the McCormick Foundation Center, Hunter-Gault described growing up in a society where she said the slogan “separate but equal” only meant separate. She recalled the time she was told by her university’s dean that she would be suspended for her own safety after an angry mob went after her.

“I didn’t say anything,” she said. “I walked out with the dean into that still-lingering tear gas in the air and the next day the journalists asked me, ‘Well, are you afraid?’ and I said I wasn’t. They couldn’t believe it. At the time I didn’t realize why I wasn’t afraid of that darkness or the unknown.”

She was also involved with the Freedom Riders, a group of black and white civil rights activists who challenged the laws by riding public buses into segregated regions. She told the audience stories of the riders being targeted by angry mobs. Although the job was dangerous, Hunter-Gault said she was honored to be part of it.

“They had no idea why I was smiling,” she said. “I was so proud to be associated with the Freedom Riders.”

Addressing the crowd of mostly journalism students, Hunter-Gault highlighted the importance of the press.

Even after President Lyndon Johnson signed the Civil Rights Act in 1964, Hunter-Gault said she continued to “write for the defenseless.”

“See to it that every citizen, whether it is local or global, has news that are useful to them to make a better world,” she said.