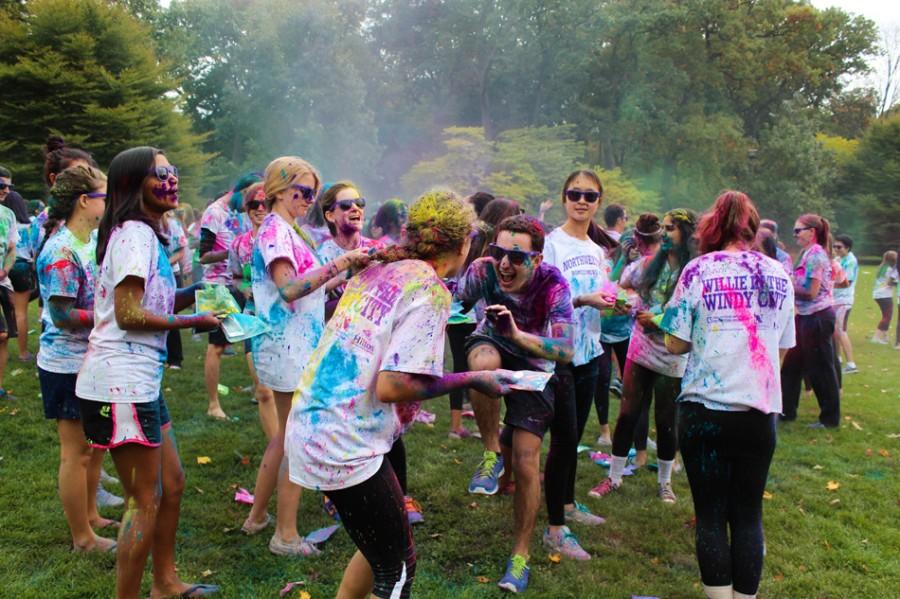 Students throw colored paint at each other at the third annual Color Roar on Deering Meadow. The event, which raised more than $1,500 for the Summer Internship Grant Program, was the first school-wide activity of Homecoming Week.

About 230 students kicked off Homecoming Week on Sunday with a rainbow assortment of paint packets at the third annual Color Roar.

Attendance fees for the event, during which participants threw colored paint at each other on Deering Meadow, raised more than $1,500 for the Summer Internship Grant Program, Homecoming co-chair Lakin Davis said.

“Every year I think it’s gotten a little bigger and a little better,” the Weinberg senior said.

This was the second year Color Roar has been used to raise money for the grant program, which provides a stipend for undergraduates who take unpaid internships during the summer. Davis said Homecoming organizers originally considered donating to a different organization every year.

“But it’s a great cause, and we love to give back within the Northwestern community,” she said. “That’s what Homecoming is all about.”

The event was the beginning of a week of activities that will culminate in the NU football game against Nebraska on Saturday. This year’s homecoming theme is “Willie in the Windy City” and Davis said events were planned with Chicago in mind.

After a food truck festival on Monday at Deering Meadow, Tuesday will feature a “speakeasy” in Scott Hall that harkens back to 1920s Chicago, Davis said.

At Wednesday’s Deering Meadow movie night, organizers will show “Divergent.” The film is based on a novel by NU alumna Veronica Roth (Weinberg ‘10) and set in post-apocalyptic Chicago.

The rest of the week will round out with a festival featuring carnival food and student DJs on Thursday and a student-alumni mixer Friday followed by the Homecoming parade and pep rally led by actress Ana Gasteyer (Communication ’89), this year’s grand marshal.

“We really liked the idea of celebrating Chicago, the city we’re so close to,” Davis said.