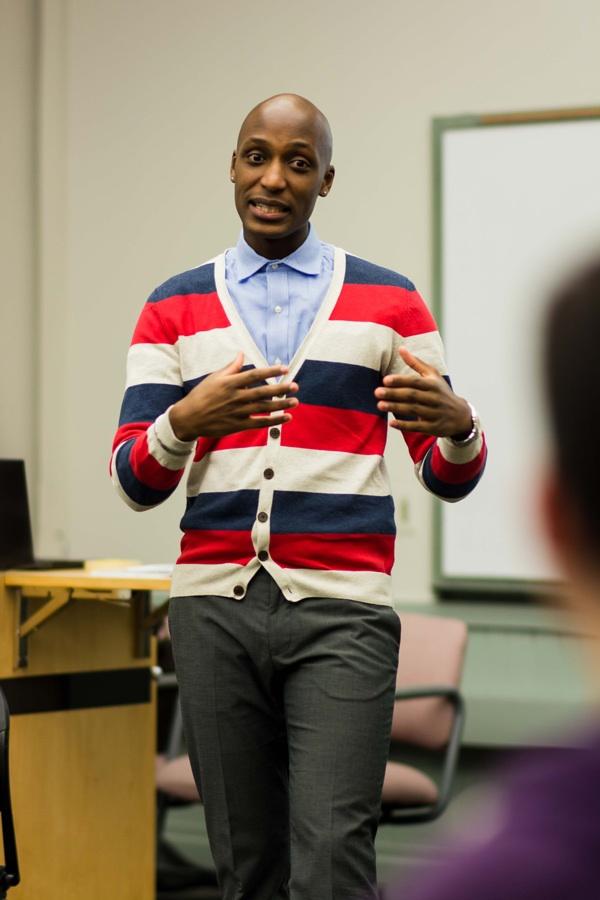 Rwandan genocide survivor Daniel Trust speaks to students during his Rainbow Week talk. Trust came to the United States in 2005 and today works as a motivational speaker and LGBT activist.

When he was 5 years old, Daniel Trust watched Hutu men hack his mother to death.

Today he lives in the United States, working as a motivational speaker and LGBT activist focused on inspiring high school and college students.

“I choose to focus on the future,” he said. “The future is bright.”

Trust grew up during the Rwandan genocide, the 100-day conflict between the Hutu and Tutsi ethnic groups that killed more than 800,000 people, mostly Tutsis.

His mother died, and a few weeks later, Trust’s father died. Two of his sisters were killed while hiding from Hutus, and his house was burned down.

Trust hid until his brother adopted him. He thought his luck had changed, but his brother abused him, whipping him if he didn’t clean the dishes well enough or got a math problem wrong.

He also suffered emotional abuse — Trust’s schoolmates bullied him for playing with girls.

He didn’t know what the United States was like, but he said he knew it would be better there. He applied for his visa and received it in 2005.

He settled in Bridgeport, Connecticut, and began his freshman year of high school. He would eventually graduate at the top of his class and attend Southern Connecticut State University.

After arriving at college, Trust began to feel attracted to other men.

“Growing up I was taught that being gay was a sin and that I had demons because I acted like a girl,” he said. “For me, it really brought me down. It made me feel like I was useless, like I was nothing when I went to school and called me names.”

During college, Trust attempted suicide. As he began speaking to a counselor, however, he felt more and more comfortable with his sexual identity.

In 2010, Trust saw an email at work about National Coming Out Day. When the day arrived, he came out in a Facebook post. While he received some positive feedback, his sister staged “an intervention” to address Trust’s sexual identity.

To his sister, “it was the devil using me,” Trust said. “I was committing a sin, and we needed to pray.”

His sister has since become more supportive.

Soon after, Trust began including his sexual identity in his talks.

“It’s very important for us who are already out to keep sharing our stories and to keep living visibly and to keep demonstrating for the younger people that there’s nothing wrong with us,” Trust said.

Communication senior Michelle Margulis, co-president of Rainbow Alliance, said Trust’s talk was coordinated with Coming Out Day, which is this Saturday, Oct. 11.

Trust implored the crowd to stand up against homophobia.

“You’ve got to say something when someone says something that’s ignorant,” Trust said. “Stand up and say something. People are gonna call you the weird kid, the kid that’s always starting trouble, but you’ll make a difference.”

When asked if he’d return to Rwanda, Trust said, “I’m not sure yet. I’m still in the healing process. I still find myself crying over that I thought I had let go, but I haven’t really let go. I’m not ready to go back to Rwanda yet, but I think I’ll go back someday. I was born there and I grew up there, but I found myself more here in the states.”