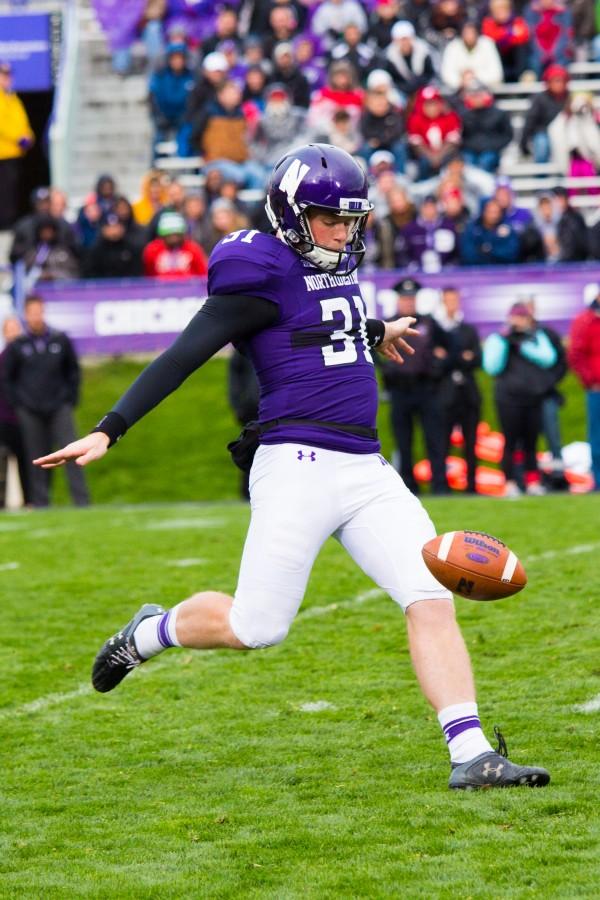 It’s fourth down early in the first quarter of Northwestern’s game against Wisconsin, and Chris Gradone is fidgeting in the backfield as he waits for the snap. Finally the count is called, and the ball sails into the outstretched hands of the junior punter.

He takes one step, then another, drops the ball out in front of him and swings his leg forward.

The punt isn’t powerful, but it is accurate, deftly rolling to a stop at the Badgers’ 6-yard line. It was the first of seven punts for Gradone and the first of four he landed inside the 20-yard line, a key stat that contributed to the Wildcats stifling Wisconsin’s offense Saturday.

Nonchalantly, NU’s secret weapon in the battle for field position trots back to the sideline. Punting is difficult, but this season Gradone has been making it look easy.

“The hardest thing about punting is definitely consistency,” Gradone said. “You can go out there and bomb balls all day, but if you can’t do it in a game, it doesn’t matter.”

The first-year starter has been busy this season, with 33 boots through five games, but has still managed to make all of them count by averaging 38.5 yards a kick to go with four touchbacks and 14 punts downed inside the 20-yard line.

More impressive is that he was unfazed by the unfavorable weather conditions against the Badgers, earning coach Pat Fitzgerald’s praise after the game.

“It was really important,” Fitzgerald said of his kicking game. “We knew it was going to be with the weather. … It was nasty early. It was wet. It was windy.”

Wind is obviously a big issue for punters, but not for the reason most fans think.

“More so than the crowd, the field or the rush, wind is definitely the biggest factor,” Gradone said. “It blows the drop, and the most important part about a punt is getting the drop right. If there’s a big wind, especially coming across, it can blow the drop and just hit on the wrong part of your foot.”

Most Cats fans will remember former punter Brandon Williams’ infamous 8-yard punt against Michigan last year. That’s what happens when the drop hits the wrong part of the foot.

But other than occasionally tossing a few blades of grass into the air, Gradone’s routine isn’t too much different from any other player.

“We get a good workout in on Monday, look at the film and figure out a game plan,” Gradone said. “Tuesday and Wednesday we try to work on the long game. Thursday is special situations.”

Gradone doesn’t fit into the oddball punter stereotype and eschews any strange game-day rituals. For him, the most important part of his preparation is maintaining his composure.

“(Punters) have a pretty different role on the sideline than most guys do,” Gradone said. “Ninety percent of the team is trying to get hyped, but if I go out there all amped up it’s not going to be effective. … We had a thing last year: ‘Margaritaville.’ We were trying to keep it like Margaritaville over by the net.”

Unfortunately for him, Evanston is no beach in October and November. But as fans witnessed Saturday, the cold and poor conditions don’t seem to bother Gradone much.

“Keeping your leg swinging over your head in 20-degree weather for four hours is tough,” he said. “But we have the heat can on the sideline, which is huge.”

As the weather gets colder and the games become bigger, defensive-oriented NU will continue to rely on the skills of its punter. But as long as Gradone’s big leg delivers big results, the Cats are putting themselves in a better position to win.