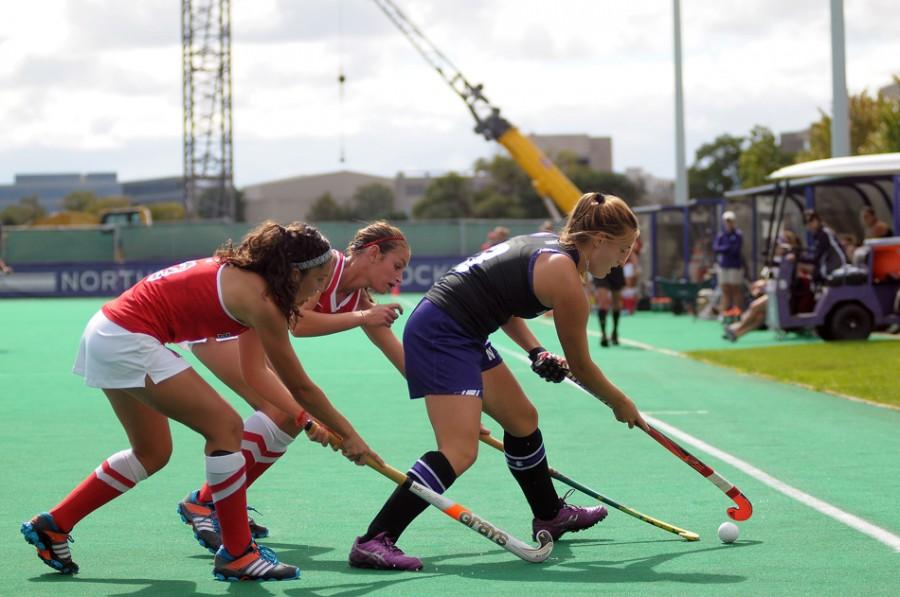 Dominique Masters fights off two defenders near the sideline. The sophomore midfielder is third on the team with 7 goals and also has four assists.

Both opponents are coming into the weekend with a lot of firepower. Stanford, behind the leadership of Alex McCawley, enters the contest on a six-game win streak. McCawley leads the team in goals, game-winning goals and shots and is second in assists. Despite having McCawley as a leader, Wildcats coach Tracey Fuchs sees the Cardinal as a mirror image of her team.

“Stanford is a little more like us,” Fuchs said. “They’re pretty balanced in their lines. They have a very good back (line) with Kelsey Harbin. They’re good across all lines. They’re having a great season at 12-1. We play a very similar style. It will be a very good matchup.”

Harbin leads the Stanford defense. She has won the NorPac Defensive Player of the Week twice this season and has played for the United States at the international level twice.

With the similarities between Stanford and NU comes the same style of play: fast and hard. Stanford, according to Fuchs, likes to spread the field and spread the defense out in order to seemingly out-man their opponent as they streak down the field. Fortunately for the Cats, their defense is ready.

“They have a pretty long aerial, which means if they’re stretching the field, it can sometimes turn into a bit of a footrace,” junior Lisa McCarthy said. “(We just have to make sure) we’re communicating switches with their forwards, marking in front of our players so when we see the ball coming, we can react quicker than they do.”

The last time Fuchs mentioned an opponent was similar to NU, the game, against Rutgers, went into overtime. In that match sophomore Isabel Flens scored the game winner to clinch the conference victory. With that battle so defense-heavy, the Cats expect much the same against Stanford.

“They’re both really solid teams on most aspects of the field,” McCarthy said. “It’s always tough playing against yourselves, but at the same time, we know our weaknesses so we might know theirs too. We’ll try to exploit those.”

Last time the two teams went head-to-head, NU came away with a victory, and junior Caroline Troncelliti led the scoring with three out of the four goals. The last Cats hat tricks came from both Flens and Troncelliti this year against Dartmouth.

“I would love another hat trick, but my freshman year, I was just at the right place at the right time,” Troncelliti said. “We had Chelsea Armstrong then who really set up those goals, and now I just hope that I can be the person to set up the goals.”

After the matchup against Stanford, NU takes off for Central Michigan on Sunday. The Chippewas and Cats have played each other since 1987, and NU leads the all-time series 10-3. The past two seasons, NU blanked Central Michigan.

Led by Cayleigh Immelman, the Chippewas are undefeated in conference and are facing the Cats after winning both their conference games the past two weeks. They will look for their third straight conference win on Friday when playing Miami of Ohio. Despite its losing record, Fuchs gives Central Michigan a lot of credit.

“They’re a blue-collar team that comes out and plays hard everyday,” Fuchs said. “Unfortunately, their record doesn’t reflect that right now. The good thing is our team has been so good at just playing one game at a time.”

This weekend the Cats look to extend their six-game winning streak. The first game against Stanford will also be beneficial as Ann Arbor, Michigan, where the two teams will face off,  is the site of the Big Ten Tournament this season.