The Sideline: Lenahan cultivates success, one goal at a time 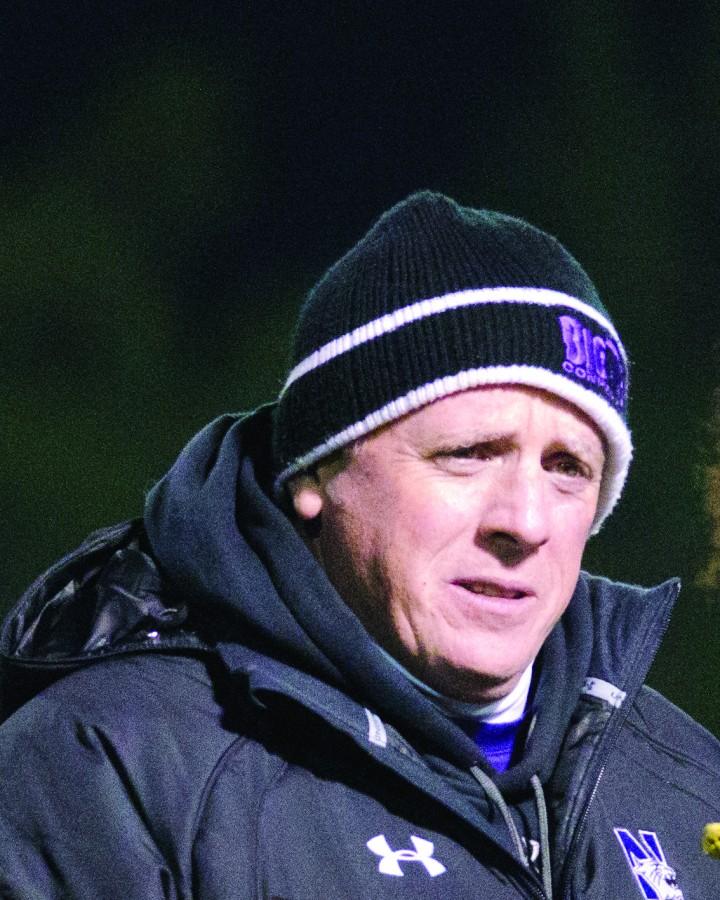 Coach Tim Lenahan has quietly built up men’s soccer into what he said he believes is the best men’s sports program at Northwestern. Under his leadership, the team has recorded 10 consecutive winning regular seasons and also won the Big Ten Championship in 2011 and 2012.

The familiar sounds of Lake Michigan echoed across the silence of Lakeside Field.

Sullen fans turned their faces from the wind and filed out of the cold bleachers, the scoreboard glowering at them from afar: “Bradley 3, Northwestern 2.” The Wildcats were out in the first round of the 2013 NCAA Tournament.

For followers of the program the loss was a bitter end to a disappointing season, one in which the Wildcats failed to capture what would be a third consecutive Big Ten title.

For players of the team the loss was a harsh defeat suffered at the hands of a squad that had already beaten them once that year.

For coach Tim Lenahan the loss was certainly a setback, but it was also another step in the long climb to lasting success for men’s soccer at NU.

‘Nobody has been better than us’

Lenahan might not strike the average observer as one of the top soccer coaches in the country.

His sideline demeanor is exceptionally calm, belying his intense nature but also representing his levelheaded approach to the game. It also masks the brilliant coaching mind that lies beneath, a deception that lends itself to success.

He sounds like any coach does when discussing his or her program: humble yet laudatory. Except when Lenahan claims soccer to be the best men’s team at NU, he’s actually right.

That success is even more impressive considering the program Lenahan took over when he was hired as coach in 2001. Every Cats team has had its historic dark age, but few are as ugly as the decade endured by men’s soccer.

Under previous coach Michael Kunert, NU suffered 12 consecutive losing seasons from 1989 to 2000. In that span, the team had just four Big Ten wins and had two campaigns, 1991 and 2000, which were entirely winless.

Lenahan has raised a program from the ashes, and part of that has been coming to dominate the Big Ten.

“In the (conference), we’ve been arguably the most consistent program over the past decade,” Lenahan said. “No one else has 10 straight winning seasons.”

In that stretch the Cats earned eight NCAA tournament appearances, captured the Big Ten regular season title in 2011 and 2012 and won the Big Ten Tournament in 2011.

Most impressively, that success was garnered against some of the toughest competition in the country. The Big Ten hosts the winners of 5 of the last 11 NCAA Championships, and Lenahan consistently schedules tough non-conference games for his team.

“We have three teams on our schedule – Maryland, Indiana and Notre Dame – that have all won national championships in the last five years or so,” Lenahan said. “Throw in Santa Barbara (which won in 2006) on the schedule, we’re playing against teams that are going to contend … but we’re very competitive with that group.”

‘It’s a model that’s proved to be consistent’

The key to maintaining that competitiveness has been Lenahan’s ability to recruit and scheme effectively.

NU is best described as a team that tries to defend well and counterattack efficiently. When that works it’s a thing of beauty, but when it doesn’t the result is something like last season: a team that slogged through three ties and three overtime losses.

“Now we’ve got a culture established, and we recruit kids based on that culture,” he said. “They don’t have to be defense first; they have to be team first.”

One such player is senior defender Nikko Boxall, an import from Auckland, New Zealand, who now captains NU’s back line.

“Coming from New Zealand, I didn’t hear a whole lot (about Northwestern),” he said. “Talking with (former assistant) Neil Jones, he said it was a great staff. He guaranteed that I would love it here, and he wasn’t wrong.”

The hard-nosed center back has come forward to contribute one goal and two assists this season, revealing some of the subtleties of Lenahan’s scheming, but Boxall believes the team is still fundamentally grounded in playing defense.

“It shows with our results statistically,” he said. “As a team we like to be defensively organized and that’s the mindset we start with.”

Defense is a common thread, but Lenahan’s genius doesn’t seem to lie solely in his ability to come up with effective game plans. Rather, some credit must rest with his skill in attracting quality talent to the program and his willingness to build his scheme around his players.

No one is more indicative of that than freshman forward Sam Forsgren, who has instantly stepped into the lineup this season to contribute six starts, a goal and an assist through 10 games.

Forsgren exemplifies the kind of adjustments that Lenahan makes. By prominently inserting Forsgren into the lineup and giving him freedom to roam the field, Lenahan has allowed him to quickly grow into the Robin for junior forward Joey Calistri’s Batman.

That Batman, a tremendously talented striker up front, is in another role Lenahan has done an excellent job of developing in his time at NU.

“We’ve had a defensive identity,” Lenahan said, “but we’ve also had an All Big Ten forward the whole time, which is six different players (including) Calistri.”

Calistri had 21 goals in his first two seasons and leads the team with four this year, in part thanks to the extra help he’s received up front.

It’s certainly a strategy that works. Lenahan has 10 consecutive winning seasons under his belt and he’s poised for 10 more, even if that means plenty of scoreless draws and 1-0 decisions along the way.