Football: From one Oct. 4 to another, it’s been a long year 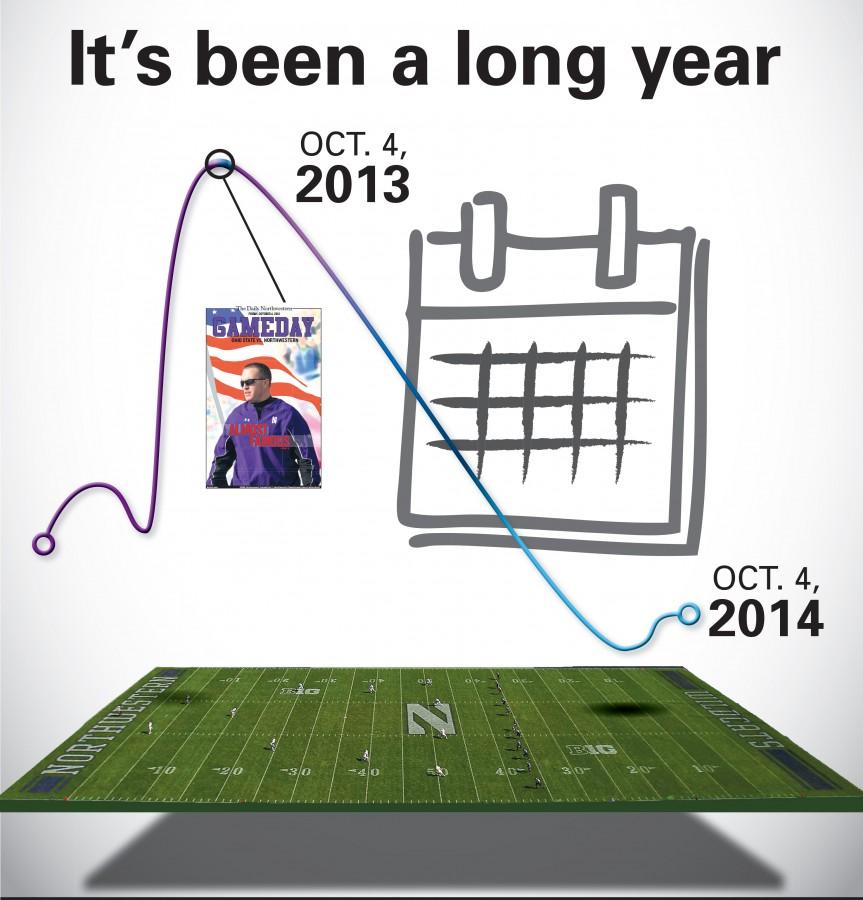 As the sun rose, ESPN’s Mike Greenberg and Mike Golic broadcast their talk show “Mike & Mike” from Deering Meadow in front of NU students who prioritized being on TV over sleeping. NU-affiliated sports TV personalities wandered the campus as if Evanston were a “This is SportsCenter” commercial.

Students who couldn’t tell a tight end from an endoscopy chose favorite Wildcats players. Bums who make sleeping until 11 a.m. a Saturday tradition planned for their pre-dawn trek to The Lakefill the following morning. Anti-socialites who would rather wither in the library than disrupt their studies shifted their schedules to make room for Saturday’s showdown: No. 4 Ohio State and No. 16 NU.

That morning’s Daily featured a movie-poster style Gameday cover, with coach Pat Fitzgerald beneath the headline “Almost Famous.” The accompanying story was premised on the idea that the football program was on the cusp.

The game didn’t go the Cats’ way, but nor did it disappoint. NU lost 40-30 in a game much closer than the final score indicates, in front of an electric sell-out crowd.

Scoreboard aside, no one denied the program’s ascension toward national relevance. Nothing, it seemed, could halt the climb.

Well, except maybe Wisconsin, who thrashed NU 35-6 the next week. And Minnesota, who upset the Cats at Ryan Field seven days later. And Iowa. And Nebraska. And Michigan. And Michigan State.

Since that triumphant game one year ago this weekend, NU has played 12 games and lost eight of them. Right when the program neared the peak of the mountain, it had let go of its rope.

This year, Oct. 4 falls on Saturday, and the Cats just so happen to host Wisconsin, the very team that commenced their free fall last October.

After practice Wednesday, Fitzgerald deflected talk of the Gameday anniversary.

“It’s October now,” he replied. “I’m done talking about last year. Every team is different, every set of circumstances is different. Obviously, we’re in a different position now than we were.”

But several breaths later — and without further prodding — he essentially confessed to what the Cats’ entire fan base was guilty of: being fooled by the team’s quick start to 2013 and blindsided by the collapse against the Badgers.

“I obviously let the team down, because I didn’t see the signs that we weren’t ready to play,” Fitzgerald said Wednesday. “Then we went up there and played terribly.”

At the time, that loss didn’t quite spark panic.

“It just looked like we didn’t execute very well,” Fitzgerald said after the game.

“All we have to do is make smart decisions and choices with the football and we win a football game,” he said after the following week’s loss.

The situation gradually became more dire. Senior running back Venric Mark injured his ankle against the Badgers and didn’t play for the rest of the season. The offense stalled, going entire quarters with no more than a few first downs.

The Cats lost blowouts and they lost close games. They lost as favorites and as underdogs. At home and on the road.

“It’s pretty unbelievable,” senior kicker Jeff Budzien said the same day. “It’s shocking. It’s depressing. If you told me we were 4-6 at this point in the year I would’ve laughed at you.”

“It’s definitely been a rough experience,” senior defensive end Tyler Scott said after the seventh and final loss, against Michigan State. “You never want to lose a game, but to lose seven in a row. It’s challenging.”

The season ended, mercifully, with a close win over Illinois, but the drama continued.

In January Colter announced his plan to form a players union at NU. The players’ offseason was in part spent learning about pros and cons of the proposed union and debating back and forth on its merits. Fitzgerald’s winter and spring included testifying at a National Labor Relations Board hearing and explaining to players why he thought they shouldn’t unionize.

Players repeatedly requested the focus return to football (“You can see that we want to move forward,” receiver Kyle Prater said in April. “We just want to keep playing ball.”), and Fitzgerald referred to the union as “that distraction.”

After a fairly peaceful summer, the Cats were ready to begin a fresh campaign when more trouble struck. Mark, healthy and ready to play, was suspended for the first two games of the season for an undisclosed violation of team policy. Five days later, he announced his intention to transfer, to be closer to his mother and grandmother in Texas, he said.

Still, hopes were fairly high for the 2014 season. Daily writers predicted seven or eight wins and a bowl appearance.

But two losses to start the season made nine in 10 games and inspired some heavy questions. Was the program systemically flawed? Had Fitzgerald’s magic run up? Was 2012’s 10-win season an illusion? Would Evanston experience a day like Oct. 4, 2013 any time soon?

All of which made last week’s surprise victory over Penn State all the more meaningful. Fair to say it was NU football’s first aggressively positive occurrence in a calendar year.

The Cats find themselves a long way from Oct. 4, 2013, when losses were occasional, unions were for steelworkers and mysterious suspensions were a problem for other schools.

In the coming weeks, the Cats can prove the previous year — not last week’s performance at Beaver Stadium — was an aberration.

“We’re getting tired of losing,” senior linebacker Chi Chi Ariguzo said Wednesday. “We want to get back to our winning ways, how we were.”