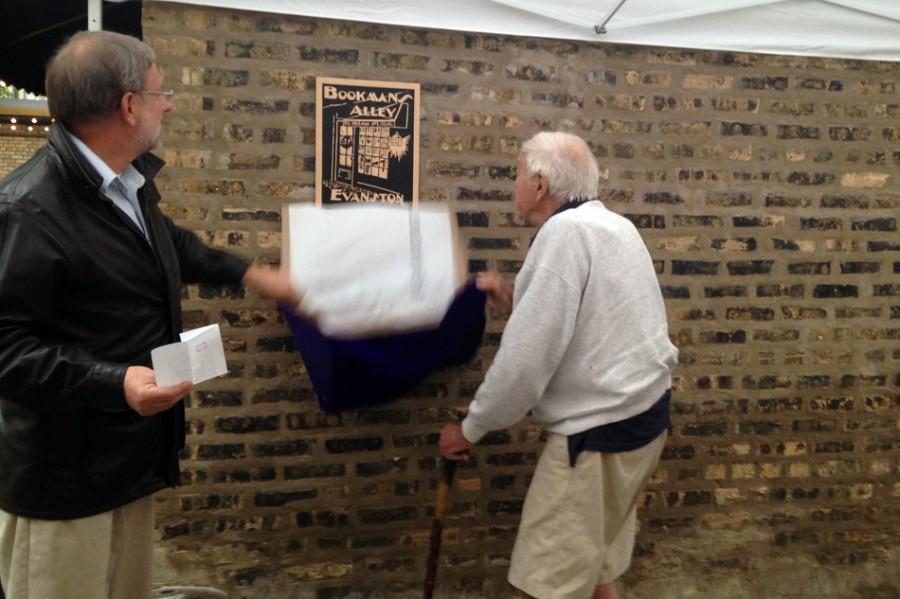 Roger Carlson, right, is presented a plaque outside of Bookends & Beginnings, located in an alley off of Sherman Avenue. The building once housed Carlson’s bookstore Bookman’s Alley, which closed last year after more than 30 years in Evanston.

The independent bookstore, which closed last year, and its owner Roger Carlson were honored in a ceremony Thursday.

During the ceremony, a plaque was unveiled on the building, located off of Sherman Avenue, celebrating the used bookstore’s presence in Evanston for more than 30 years.

“(Bookman’s Alley) was eclectic, personality-driven and fiercely independent,” said Garrett in a speech during the event.

After the commemoration, Garrett said he planned to show Carlson the interior of the bookstore. It was the first time Carlson would enter the new store, he said.

“We’ve been really nervous,” Garrett told The Daily. “We hope he likes it.”

Independent bookstores are unique because owners can make the store whatever they want it to be, Garrett said. He said that Carlson decorated Bookman’s Alley in an old-fashioned way, while Bookends & Beginnings is more post-modern.

Annie Coakley, the executive director of Downtown Evanston, organized the ceremony in partnership with Bookends and Beginnings and Alley Gallery. She said independent bookstores, along with independent stores in general, set communities apart from others, and they’re a huge factor in economic development.

Gibbons, who is NU’s Frances Hooper Chair in the Arts and Humanities, viewed Bookman’s Alley and Carlson in a unique way.

“He was a kind of non-academic literary institution, he and his store,” Gibbons said. “It was the kind of place you would go that was not like a university bookstore and not like Barnes & Noble.”

Gibbons first went to Bookman’s Alley when he moved to Evanston in 1981, around the time of the bookstore’s opening. Gibbons frequently visited Carlson at the bookstore, and Carlson even declared Gibbons the poet laureate of the store.

It was a store purely for readers and collectors, Gibbons said.

Lining the walls of the store were framed photographs and autographs of authors from the 19th century to the present. Carlson placed an assortment of unique objects around the store, Gibbons said, including an old football helmet, rugs, furniture and many other things. He said it was the most beautiful bookstore he’d ever seen.

However, only the books were for sale.

“(I liked) just sitting there, watching people come in and talk with him and ask for things and then come back and buy a lot of books,” Gibbons said of Carlson. “He always had funny things to say.”

Although Bookman’s Alley has closed, Gibbons said Evanston did not lose nearly as much as it could have. For a building that has had books in it for so long, he said it’s wonderful that it’s now a different store.

“I think it’s just tremendous that it’s surviving as a bookstore,” he said.

Correction: An earlier version of this story mischaracterized the organizers of the event. The Daily regrets the error.