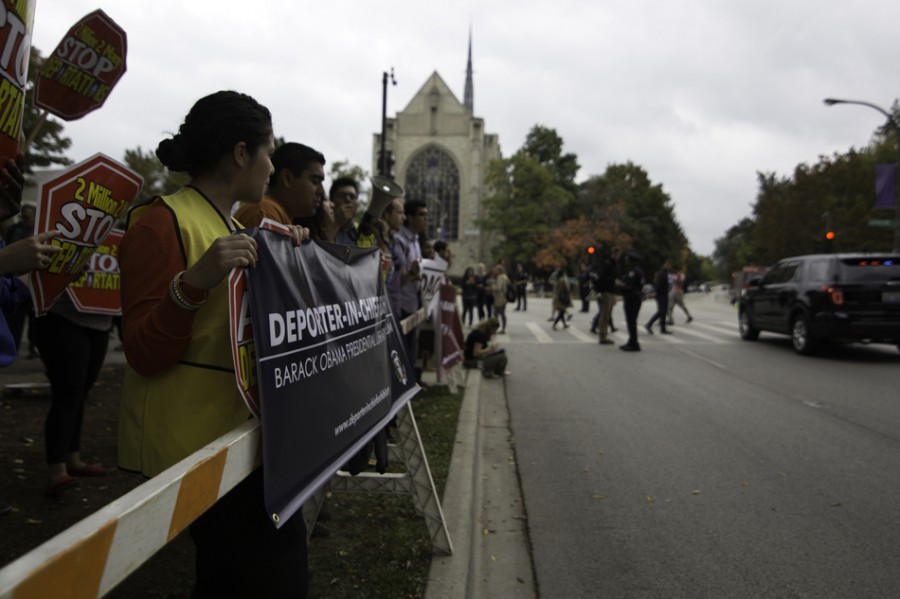 Despite the hoards of people lined up along Sheridan Road, not everyone was excited to welcome President Barack Obama to Northwestern on Thursday.

More than 50 students and community members crowded near The Arch holding large signs and chanting in protest of Obama’s policies on immigration, fiscal reform and international affairs.

Protesters held up posters with phrases including, “I paid thousands for a useless Degree #Obamaeconomy,” “How does this baby owe $39K in national Debt?  #irresponsible,” “Debt = Generational Theft” and “Who Will Obama Blame Today?”

Protesters began gathering at about 11 a.m., and the crowd continued to grow until after the president went inside Cahn Auditorium to give his speech.

Multiple NU students stood in packs crowding against the barricades as the motorcade approached Cahn.

“We thought it was ironic that President Obama is coming to Northwestern University,” Rodriguez said, calling NU “a campus that the culture and the atmosphere is hostile to its students of color, but at the same time, that hasn’t supported undocumented students.”

Rodriguez added Obama has deported more than 2 million people, more than any other president.

“Just like Northwestern has failed undocumented students and undocumented people in general, so has President Obama,” she said. “We are trying to make that connection by being here today.”

Leena Oudin of Turning Point USA said the group is focused on activism and student outreach to publicize the country’s large debt and failing job market.

“We’re basically just a group that’s fed up with the government,” the Aurora University senior said. “We’re almost $18 trillion in debt, and our tuition keeps going up. And yet when you come out of school, there’s not a whole lot of jobs.”

The group set up a booth at The Arch, giving out buttons and pamphlets with more information about their efforts.

Representatives from Americans for Prosperity, which has more than 60,000 advocates in Illinois, also voiced their dissatisfaction with the government by holding up signs and rallying behind ideas of fiscal reform.

“Essentially, Obama’s speaking, and you can’t even get into the event unless you’ve been selected, which just kind of speaks to pretty much like all of the problems that are going on in the government right now,” said Crissy Brown, field director of Americans for Prosperity in Illinois.

NU College Republicans released a statement on Sept. 30, saying they “unequivocally respect the Office of the President of the United States” and disapproved of any protests of Obama’s visit.

“It is in direct contradiction with our goal of creating meaningful campus dialogue,” the group said in a statement.

The protesters continued while Obama spoke. Weinberg sophomore Angel Ayon, who was protesting the president’s immigration policies, said their efforts were successful.

“Our voices are being heard,” Ayon said. “We’re strong. We’re still going on.”

Correction: In an earlier version of this story, The Daily printed a statement about NU College Republicans said by a member of Americans for Prosperity in Illinois. The Daily failed to make an attempt to corroborate the comment with NUCR before printing it. This story has been updated to reflect a statement from NUCR. The Daily regrets not contacting the group before publication.

For more on this story, visit our livestream and full coverage of Obama’s speech at NU.