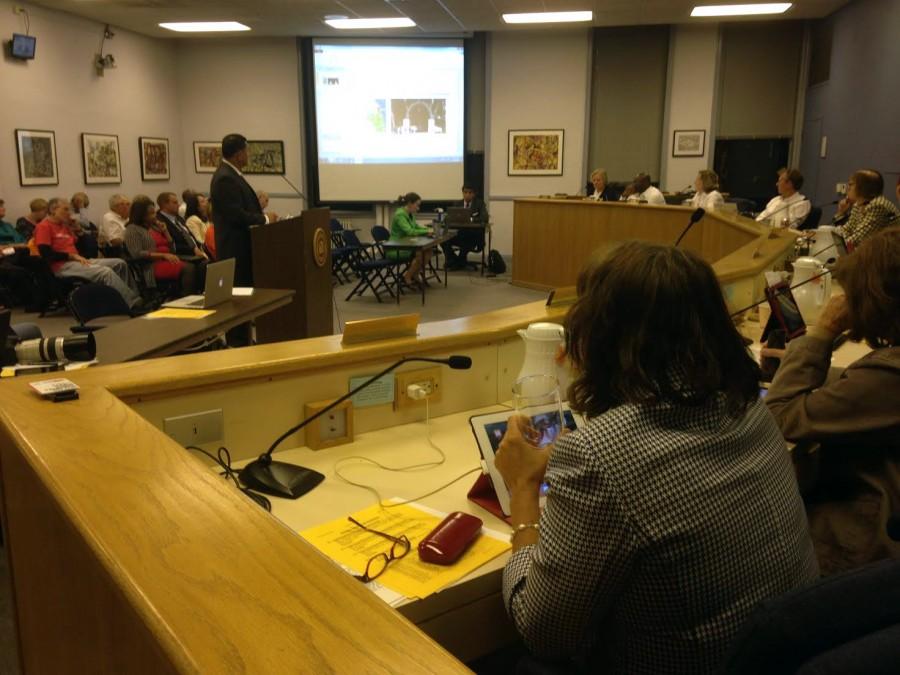 Sat Nagar, Evanston’s assistant director of engineering and infrastructure, presents plans to install bike lanes along Sheridan Road and Chicago Avenue. City Council decided Monday to delay the paths’ implementation until 2017 along the streets that run through Northwestern’s campus.

Aldermen approved the city’s request Monday to delay for two years the implementation of two-way bike lanes along parts of Sheridan Road and Chicago Avenue that run through Northwestern’s campus.

Parts of the Sheridan Road/Chicago Avenue Improvement Project also calls for traffic signal upgrades, resurfacing and reconstruction and street improvements. These plans were deferred to 2017.

The plans will be delayed due to construction on Emerson Street, Ridge Avenue and Green Bay Road, scheduled to be completed in 2016. Staff want to make sure that the street construction is finished before the construction for bike lanes on Sheridan Road begins, said Sat Nagar, the city’s assistant director of engineering and infrastructure.

Before the 2017 construction, there will be street restoration and work done on Sheridan Road and Chicago Avenue’s water main line from June 15 to Aug. 28, 2015.

Ald. Jane Grover (7th) said that while the city works on bike lanes for Sheridan Road, NU will be working on bike infrastructure, bike lanes and bike paths within campus.

“The University wants to also be developing their own bike plan, and so it all has to make sense together,” Grover said to The Daily.

Weinberg senior Erik Zorn, Associated Student Government executive vice president, spoke to council about the necessity of a bike path at NU. He said in a campus-wide survey of more than 2,000 undergrads last year, more than 95 percent wanted to see a Sheridan Road bike lane. Students wanted to see it implemented this year, Zorn said.

Ald. Coleen Burrus (9th) said the time element is important, but not as important as other aspects of the plan.

“I concur with Ald. Grover where it would be great to have it (constructed) next year,” she said. “But getting it right is more important than getting it done fast.”

Ylda Capriccioso, the city’s intergovernmental affairs coordinator, laid out the framework for an initiative and the next steps for bike policy in Evanston. The city centered the initiative on outreach, education and regulations on biking and plans to launch it by spring and summer 2015.

Aldermen emphasized the need and importance of providing greater education in visibility and regulations to students and cyclists.

Ald. Melissa Wynne (3rd) said she would like more education about biking given to School District 202 and Evanston/Skokie School District 65 students, as well as to NU students. NU bicyclists don’t realize how invisible they are to cars passing, she said, and she suggested NU provide reflective vests to its students.

Aldermen said they want to see a more comfortable relationship among bicyclists, motorists and pedestrians throughout the city. Ald. Mark Tendam (6th) said a middle ground needs to be established to alleviate hostilities that have been seen among the different groups.

“We all need to agree that we all have certain expectations when we meet at an intersection or when we’re on the sidewalk as a pedestrian and there’s bike traffic,” Tendam said.

Capriccioso said there are already plans underway to make more web resources available for bicyclists in response to a request from Grover.