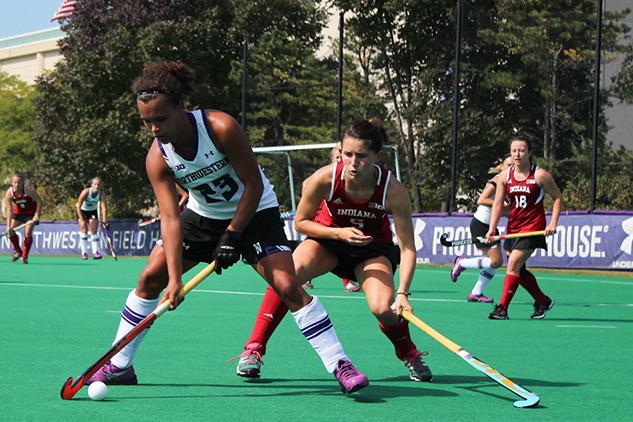 Sophomore Isabel Flens scored the game-winning goal in overtime Friday, as No. 13 Northwestern defeated Rutgers 1-0. Flens, the team's leading scorer for the season, scored again Sunday in the Wildcats' 3-0 win over No. 17 Indiana.

The Wildcats faced off against the Scarlet Knights for the first time in program history and showed them what NU field hockey is all about. After having trouble against Rutgers’ nearly stifling defense, sophomore Isabel Flens notched the game-winning and only goal of the match with seven seconds left in overtime.

“We respect them, but then as soon as we get the goals going, we take over,” sophomore Dominique Masters said. “It was so nice getting our first shutout. We just take our time, get the goals going and welcomed them to the Big Ten in a way. (We) showed them what they’re missing.”

This past week, coach Tracey Fuchs noted that Rutgers, despite never playing NU before, had very similar characteristics to the Cats. The game was dominated by physical, fast defense, led by NU junior Lisa McCarthy.

“Lisa is as solid as any defender in the conference,” Fuchs said. “She makes almost as many saves as (senior goalkeeper) Maddy (Carpenter). She has really good communication skills. You’re not going to get by Lisa as much.”

McCarthy has helped lead NU’s defense to only allow opponents to average 10.6 shots per game this season. A big help for the defense is Carpenter’s ability to stop almost any shot on goal. Opponents average just above 1 goal per game while the Cats average 3 goals. The consistency Carpenter, McCarthy and the defense play with allows the offense to focus on their aggressiveness and goal-scoring abilities.

Against the Hoosiers, the NU had no trouble asserting its dominance early in the contest with junior Caroline Troncelliti putting the ball in the net within the first seven minutes of regulation. On their way to a second consecutive shutout, the Cats kept scoring, with goals from Masters and Flens.

“Seven out of our last ten games we’ve won or lost by only one goal,” Fuchs said. “To come out and give ourselves a lead and protect it, I’m very happy with the performance, especially in the second half.”

“Finally, I feel like we’re getting into the swing of things,” McCarthy said. “Our press is going really well. Our defense starts with our forwards and if they’re doing their job, then we don’t really have much to do in the back. I’m really impressed how much our press has transformed since the beginning of the season.”

NU capped their home stand with four straight wins, allowing only 3 goals in those games. The Cats continue the conference schedule against Iowa next weekend.