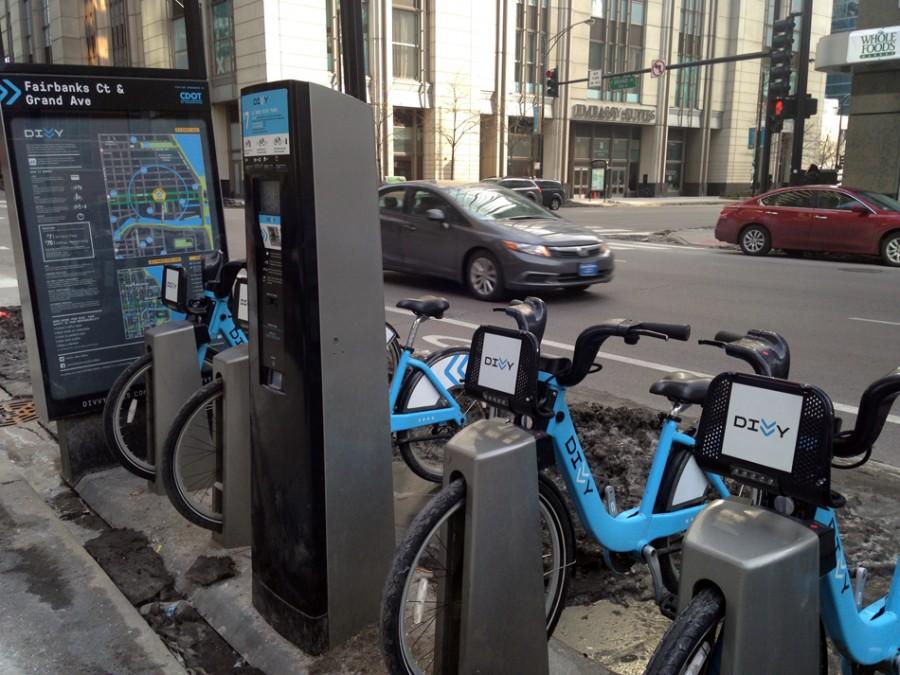 Divvy bikes sit at a rental station in the city of Chicago. The bike sharing service will come to Evanston in spring 2015.

Starting next year, the city will install eight Divvy docking stations, according to a news release from the governor’s office. The state’s $3 million investment in the program will help fund 700 new bikes and 70 stations across Evanston, Oak Park and other Chicago neighborhoods.

The three cities will collectively contribute $750,000 for Divvy’s expansion to add to the state’s $3 million investment.

Evanston will give $108,000, which will come from various sources in the city budget and possible station sponsors from the private sector, city manager Wally Bobkiewicz said in an email to Evanston media.

City Council will decide where in Evanston the bike stations will be located, he said. The city is also in talks with Northwestern to team up and introduce stations at or near campus, he said.

“The Divvy program has proven to be a successful and innovative way to commute, navigate congested city streets and explore vibrant Chicago communities,” Quinn said in a news release. “Expanding Divvy outside of the city limits means fewer cars on the roads and gives more residents and visitors the fun opportunity to take a ride.”

Evanston Mayor Elizabeth Tisdahl also announced that the service would be coming to Evanston at the city’s annual Bike the Ridge event on Sunday.

The free event closed off Ridge Avenue from Howard Street to Church Street to vehicular traffic, allowing bicyclists to ride in a noncompetitive atmosphere.

Divvy will help improve residents’ health and lower the city’s carbon footprint, Tisdahl said at the event. The service fits in with Evanston’s Livability Plan, which aims to make Evanston a more bikeable city and to reduce the city’s green house gas emissions 20 percent by 2016.

In April, the Illinois Transportation Enhancement Program denied an application to fund the expansion of the Divvy program to Evanston. The city and the Chicago Department of Transportation had originally applied in August 2013 for $3 million in grants. Although no money was allotted for the bike service, Evanston received money through the same funding program to put in a bike path through NU’s campus.

The Chicago Department of Transportation created Divvy in 2013 to provide to residents and tourists alike an alternate transportation option. More than 200 cities currently have bike-sharing systems, including London, New York and Boston, according to the Divvy website.