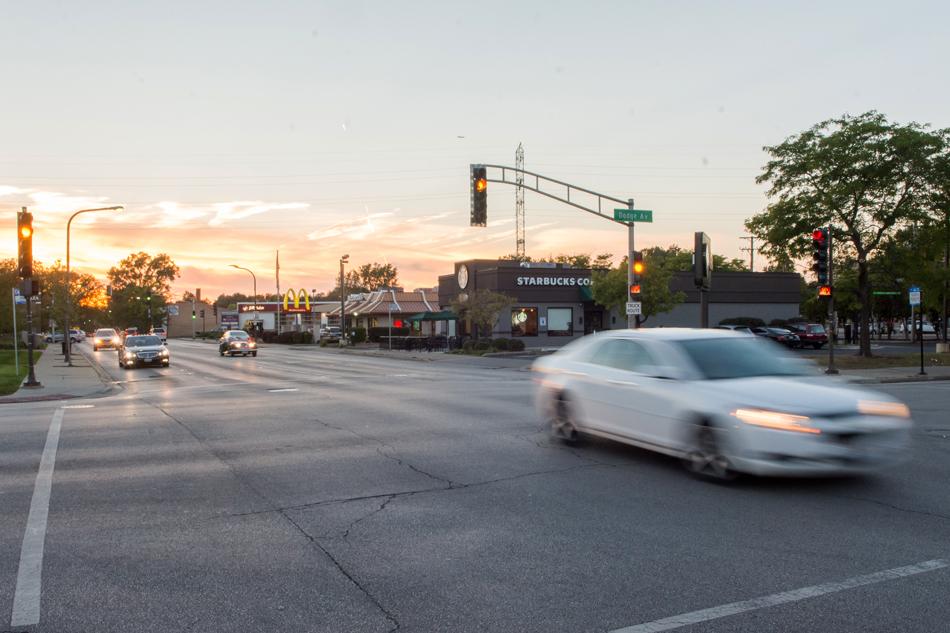 Cars pass by the newly opened Starbucks at Dempster Street and Dodge Avenue in southwestern Evanston on Tuesday night. The area has seen a series of new business openings as part of an ongoing development project.

The intersection of Dempster Street and Dodge Avenue continues to develop with the recent addition of multiple new businesses, including Starbucks, a grocery store and plans for a health center to expand its space.

An area that has been subject to years of vacancies and foreclosed properties, the intersection will be further improved with the new influx of business openings, Evanston’s economic development coordinator Paul Zalmezak said.

Local grocery chain Valli Produce finalized its purchase of the Evanston Plaza shopping center, located at the corner of the two streets, on Thursday. The space lost its biggest store, Dominick’s, when the supermarket closed all of its locations in the Chicago area in December 2013.

“We felt it was important to purchase the shopping center to improve the overall shopping experience at Dempster and Dodge,” Valli Produce owner Frank Greco said in a news release. “The retail offerings at this plaza have been stagnant for several years and we hope to revitalize its potential.”

Valli’s owners intend to expand the Dominick’s space to create a bigger supermarket, as well as improve existing storefronts and relocate others to make the entire shopping center more convenient for customers.

“It’s already a stable neighborhood, but we’re hoping it will stabilize property values, it’ll attract other businesses,” Zalmezak said. “I think it boosts the spirits of some of the residents and merchants there who felt that their neighborhood had been forgotten.”

The Heartwood Center, a holistic health services center in Evanston, purchased two properties at the intersection in August. The purchases were made as part of an effort to revitalize the area, according to a news release.

“They purchased the properties not only to beautify the neighborhood, but they also want to provide more opportunities for the community to get involved with Heartwood,” said Christina Giordano, Heartwood’s marketing manager.

Heartwood opened in Evanston in 1999 and currently provides yoga and massage therapy, among other services. The center has plans to make the new space the face of a new “healing corridor,” which would become a hub for healing and wellness in Evanston, Giordano said.

“Dempster and Dodge has a pretty bad reputation,” she said. “It’s been known as a little seedy. We want to improve it, because it is part of Evanston, which is one of the most beautiful suburbs of the North Shore. We want to make it more tourist friendly and more community friendly.”

A Starbucks, complete with a drive-thru window, opened earlier this month in the area.

Other businesses that will soon open at the intersection of Dodge Avenue and Dempster Street are Goldfish Swim School, which City Council approved Sept. 8, and an indoor soccer facility, Zalmezak said.