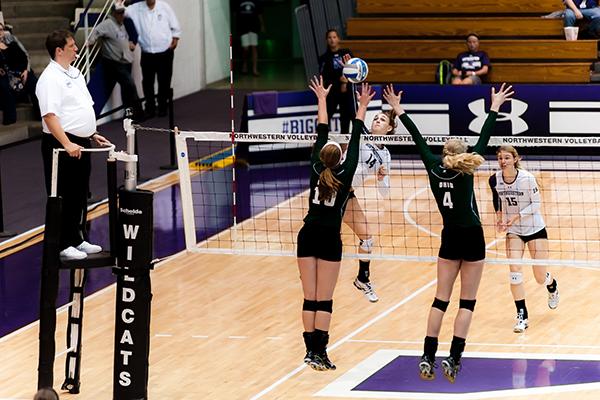 Senior Katie Dutchman slams the ball over the net in Northwestern’s Thursday night match with Ohio. Dutchman hopes to carry the Wildcats to the NCAA Tournament, after the team just missed out last year.

The match was a cat fight from the start, as the Wildcats and Bobcats traded points back and forth in the first set, with neither team ever gaining more than a three point lead.

The Wildcats began to pull away halfway through the set after a big block by Katie Dutchman in the middle that forced the Bobcats to call a timeout to try to stop the momentum. The Bobcats fought back, eventually taking a 23-22 lead, but the Wildcats outscored the Bobcats 4-1, taking the first set 26-24.

Ohio did not seem too rattled after the first set, coming out early in the second set taking a commanding lead. A late push led by senior Yewande Akanbi was not enough to overcome the wide margin, and the Wildcats dropped the second set 22-25.

“Even though we lost the second set, we were down 13-5 and 22-15 and we came back and got the momentum and that’s huge,” Dutchman said. “It speaks so much to how much fight our team has and how much confidence we have in each other.”

Senior Monica McGreal’s two aces, along with two kills by freshman Symone Abbott, helped Northwestern get back on track in the third set. The Wildcats took control, but the Bobcats would not go away easily. The Cats eventually pulled away, winning another close set 25-21.

The intensity increased in the fourth set. The Cats remained in control until the Bobcats finished off the set with 5 unanswered points, stunning the Cats 20-25.

“Our team is really tough,” Akanbi said. “We are going to make teams earn their wins. We’re not just going to give it to them. We were down at so many points but we want to learn from it and play better next time.”

The fifth and deciding set was much like the first four, with both teams scratching for every point. Neither team let up, and the cardiac Cats won the fifth set 17-15.

“The biggest key to the victory is that we let players step up,” coach Keylor Chan said. “It wasn’t the prettiest game, but everybody buckled down and played tough.”

The win was the Cats’ ninth win in 10 matches this season.

NU opened the season at the NIU Invitational on the road in nearby DeKalb, Illinois. The first match of the season was a thrilling come-from-behind win over Colorado. The huge victory carried over to the rest of the tournament, which they won by winning the next two matches in straight sets.

NU added two more victories in the USD-SDSU Challenge in San Diego before finally being brought down by host of the tournament, then 15th-ranked San Diego.

The Cats quickly bounced back from the loss by coming home and winning the Wildcat Classic, easily beating Youngstown State, Loyola and Virginia.

The Wildcats are currently ranked 12th in the nation for hitting percentage and 40th in kills per set. Based on their early season play, NU appears a candidate to reach the NCAA tourney this year, after falling just short in 2013.

This will not be an easy task after losing All-American Stephanie Holthus, NU’s all-time leader with 1,797 kills.

“We turned the page,” Chan said. “And I think you fill the void with other players, giving other players opportunities and now they’re shining. It’s fun to see other people grow.”

In the first 10 matches, this growth was seen in the stellar play of a few individuals, especially Dutchman and Akabi.

Next up for the Cats is a matchup against Green Bay on Sunday. This is the final nonconference match before Northwestern opens Big Ten conference play.