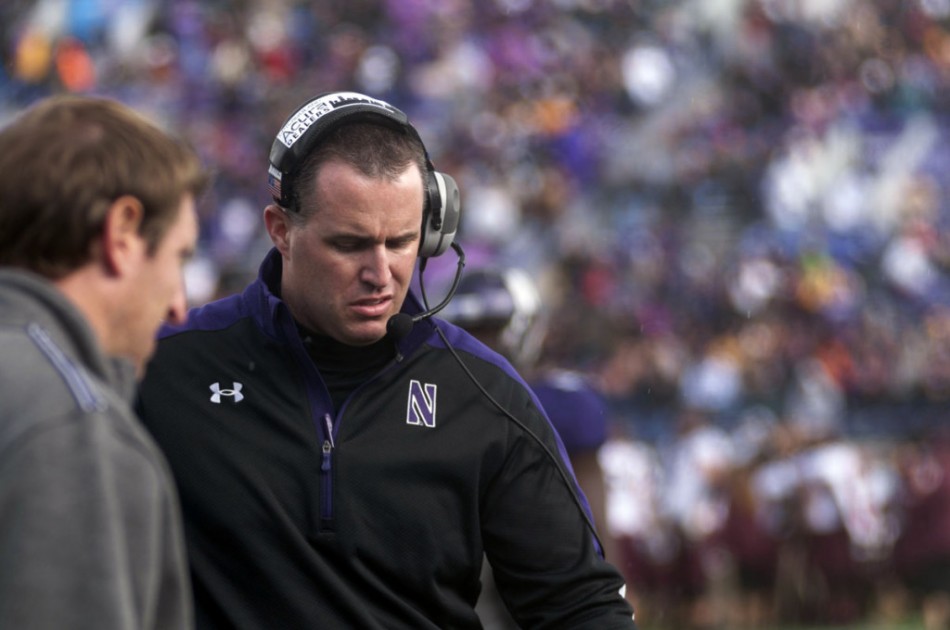 1. Lower your expectations for this season

That was … not pretty. Northwestern came out flat and never really seemed to snap out of it. Even as they cut into Cal’s big lead, the Wildcats looked lifeless. The Cats went down 17-7 early, and seemed to take two steps backward every time they took one forward, most egregiously giving up a 76-yard touchdown pass the play after scoring to cut Cal’s second-quarter lead to 10 points . NU looked unprepared for the one real wrinkle the Bears had, using freshman quarterback Luke Rubenzer in run-heavy sets, and only manufactured one big play, a 54-yard catch-and-run touchdown pass from Trevor Siemian to Cameron Dickerson that required multiple errors in the Cal secondary.

If that was the best “comeback” NU had to offer, it wasn’t much. It consisted of one good drive, a fluky interception, and a clever bit of trickery that was exciting but reflected more a lack of faith in the regular offense’s ability to pick up 17 yards than any special coaching wizardry. NU never established anything consistent on offense. Treyvon Green, who had his coming out party after Venric Mark was injured last year against Cal, ran for just 37 yards on 13 carries. Siemian had his moments, but missed far too many easy throws and wasn’t helped any by a number of drops.

Cal hardly turned in a perfect storm of a performance. The Bears couldn’t bleed any clock in the fourth quarter and committed silly penalties at bad times. Their wide receivers didn’t give Jared Goff any help, including somehow gifting Collin Ellis his third deflected interception against Cal in two years. Rubenzer threw a terrible interception to Ibraheim Campbell in the first half that quenched another scoring opportunity. This game mostly looked like one not-very-good team simply out-executing another not-very-good one.

2. Northwestern’s coaches have to be more aggressive

Even if it’s just perceived, it sure seems like this is a program that is caught in a rut. The Cats have now lost eight of their last nine since they took a fourth-quarter lead way back in October 2013 against Ohio State. It can be a cliche, but sometimes teams really do have to make their own luck. A team that will rarely have a distinct talent advantage, the Cats are going to have to play a more high-variance style. That doesn’t mean, despite coach Pat Fitzgerald’s most vehement protestations, ditching solid football fundamentals. It means putting someone back to actually field and return punts, trusting your offense to pick up fourth-and-shorts (especially given the disaster that is NU’s punting situation) out of their normal sets, and sending blitzes at strategic times when your defense can’t get off the field.

Part of this is simply having better awareness of the game situation. Down 31-7 midway through the third quarter, there was a decent chance that NU would have a chance to score three more times but not four. But when the Cats scored a touchdown to cut the lead to 31-13, the team elected to kick the extra point, leaving itself three scores down. Sure enough, the Cats scored two more times after that, but were unable to add a third touchdown. If NU had gone for two and gotten the lead to 31-15 , they might have had a shot to tie the game much earlier. Too often, NU’s coaches seem unprepared for the unusual scenarios that pop up during a football game. In the first half, they sent the offense out for a 4th-and-2, burned a timeout, and then decided to punt instead. These should be simple decisions, and I suspect the team would execute better if they were receiving a consistent message about what calculated risks were expected in different game situations instead of constantly being yanked on and off the field.

For as bad as they looked in the first half, the Cats showed signs of being a competent football team in the second. After going down 14-0, the defense responded well, only giving up points on short fields and one blown coverage that led to a long touchdown. When the team needed key stops in the second half,  NU mostly came up with them. Newcomers Justin Jackson and Solomon Vault acquitted themselves well, with each averaging five yards per carry and Jackson notching the first of what should be a slew of career touchdowns in purple. Siemian showed off a sneaky athleticism, picking up a couple key first downs with his legs and even catching a touchdown pass. With a full season as the guy, he should continue to cut down on his mistakes and grow into the role.

There are reasons to think this Cal team is much better than last year’s 1-11 catastrophe. Goff, in his second year running Sonny Dykes’ “Bear Raid” offense, looked more poised in the pocket after a turnover-prone freshman year and Rubenzer adds a new wrinkle that should bolster the running game. New defensive coordinator Art Kaufman has Bears fans enthusiastic that Cal won’t hemorrhage points like it did last year. Cal may not win many more games in a stacked Pac-12, but we may well look back on this game at the end of the year not as a disastrous loss but simply a disappointing one.

Though NU was one of only two Big Ten teams to lose on Saturday, the rest of the conference hardly inspired confidence. Michigan, Nebraska and Maryland easily dispatched weaker opponents but Ohio State, Iowa, Illinois and Penn State all had varying degrees of close calls. Nobody on NU’s schedule looks like they will be unbeatable. But if the Cats even want to get to bowl eligibility, there are major issues that need fixing.