Northwestern alums out in full force at Emmys 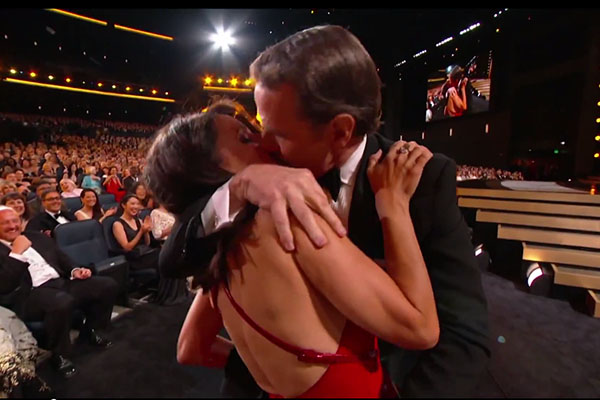 Northwestern — specifically the School of Communication — was well-represented Monday night at the 66th Primetime Emmy Awards in Los Angeles, with alums snagging three of the top trophies, the hosting gig and a liplock with Bryan Cranston.

Colbert won two awards including best variety series for his Comedy Central satire show “The Colbert Report,” beating Jon Stewart, who had a 10-year winning streak until 2013. For her work in AMC’s “Breaking Bad,” Gunn grabbed the Emmy for best supporting actress in a drama series. Louis-Dreyfus was awarded best lead actress in a comedy series for her vice presidential role in HBO’s “Veep.”

On her way up to the stage, Louis-Dreyfus was intercepted by a long kiss from Gunn’s onscreen husband Bryan Cranston, who played one of Louis-Dreyfus’ love interests in “Seinfeld.”

The two presented an award on stage together earlier in the show and Louis-Dreyfus pretended not to remember Cranston’s guest stint.

“I have to tell you, you look so much like the actor in ‘Seinfeld’ who played the dentist that I dated as Elaine,” she joked.

Other Wildcats also got shout-outs during television’s most prestigious awards show.

Maria Ferrari (Communication ‘01) and Jill Leiderman (Communication ‘93) were up for Emmys as executive producers of CBS’s “The Big Bang Theory” and ABC’s “Jimmy Kimmel Live,” respectively, but neither got the best series nod.

The slew of NU grads didn’t go unnoticed by the School of Communication, which devoted much of its Twitter feed to cheering on alumni.
Bounty to be paid to whomever gets a photo of Anna Gunn, Stephen Colbert, Julia Louis-Dreyfus, and Seth Meyers together at the Emmys!

“We have a magazine to fill, people,” the School of Communication said in its tweet.