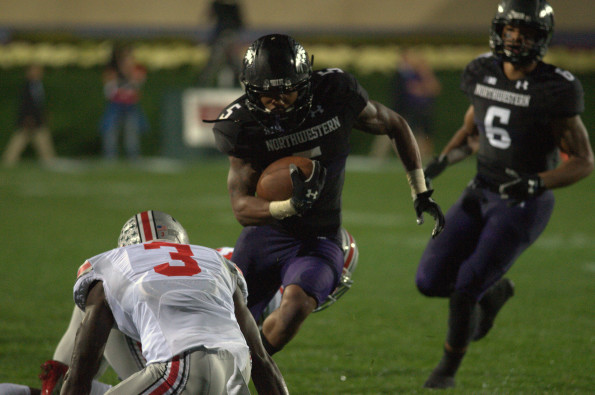 Senior Venric Mark enters 2014 as Northwestern's starting running back, looking to duplicate his 2012 success. Mark will be backed up by senior Treyvon Green and sophomore Stephen Buckley, who emerged last year as Mark battled injuries.

What to watch for:

The injury-plagued mess of a season then-senior Venric Mark endured in 2013 came with a silver lining for Northwestern: the emergence of several capable backs.

With Mark out almost the entire season with an ankle injury, then-junior Treyvon Green and then-redshirt freshman Stephen Buckley showed flashes of brilliance when not battling injuries of their own.

Green led the Wildcats with 765 rushing yards, including 129 against Cal, 158 against Western Michigan and 149 against Nebraska. Buckley burst out with 99 yards rushing against Iowa before tearing his ACL against the Cornhuskers.

That duo will back up Mark, who rushed for 1,366 yards and 12 touchdowns in 2012 and returns this fall for one final year in purple.

Tempting as the “question Mark” pun is, the real mystery lies not with Venric but with Buckley.

The sophomore is expected to be ready for week one, ahead of the original timetable after his aforementioned knee injury, coach Pat Fitzgerald told media this week, but it’s fair to wonder if Buckley will be 100 percent to start the season.

Even if Buckley is healthy, extensive playing time is no guarantee, with the bruising Green likely to complement the speedy Mark as the primary back-up.

Can Mark be as successful as he was in 2012 without departed quarterback Kain Colter?

Much of the back’s breakout success came via the read option, which will be less a part of the offense with the less-mobile Trevor Siemian running the offense. NU will do what it can to get Mark the ball in space, but he may have to run the ball up the middle more often than would be ideal.

If Mark, Buckley and/or Green goes down, sophomore Warren Long could be this year’s surprise breakout. Long contributed in 2013 as a true freshman but might be somewhat buried this year if everyone stays healthy.

If the injuries strike the running back position with anywhere near the force of last year, Cats fans could be introduced to freshman Justin Jackson sooner than planned. If the backfield stays healthy, the highly touted recruit from Glenbard North High School could redshirt his freshman year.