Aldermen allow Next Theatre to operate through upcoming season despite debt 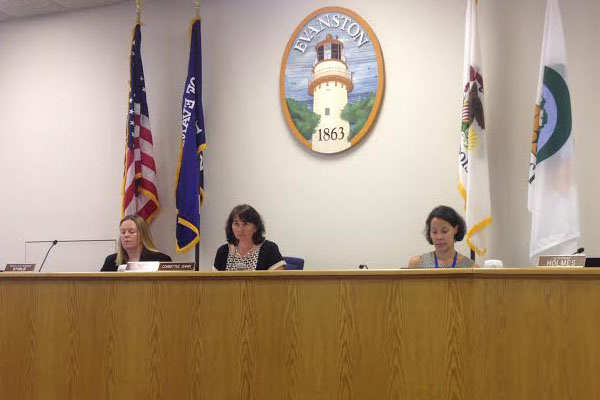 Ald. Coleen Burrus (9th) presides over a meeting of the Human Services Committee, which she chairs. The committee voted to allow Next Theatre Company, which is more than two years behind on its rent, to continue to operate out of the Noyes Cultural Arts Center for its upcoming season.

Aldermen voted Monday to allow Next Theatre Company, which is more than two years late on lease payments to the city, to stay in the Noyes Cultural Arts Center for its upcoming season.

The committee also approved a payment plan allowing the theater to repay its debt over the next five years with 2 percent interest compounded monthly.

The theater owes more than $75,000 in overdue rent, city staffers wrote in a memo to aldermen on the Human Services Committee for its Monday meeting.

Aldermen on the committee agreed to allow the theater to operate through its next season — which is scheduled to run from September through May — despite its outstanding debt.

“This is a really reasonable way to approach this,” Ald. Judy Fiske (1st) said. “I’m very reluctant to just pull the curtain down on Next Theatre.”

The theater has been a tenant in the Noyes Cultural Arts Center, 927 Noyes St., since the company was founded in 1981. It shares its current space with the Fleetwood-Jourdain Theater, which has its season from June through August.

City manager Wally Bobkiewicz recommended that aldermen allow the theater to operate through its 2014-2015 season because the company already has productions scheduled. He added that in the meantime, the city will try to find another production company “able to program the theater in much the same way Next has.”

“It’s an unfortunate occurrence — the Next Theatre has been a tremendous asset.” Bobkiewicz said. “It has put on some of the most interesting, innovative theater in Evanston. It has seen the growth and the emergence of several national actors and national playwrights.”

Next Theatre’s 34th season, “Heroes and Villains,” begins in September and features four plays, including “Richard III” by William Shakespeare. Dates for the final production have not been released.

No representatives from Next Theater were present at the Monday meeting.