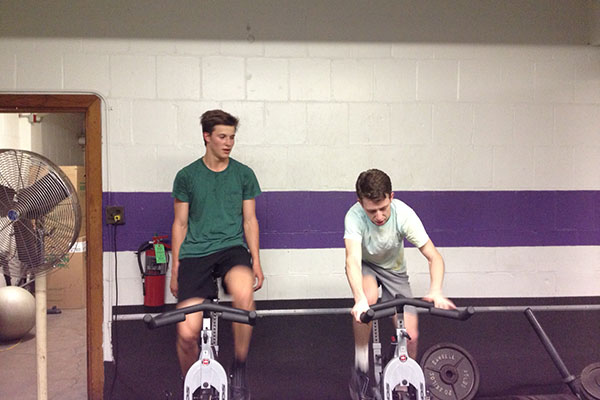 Rising sophomores Jacob Frazer and Alfie Astor train for their upcoming 3,000-mile bike ride across South America. The two students are hoping to raise $3,000 for the South American charity, TECHO.

Two rising sophomores are set to embark on a 3,000-mile bike ride across South America.

Jacob Frazer and Alfie Astor leave Tuesday for Arequipa, Peru, where they will begin their ride in hopes of raising $3,000 for the South American charity TECHO.

“This is going to be a total adventure, total journey, and the biggest physical and mental challenge that I’ve ever embarked on,” Frazer said.

Both Frazer and Astor had experience traveling before coming to Northwestern and said they originally planned the trip as a way to have an adventure before other responsibilities prevented them from doing so.

“There’s going to be a lot of pressure to pick up internships in coming years,” Astor said. “We feel like this maybe is one of the last summers we can do something like this, pretty ridiculous, pretty crazy. ”

Frazer and Astor are also using this trip as a way to raise money and awareness for TECHO, an organization with representation in 19 different Latin American countries. TECHO works to eradicate extreme poverty in Latin American slums by implementing construction projects and other social programs, such as schools and job training.

“What TECHO does is connect with these rural slums that are overlooked by the government, and they raise awareness about their situation and foster community development,” Frazer said. “They don’t just throw money at a situation, they focus on infrastructure.”

Astor and Frazer will be collecting donations through their fundraising page on goennounce.com. They also plan on updating the page throughout their trip to raise awareness about the communities they encounter.

The two originally found TECHO with help from NU Alumni Services. They ultimately chose to support its cause for several reasons, including TECHO’S model for how it serves communities.

“The great thing about it is it’s a very localized charity,” Astor said. “It doesn’t fly people in, it raises local awareness by developing a connection between people who are able to help and people who need help in the same area.”

Juan Camilo Torres, the Director of Community Giving at TECHO, explained the organization serves many different communities in a variety of ways. Torres said one main goal of TECHO is to unite different social classes in the effort to end extreme poverty.

“We bring the college students from Latin America who have all the privilege, and who, in the future, get to be the leaders of the country. And we bring them together with the families who are the most excluded from society,” Torres said. “They work in conjunction to overcome this issue. We bring the volunteers into the slums so they realize that this thing that they’ve grown accustomed to can be overcome.”

“They aren’t just going to be doing this from far away,” Torres said. “They are actually going to be riding through all these communities that are poverty stricken, and they are going to be able to relate to it on a very personal level. And we see that when we break stereotypes with college students and they realize that in the slums are people…that’s when you start seeing social change.”