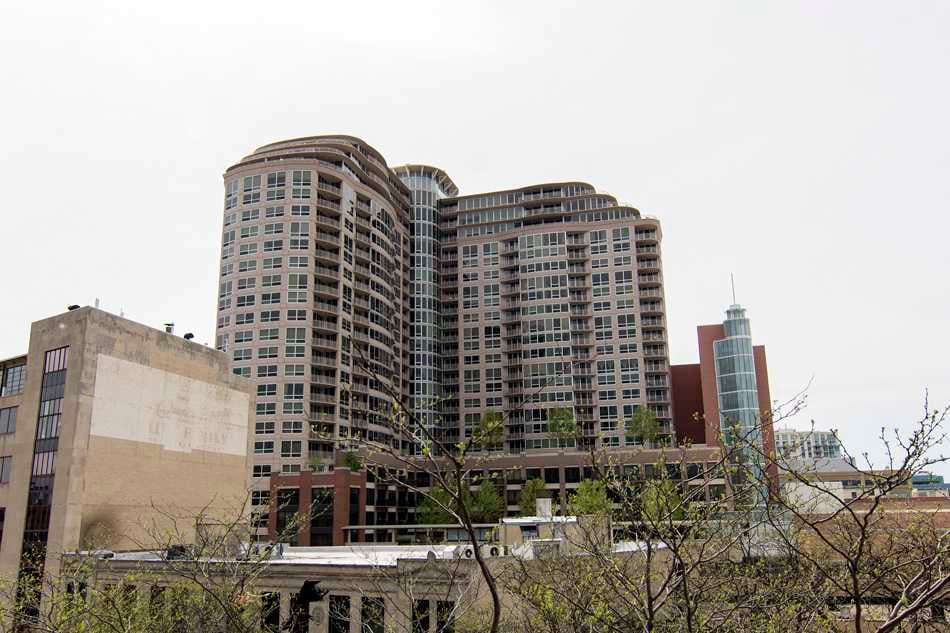 The Sherman Plaza complex is one of the tallest buildings in Evanston. Aldermen voted down a proposal to install a fence around the perimeter of the Sherman Plaza parking garage earlier this week.

Efforts by the city manager’s office to add safety measures to Evanston rooftops have stalled after aldermen voted down a proposal to install a fence around the perimeter of the Sherman Plaza parking garage earlier this week.

The Administration and Public Works Committee voted 4-1 Monday against spending nearly $25,000 to extend a chain-link fence around the perimeter of the roof of the 12-story parking garage at the Sherman Plaza apartments downtown.

In January, the city manager’s office made an initial presentation to the committee on adding safety measures to rooftops in part as a response to recent falling deaths.

However, Ald. Judy Fiske (1st), whose ward contains the garage, said the proposal to add the fence was prompted more by safety concerns about children playing on the roof or sitting on the ledge overlooking the street.

“This isn’t an issue so much about attempted suicides on this location,” said Fiske, who spoke at the Monday meeting although she is not on the Administration and Public Works Committee. “It’s about kids playing up there, sitting on the parapet. … I think this is definitely an accident waiting to happen.”

Former Northwestern student Caleb Dayton jumped to his death from the top of the garage in November. The 22-year-old had taken classes in the School of Continuing Studies earlier that year.

Since Dayton’s death, two other people have committed suicide by jumping from Evanston buildings.

Ald. Coleen Burrus, who voted against the measure, said she didn’t think the fence was necessary.

“I understand that people have taken their own life, which is awful, but I have not heard of any accidental falls from the garage … so I’m not sure there’s a problem,” the 9th Ward alderman said.

Ald. Ann Rainey (8th) said she thought the fence would be ineffective and a waste of money.

“Stupid people cost the city a lot of money all the time,” she said. “They’re a huge problem, and if people are going to sit on the ledge at that garage, if sitting on ledges is their thing, they’re going to find another ledge to sit on.”

City manager Wally Bobkiewicz presented the proposal to aldermen, explaining that he had toured the garage at 807 Davis St. and thought the roof presented a serious safety concern.

“I believe the city is at risk,” he told aldermen at the meeting. “This is because I went up there as the chief executive officer of this organization, saw this condition and felt it was unsafe.”

After the vote, Bobkiewicz told The Daily he does not have plans to pursue the issue further.