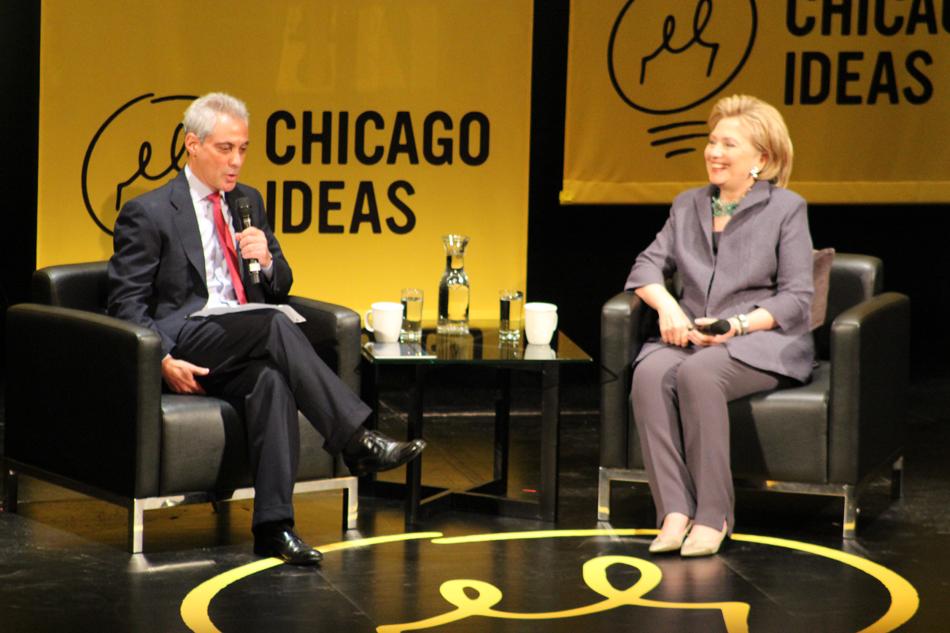 Former Secretary of State Hillary Clinton returned to her hometown of Chicago for the beginning of the national tour of her new memoir, "Hard Choices." Chicago Mayor Rahm Emanuel asked Clinton questions about the book and domestic issues ranging from the economy to education.

CHICAGO – Without ever mentioning the 2016 election, Hillary Clinton gave Chicagoans a glimpse Wednesday of what her presidential campaign might look like if she decides to make another White House bid, when she returned to her hometown for the first public forum on her national book tour.

Mayor Rahm Emanuel (Communication ’85) welcomed the former Secretary of State home and interviewed her during the Chicago Ideas event. Clinton, who was born in the Edgewater neighborhood of Chicago, released her latest memoir “Hard Choices” on Tuesday, where she details her experiences as the nation’s top diplomat.

“I’m very excited to share both what we did and to also go into some of the difficult moments, the hard choices that didn’t turn out well,” Clinton told a full house at the Harris Theater for Music and Dance, 205 E Randolph St., Chicago. “There will be some world leaders who might not be happy when they read my book. And I’m talking to you, Vladimir.”

Although Clinton touched on some of the anecdotes in her new book, she took the opportunity to comment on domestic political issues. When asked about divided government and the rise of anti-establishment groups like the Tea Party, Clinton advised the audience to never vote for anyone who says they don’t make compromises because compromises are necessary in democracies.

She also weighed in on Tuesday’s Virginia primary election upset in which Republican House Majority Leader Eric Cantor lost to a college professor new to politics. She said Cantor lost to a candidate who “ran against immigrants.”

“The answer is to grow our economy and create more jobs,” Clinton countered.

Clinton flaunted her hometown pride throughout the event, talking about her childhood in Park Ridge, Illinois. She called Chicago the center of her family’s world and recalled her father trying to prevent her from leaning out the windows of his Merchandise Mart office by telling her there was a “giant dragon” living in the Chicago River.

Although Clinton addressed difficult issues, running the gamut from education to unemployment to immigration during the Q&A, she kept a sense of humor with the mayor, who had served as President Barack Obama’s chief of staff during her tenure as Secretary of State.

Emanuel and Clinton reminisced beyond the Obama administration back to Bill Clinton’s tenure in the White House, during which Emanuel served as a senior adviser. Hillary Clinton said members of her husband’s staff would say, “Can’t you control your wife, Mr. President?” Emanuel and the audience broke down laughing at the joke, and he went in for a high five with the former first lady but missed and clumsily grazed her hand.

Emily Weiss, a Weinberg senior who attended the event, said she enjoyed the banter between Emanuel and Clinton. She said she purchased a ticket for the talk because she is confident Clinton will run in 2016, and she wanted to see the potential presidential candidate before campaigning kicked off.

Weiss said that as a college student, she connected with Clinton’s comments about education.

“I thought she was gearing up for her campaign,” Weiss said. “I thought what she said about education — about how in the long term that promotes American development and the economy — was really interesting.”

During the event, Clinton also highlighted her work for women’s rights while she served as Secretary of State and she mentioned the work she has been doing at the Clinton Foundation since she stepped down from her last post in public office. She outlined areas where advances need to be made for women, such as in countries where women can’t participate in the economy and in American offices, citing Sheryl Sandberg’s book about workplace equality, “Lean In: Women, Work, and the Will to Lead.”

“Look it up in the dictionary,” Clinton said when she was asked about feminism. “I don’t see anything controversial about that at all.”

Clinton’s candid discussion about feminism and women’s rights comes as a departure from her failed presidential campaign in 2008, when she avoided tying herself to women’s issues.

Despite intense media scrutiny surrounding Clinton’s decision to run for president, neither she nor Emanuel mentioned the possibility of a return to 1600 Pennsylvania Ave. for Clinton. Representatives from “Ready for Hillary,” a “super PAC” formed to support Clinton in 2016, were at the event distributing buttons and holding up posters.

In “Hard Choices,” Clinton alludes to the speculation over whether or not she will run for president, writing “The time for another hard choice will come soon enough.”