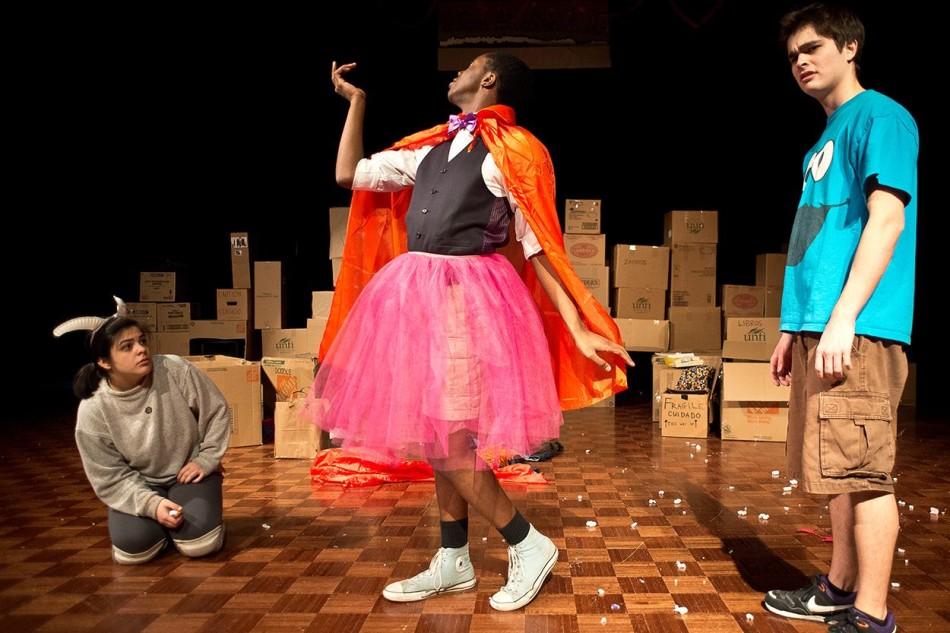 Reno, played by Communication freshman Treyvon Thomas, learns to stand up for himself and his dresses.

An auditorium of fourth and fifth graders leans forward in their seats as a boy twirls on stage in bright pink tutu. This is Reno. He is a character from “The Transition of Doodle Pequeño” by Gabriel Jason Dean, a play for young audiences which touches on immigration, gender non-conformity and bullying. I directed an on campus production of Doodle for Purple Crayon Players and recently we toured the show to local Evanston schools.

The play begins on Halloween in Southern California: our protagonist, the titular Doodle (freshman Weston Jacoby), an eleven year-old boy, has just moved to a quadruplex with his Mamá after his Papá was deported back to Mexico. We meet Doodle’s imaginary trilingual goat, Valencia (freshman Isabella Gerasole), and later Reno (freshman Treyvon Thomas) in his tutu. Together, they face the neighborhood bullies, Marjoram and Toph (freshman Courtney Doyle and sophomore Clayton Shuttleworth), avoid the courtyard troll and his blood pumpkins (Baumgartner, junior Quinn Rattan), and battle the ever-present Santa Ana winds. Doodle is a transformational journey of two boys who put aside their differences to form an unlikely friendship. Recently, one of our scheduled tour performances to a local elementary school was canceled by their administration citing concerns about inappropriate content.

I have spent much of my time here at Northwestern advocating for plays like Doodle, plays which bring a queer narrative to young audiences who desperately need them. During my Sophomore year, I took Professor Rives Collins’ Theatre for Young Audiences class. He assigned us Sarah Gubbins’ play “fml: How Carson McCullers Saved My Life” then playing at Steppenwolf Theatre Company about an out lesbian in her high school. Reading that play I thought, my life would have been incredibly different had this story been presented to me as a teenager. I made myself invisible for years because I was scared. I never learned to stand up for myself because I never learned that it was okay to just be me. As someone who grew up in an incredibly diverse environment the fact that I still had these reservations leads me to believe that there is something profoundly disturbing about how our culture functions. If I had this much trouble, what are young people in the rest of the country dealing with? Through contact with Doodle’s playwright Gabriel Jason Dean, I have learned of his inspiration for the play in his childhood friend Mark, his very own Reno who committed suicide later in his life, unable to escape his demons from years at the hands of homophobic bullies. Mark is one of the many who have suffered from the genocide of homophobic discourse.

I have known for some time that the work I do would not be easy. That people would chase me with pitchforks for corrupting their children. I am not above admitting that my ultimate goals align with changing the mentality of the next generation to create a more equal and less bigoted world. Maybe that is not the noble endeavor I like to believe it is. I never conceived that I would have to face controversy this early on in my career, as an undergraduate no less.

First hearing about the cancelation was a shock, particularly considering the overwhelmingly positive reviews from the on campus production and from the students at our first and third touring locations. I have experienced Evanston to be a progressive school district. I never thought I would have to negotiate conversations with principals about the appropriateness of a joyful play about boys who wear dresses and plays with imaginary goats. At first I was angry. I was angry at the school. I was angry that I had not done more to make sure this did not happen.

Then a profound sadness set in. These administrators have actively kept a room full of students from seeing this story. Because of their actions, students who might have identified with any of these characters suffer. That is what grieves me the most about this situation. This play has an enormous potential to touch lives, but that will not happen if the story is not told. We cannot accomplish the important work this play hopes to do if the story is kept from those who need it.

Whenever I become weary in my fight for this theater — this theater with immense social importance and cultural potential — I think to my younger tomboy self and that great sense of difference I felt when the boys would not include me in their games and that pang of curious recognition when I saw a gay couple walking down the street, hand in hand. I think back to all of the years I spent denying my truth because I could not possibly be gay, could I? All I can hope for in looking toward the future is that I can make a difference, I can help someone get through those hard and confusing years with a contemporary character to identify with, who can help them along and make this personal journey that much less difficult. Young people need all the help they can get to persevere. Many do not make it through. Mark was one of those many.

So what are we waiting for? There are kids out there right now who need us. Where are we to answer their call?

Lindsay Amer was the director for ‘The Transition of Doodle Pequeño.’ She can be reached at [email protected] If you would like to respond publicly to this guest column, send a Letter to the Editor to [email protected]