The Daily Northwestern • May 28, 2014 • https://dailynorthwestern.com/2014/05/28/city/panel-discusses-improved-relationship-between-northwestern-evanston/ 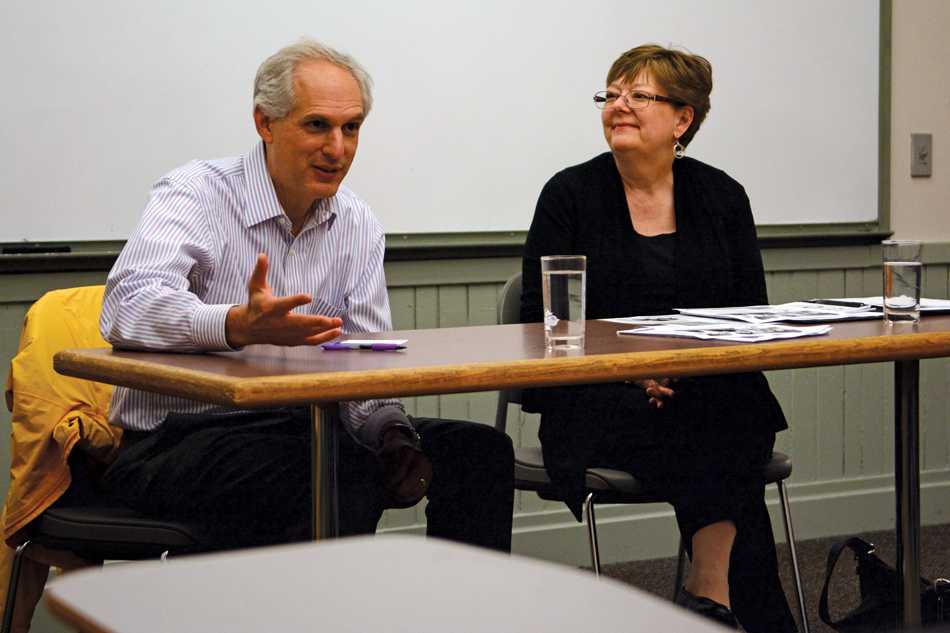 The Roosevelt Institute for Public Policy at Northwestern held a discussion on NU’s relationship with its community and local organizations. Adam Goodman, director of NU’s Center for Leadership, and Barbara Ellson, director of development at Metropolitan Family Services, were the panelists at the event.

The Roosevelt Institute for Public Policy at Northwestern held a panel discussion Wednesday on NU’s relationship to Evanston and other community organizations, which they said has improved significantly over the last few years.

The panelists for the event, “Evanston ‘N’ U,” were Adam Goodman, the director for NU’s Center for Leadership, and Barbara Ellson, the director of development at Metropolitan Family Services, a nonprofit that provides services to families in the Chicagoland area. About 15 people attended the panel, which was held in University Hall.

Ellson, an Evanston resident for more than 20 years, said personality has made a big difference when it comes to town-gown relations between Evanston and NU, specifically mentioning the presence of Morton Schapiro.

“We have leaders who are more willing to work together,” she said. “There’s a much friendlier tone now, the relationship has really improved, and it just feels better.”

Goodman also said he believed the relationship between the university and Evanston was improving.

Goodman distinguished between the university’s relationship with the city government of Evanston and with the general Evanston community.

Last month, Ald. Jane Grover (7th), whose ward includes part of the NU campus, told The Daily she thought the relationship between the city government and the University has gotten better over the years.

“There (used to be) this big purple monster,” she said. “We’re reading from a different playbook now and have graduated from a town-gown relationship to a city-University partnership.”

Both panelists recognized the importance that the University’s tax status plays in its relationship with the city.

On the other hand, Goodman said from a city perspective, NU is occupying land where there could be houses or businesses paying taxes. He was quick to note, however, that the University contributes to the community in other ways such as having its own police department and paying fees for construction.

The two panelists also lauded the abundance of programs NU is creating in order to positively engage with the Evanston community. These programs include the creation of a partnership office between Evanston Township High School and NU, which was founded in 2012.

(New coordinator to promote stronger relations between Evanston and Northwestern)

“We have a responsibility to be present in ETHS,” Goodman said.

Some of the other ways in which NU benefits the local community is by funding local nonprofits like Metropolitan Family Services, Ellson added.

Goodman also addressed the role which individual students can have in these nonprofits and other volunteer opportunities. He said sometimes students can approach things with the best intentions and still have a negative result if they are not careful.

“It’s easy for you and me to say, ‘Of course, we have a lot to offer, let’s go out into the community and do good,'” he said. “We need to assess this rather than walk in and say, ‘I’m here to help, I’m going to do these five things.’ The challenge is that it takes time to learn about the community, but you’ll find it much more rewarding for you (when you do so) versus ‘I need to do this because it’s good to be a good citizen.”