The Daily Northwestern • May 27, 2014 • https://dailynorthwestern.com/2014/05/27/sports/softball-after-five-years-emily-allard-sprints-off-to-the-pros/

Softball: After five years, Emily Allard sprints off to the pros 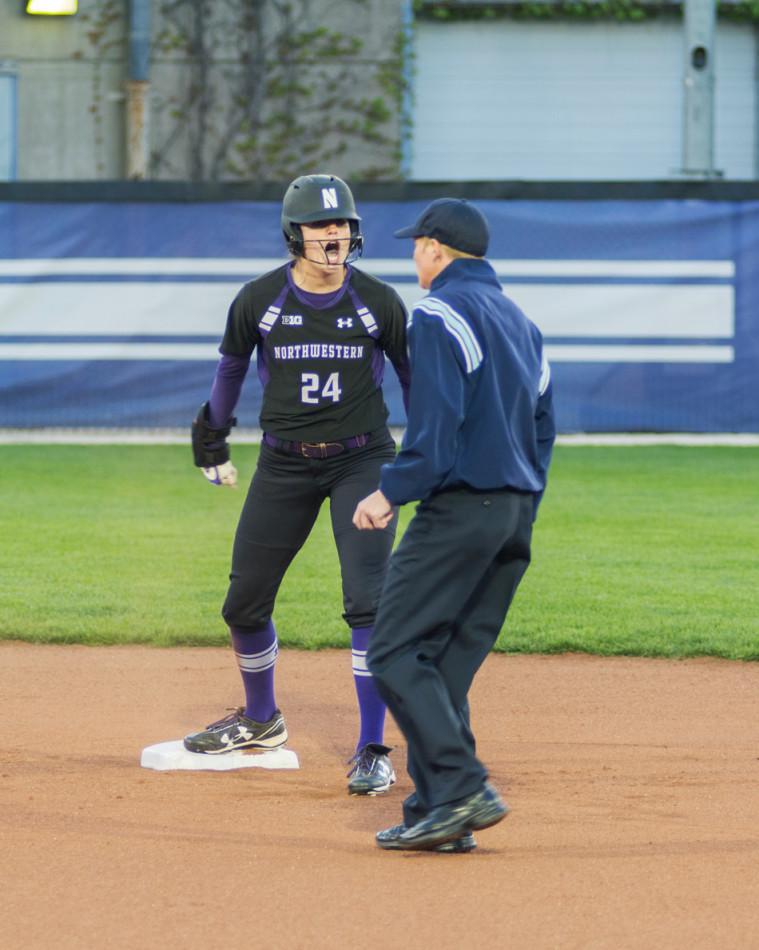 Not a catcher’s futile throw to second base. Not a pitcher’s hardest fastball. Not even a centerfielder playing on the dirt to cover second base, as Wisconsin once tried.

Allard’s aggressiveness made her Northwestern’s all-time leader in stolen bases with 154. Every time she stood on first base, she would stare down coach Kate Drohan waiting for the sign, which slowly changed from a full-blown hand motion to a quick tilt of the head. She ended her career having converted on almost 93 percent of her stolen-base attempts.

The Big Ten could not slow her down on the base paths, but her own coach found a way to tame her – practice. Allard, a former Daily columnist, recalls a conversation she had with Drohan during her freshman year about why Allard does not practice like she plays. The outfielder says she finds an extra level on game day.

“It’s just not the same,” Allard said. “The stakes aren’t as high. (Kate and I) talked over the years about how, for me, we could make practice game-like, and then it got the point toward the end of my career where it was just a joke.”

Even though practice slows Allard down, it didn’t halt her career like the injury she suffered before the 2013 season that cost her her true senior season. Despite trying to tough it out, Allard elected to seek a medical hardship waiver last season after six games in order to come back fully healthy for the 2014 season.

“It was emotionally draining,” Allard said. “To play every game of my career and then know the opportunity for me to step on the field was taken away — that was hard to deal with.

“It got to the point where it wasn’t going to change … and from there I had to adjust. It took me a while, and I don’t know if I ever fully got there.”

Allard had committed to Northwestern and was playing in a high school tournament when she met her best friend.

She was in the on-deck circle preparing for a game when a random girl ran up to her and introduced herself. That random girl was Kristin Jensen, who had also committed to NU at the time.

“I honestly don’t know what came over me, but I just walked up to her and said, ‘Hi, I’m Kristin Scharkey, we’re both going to Northwestern next year and we’re going to be best friends,’” said Jensen, who recently married former NU wide receiver Mike Jensen. “I really don’t know why that came out of my mouth, but it did. We hugged and the rest is history.”

“I was thinking, ‘Oh my God, who is this girl?’” Allard said of the encounter. “Her smile was so big, and what she said was so enthusiastic. And there was not a doubt in her mind that her and I would be best friends.”

The two have shared many special moments since that day, but one sticks out in Jensen’s mind that showcases the type of friend and teammate Allard is.

Jensen had broken her wrist during a play at first base during the first game of the 2012 regional final in Austin, Texas, and Allard would not allow her friend to miss the winner-take-all final game. Allard and Jensen spent the 30 minutes between games throwing the ball, even though Jensen’s throws were going barely more than five feet.

“It’s so representative of who she is as a player, as a person and a teammate because Emily Allard cares more about the win column than the stat line,” Jensen said. “That is what drives her and what makes her such a special teammate for me.”

However, the most difficult day the two shared may have been April 28, 2013, senior day for Allard’s classmates. She asked Drohan if she could be the one handing out the flowers to each of her teammates that day. Jensen was one of those seniors and said it was bittersweet for her to receive her flowers from Allard.

“I gave Kate a hug, looked up and saw Emily walking toward me with my flowers,” Jensen said. “That was hard. We gave each other the longest hug, me on one side of the first baseline, her on the other, when we had been on the same side for three years.”

Allard used the 2013 season to absorb as much as she could from the coaches before she returned to the field in 2014.

Ironically, Allard said she learned from associate head coach Caryl Drohan how to make the game seem slower to her than it did.

“One of the things that Caryl told me during my career is there’s a couple people where the game comes slow to them, and she told me I was one of those people,” Allard said. “I really tried to take that even further and see how much I could slow it down.”

The tips seemingly worked in 2014. Allard led the team with a .394 batting average and 52 runs scored. She added 37 stolen bases to her total to break the record and then distance herself from second place.

Kate Drohan said she loves to coach Allard because she is one of those players who thrives in the pressure moments and rises to the occasion.

“The better the pitcher is, the better she is,” Drohan said. “When you have someone with her kind of athleticism and that kind of drive who steps up in those types of situations, that’s a lot of fun to coach.”

Allard stepped to the plate in the fifth inning of the regional final against No. 12 seed Washington with the Huskies leading 9-0 and knew it would be her final at-bat. She calmly willed herself to hit a single and promptly stole second, a fitting end to her career.

However, her emotions failed to catch up to her realization that her time at NU was over. After shaking hands with Washington, she was able to suppress her tears. When Kate Drohan said she wanted to eat as a team after the game, Allard started to cry. But when Allard was packing her sweaty socks in the mesh laundry bag back in her Seattle-area hotel room, she lost it.

“I started sobbing alone in an empty hotel room, packing up my travel bag for the last time,” Allard said. “Everything Northwestern meant to me came crashing down through my eyeballs. I’m still sad about it. I will never get another game back in a purple uniform, and that really bothers me.”

Allard is still trying to convince herself that every senior feels the way she does now that her collegiate career is over. However, she does have one thing to look forward to – her new career with the Chicago Bandits of National Pro Fastpitch.

No matter how long her career with the Bandits lasts, she said she will always be grateful to NU and all it has given her. She said she leaves with no regrets even though she wished the Cats could have accomplished more as a team.