The Daily Northwestern • May 23, 2014 • https://dailynorthwestern.com/2014/05/23/sports/lacrosse-northwestern-outclassed-by-maryland-in-ncaa-semifinal/ 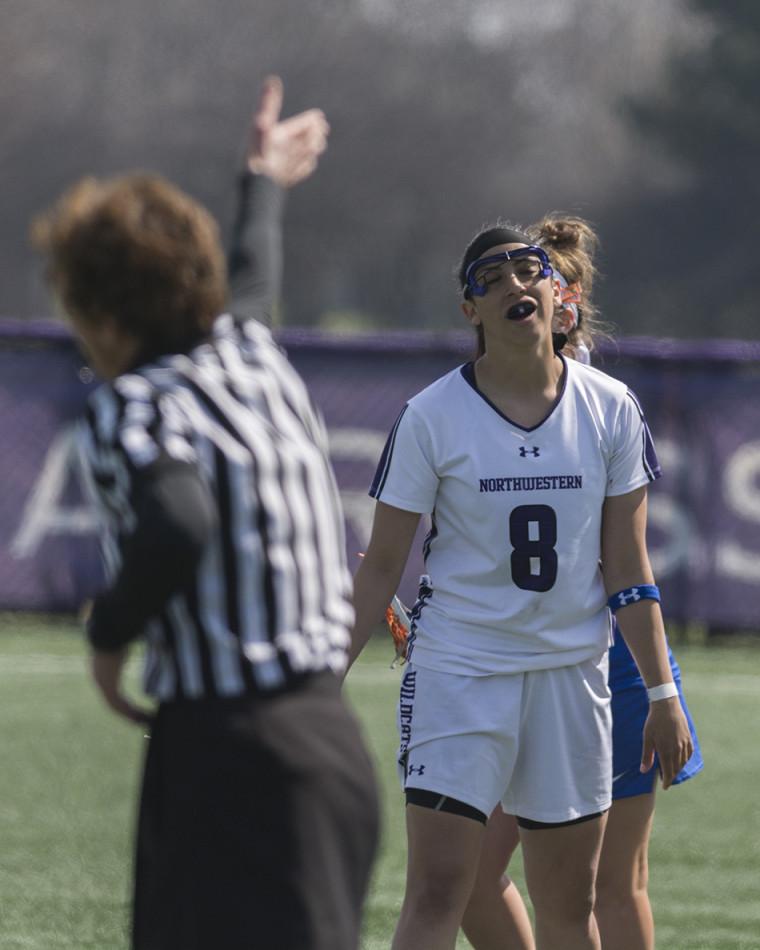 Junior Kara Mupo and the Wildcats fell short of an eighth national championship, falling to Maryland 9-6 Friday in the NCAA Tournament semifinals. Two days later, the Terrapins defeated Syracuse 15-12 to claim the title.

TOWSON, Md. — Northwestern coach Kelly Amonte Hiller was wrong when she said her team could play with anybody in the country.

After a season with more losses than the Wildcats (14-7) have clocked since 2003, Maryland (22-1) cut short NU’s dreams of an eighth national title short Friday evening at Johnny Unitas Stadium at Towson University, beating the Cats 9-6.

The only Final Four team NU had not played before Friday’s semifinal, Maryland outplayed NU top to bottom Friday night, especially after the Terrapins started beating senior draw control specialist Alyssa Leonard on the circle in the second half.

Easily the most important statistic of the semifinal matchup, the Terrapins ultimately bested the Wildcats 10-7 on the draw after the first half ended with each team winning four.

Maryland’s offensive leader Taylor Cummings, who led her team with four draws on the evening, said she didn’t try to win the ball to herself against Leonard but rather send the ball to her circle players to create a ground ball situation.

“A lot of the balls kind of went to the outside of the circle and neither of us were really getting our sets to go straight up,” the senior said. “Then it was just a scramble on the ground.”

Maryland also presented a fierce offensive attack, outshooting NU 24-17 with powerful attempts. The Terps seemingly had no trouble finding gaps in NU’s defense within the eight-meter, often holding onto the ball deep into the Cats’ zone.

NU’s defense did manage to hold Maryland to its second-lowest scoring game of the year, thanks in large part to senior defender and go-to face guarder Kerri Harrington marking Cummings.

The senior kept Cummings, who has 60 goals on the season, to a single score Friday.

Still, Maryland had a tighter group of offensive leaders who operated with a clearly defined system. Only junior attack Kara Mupo had more than one goal for NU, while Maryland had two players with two and one with a hat trick.

The Terps also had five assists on their 9 goals compared to the Cats’ two on 6.

Ultimately Maryland was more poised than NU throughout the game. That opportunism first showed in the first half, when the Terps started building their lead off the man-up situation that came when senior attack Christy Turner was assessed a yellow card with just over two minutes left in the half.

“In the first half, we had some chances and we just didn’t capitalize on them,” Amonte Hiller said. “You have to do that in these types of games, it’s a game of inches … you know, you have two really good teams out there and you have to capitalize on the opportunities you have and we didn’t.”

Maryland started the second half with a 3-goal lead, and though the two teams both scored 4 times in the second half, the Terps’ defense forced the Cats to spread out their goals so much that the tallies proved to be too little, too late.

The Cats first and second goals of the half were more than 15 minutes apart, and the Terps’ defense held NU shotless for long stretches several times.

After a four-year stretch where they won two national championships — including one over Maryland — NU’s seniors went out Friday with a loss.

Despite the unusually challenging season — and a disappointing conclusion, Amonte Hiller credited her seniors for representing the program’s winning culture.

But among the symbolism and intense emotion displayed Friday both during and after the matchup, Amonte Hiller summed up the semifinal concisely.

“Credit goes to Maryland,” she said. “They played a great game.”