The Daily Northwestern • May 22, 2014 • https://dailynorthwestern.com/2014/05/22/sports/lacrosse-northwestern-faces-maryland-in-landmark-ncaa-semifinal/ 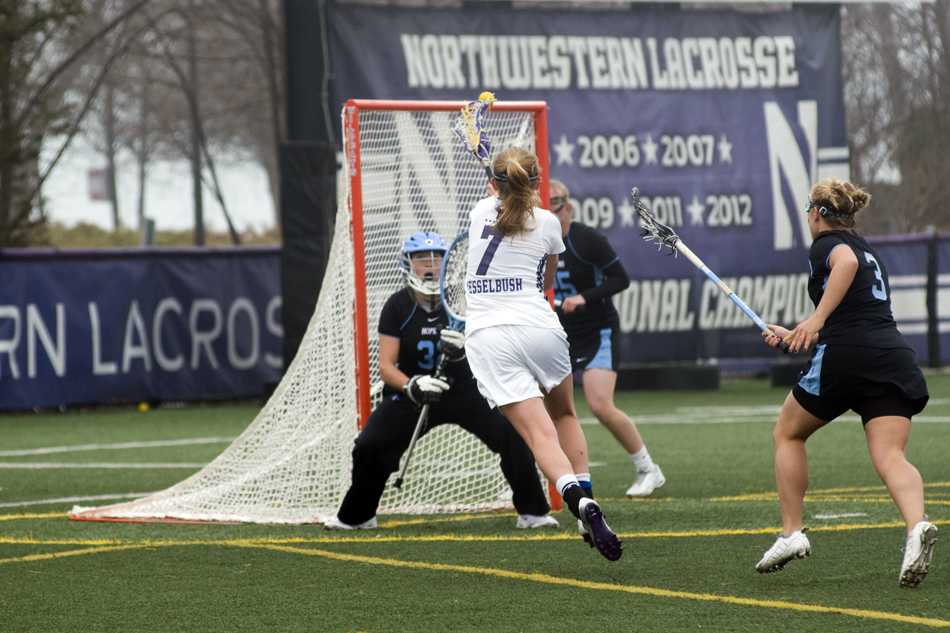 Northwestern’s offensive attack will have to be on top of its game against Maryland on Friday. The Wildcats average 11.05 goals a game this season, well below the Terrapins’ average of 14.82.

In many ways, this year’s NCAA Final Four is same old, same old.

Virginia hasn’t made it to the Final Four since 2007, when the Cavaliers lost in the championship game to the Wildcats. That win against Virginia was the third in what would become a streak of five consecutive NCAA championship titles for NU.

Still, this year is special.

This is the last year coach Kelly Amonte Hiller and her team will represent the American Lacrosse Conference. The Cats are the lone non-ACC team in the Final Four.

It is also the last year before Maryland leaves the ACC, the sport’s traditional powerhouse conference, to join the Big Ten conference and shift the landscape of college lacrosse.

So no matter how much all four coaches dismiss the landmark weekend as secondary to their teams’ focus, this Final Four is a watershed moment for college lacrosse. Amonte Hiller hopes to both honor the ALC and kick off the new Big Ten with a win.

“To be representing the ALC in its last year, obviously we want to bring pride to that and could not be more excited about the Big Ten next year,” said Amonte Hiller, who played both soccer and lacrosse for Maryland. “We’re excited about that and hope that we can show a great game.”

NU’s matchup with Maryland will be a display of the best in the sport, starting with the opening draw.

Senior draw control specialist Alyssa Leonard clocks in at third in the nation for draw controls, with 160 on the season, an average of eight per game. Maryland’s Taylor Cummings is 11th in the country, with 116 on the season, averaging 5.27 a contest, but the Terps’ midfielder is not a player to disregard.

The sophomore anchors Maryland’s midfield and leads the team with 59 goals, one of three Terps players with more than 57 goals this year. The fourth-highest scorer on the team has 47 goals to her name.

Leonard leads NU with 40 goals and the next two leading scorers, junior attack Kara Mupo and senior attack Kat DeRonda, check in with 38 and 35, respectively.

Offense is perhaps the biggest difference in terms of playing style. The Terps play a high-powered offense, averaging 14.82 goals per game to the Cats’ 11.05.

To keep Maryland at bay and be able to play its slower, more deliberate style of offense, Amonte Hiller said her team will rely on its entire back line.

“It obviously poses a big challenge,” Amonte Hiller said. “You can’t really focus in on one person too much. … They not only have four threats, their threats can do multiple things. We’re just going to have to play great team defense.”

Although the Cats and Terps usually do not play each other during the regular season, Amonte Hiller said she’s kept up with Maryland’s game. The coach said NU will be balancing “focusing on themselves” in practice, a usual Amonte Hiller catchphrase, with studying up on the Terps.

Maryland is the only Final Four team NU has not yet played this year. The Cats bested Virginia 13-12 and fell to Syracuse 11-7.

“To have someone new to play and to have it be the number one team in the country, obviously that’s exciting for our players,” Amonte Hiller said. “Going into it with just an incredible amount of respect for Maryland, having played there and everything … we’re really excited.”

Leonard voiced a more competitive opinion when asked about the team’s position as underdogs after an unusually up-and-down season.

“Having a five or six seed in the tournament is what this is all about,” the senior said. “A lot of people have doubt in us, people doubted us in that Florida game. … We’re ready to prove some people wrong.”