The Daily Northwestern • May 21, 2014 • https://dailynorthwestern.com/2014/05/21/city/panel-addresses-concerns-with-racial-disparities-related-to-drug-sentencing/ 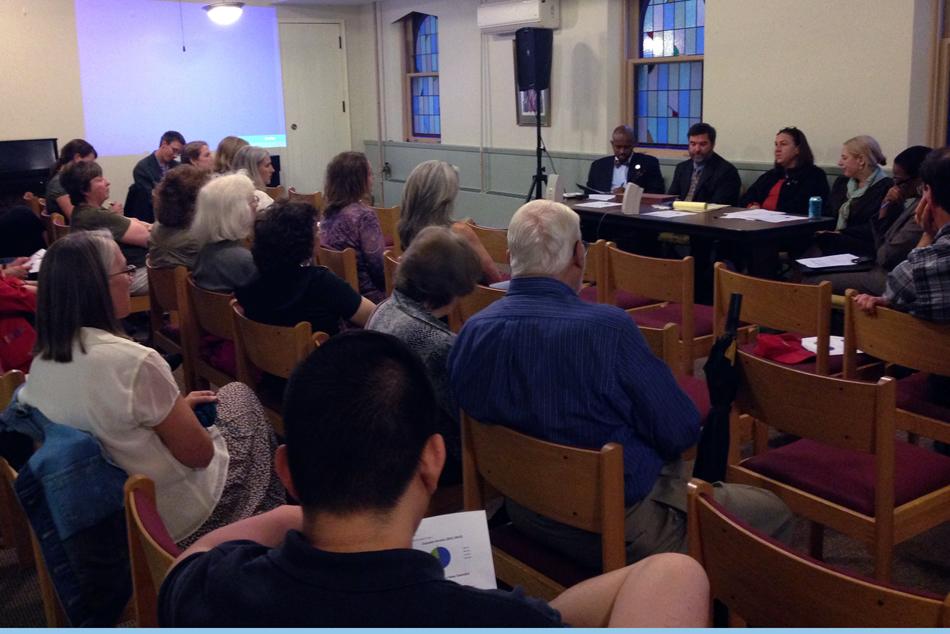 Four panelists address an audience Tuesday night at a Democratic Party of Evanston panel on drug sentencing. Speakers discussed not only their personal intimacy with the drug sentencing and incarceration situations, but also the racial disparity existing in Evanston arrests and tickets.

A panel hosted by the Democratic Party of Evanston on Tuesday discussed problems with punishments for drug possession in light of racial disparities in arrests and citations in Evanston.

“Our goal is to get the conversation going in Evanston,” said Cynthia Cornelius, an Equal Justice Works fellow, who led the discussion.

The event, “Drug Sentencing: Is It Time For Change?,” addressed an audience of about 30 people at St. Paul’s Lutheran Church, 1004 Greenwood St. with panelists from a variety of backgrounds: Kathie Kane-Willis, the director of Illinois Consortium on Drug Policy at Roosevelt University; Susan Trieschmann, the owner of Evanston’s Curt’s Cafe; Dan Coyne, a law professor at the Illinois Institute of Technology, and Evanston Police Department Officer Loyce Spells.

Coyne talked briefly about how people of color were more likely to be arrested for drug possession.

A handout Kane-Willis created and distributed at the event broke down incidents of arrests and ticketing in Evanston by race. Between 2008 and 2011, black Americans made up the largest racial group arrested in Evanston at 66 percent. Those numbers grew 5 percent, between 2011 and 2012, when 71 percent of Evanston arrests were of black Americans.

Similarly, black Americans made up the largest ticketed population in Evanston from 2011 to 2012, representing 61 percent of those ticketed, the handout said.

Coyne said the sites of arrests tend to be clustered in certain areas of the city.

Spells, who grew up in Chicago, said arrests were common in the area where he lived and were so frequent that prison sentences often resulted in a “family reunion” of sorts, as cousins, brothers and others were likely also incarcerated.

Spells, who works on the Problem Solving Team at EPD, said the problem of incarceration should be addressed at its roots, especially the risk factors that lead to drug selling in the first place.

Kane-Willis, a former heroin user, said she knew from experience that there were a lot of misconceptions concerning drug use and drugs in general. People tended to categorize drugs based on whether they were stigmatized or not.

She asked audience members how many of them used caffeine, chocolate or alcohol, yet no stigma was associated with any of those. Everyone uses drugs, and not everyone misuses them, she said.

Before the discussion on race, a few other items concerning drug sentencing were discussed. Coyne talked about the frustration people have with felony convictions and how they tend to mark the relations people have even after the fact.

Before adjourning, Cornelius asked Trieschmann to share her thoughts on the situation, after the other panelists mainly dominated the discussion. Trieschmann said she was not all that familiar on drug sentencing policy, but the work she was doing already with youth of the community is where the focus should be.

If residents were unable to reach legislators to bring about the change they wanted, she said that was fine as long as the community itself was making an effort.

The discussion concluded with Cornelius asking attendees if they were at a consensus about whether or not it was time for a change. A number of attendees voiced agreement and nodded their heads.