The Daily Northwestern • May 21, 2014 • https://dailynorthwestern.com/2014/05/21/city/evanston-to-draft-a-proposal-to-help-prevent-falling-deaths-city-manager-says/ 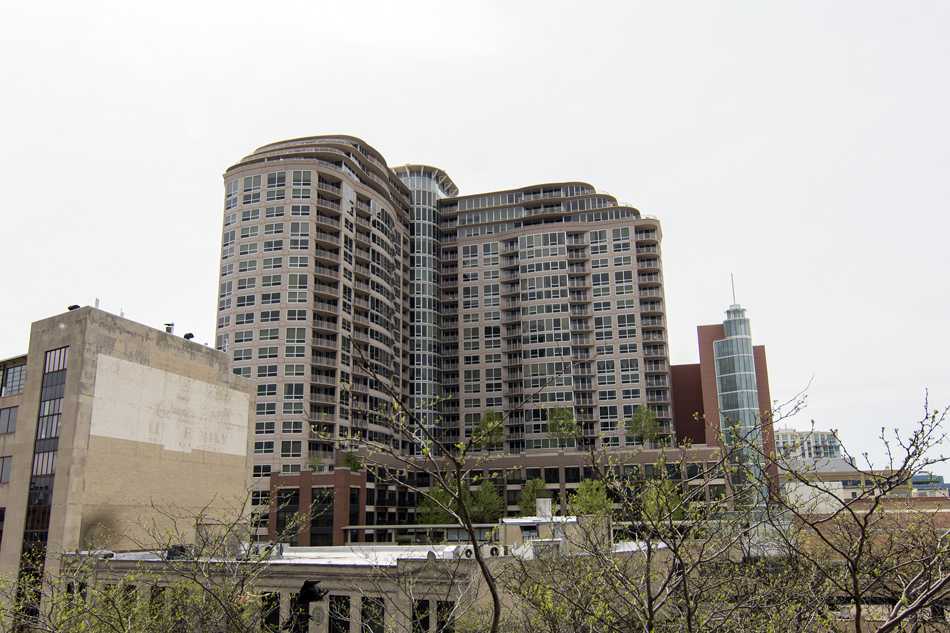 The Sherman Plaza complex is one of the tallest buildings in Evanston. Changes to Sherman Plaza and other buildings have been proposed in the wake of several recent suicides.

After three incidents in the past six months in which people died after falling from Evanston buildings, city officials are looking into ways to make rooftops safer.

Officials are focusing on the Sherman Plaza apartments at 807 Davis St., where former Northwestern student Caleb Dayton jumped to his death in November. Officials plan to draft a proposal to install a fence around the rooftop parking lot and bring it before City Council this summer, city manager Wally Bobkiewicz said.

“There remains concern, specifically among the tenants at Sherman Plaza, about the structure there,” Bobkiewicz told The Daily on Friday. “We’re coming up with a new proposal that we think will address some of the issues.”

The parking lot currently has a short cement barrier. City officials intend to present a plan to Council in July asking for funds to install a chain-link fence around the entire perimeter of the lot, Bobkiewicz said.

Dayton, 22, jumped from the top of the 12-story garage on November 12. He had taken classes in the School of Continuing Studies earlier that year.

Since Dayton’s death, two other people have jumped to their deaths from other Evanston buildings. Ten days after Dayton’s suicide, a 22-year-old woman died as a result of jumping from the parking garage at 1800 Maple Ave. Last week, a 32-year-old man jumped to his death from the Optima Views condominium complex at 1720 Maple Ave.

Neither the 22-year-old woman nor the 32-year-old man had ties to NU.

The possibility of adding fencing or netting to buildings to make it more difficult for individuals to jump from them received a mostly negative reaction in January from aldermen on the Administration and Public Works Committee.

At the meeting, assistant city manager Marty Lyons presented a research memo looking into possible solutions to the problem of people jumping from buildings. Most communities that had tried to address the issue did so with fencing or netting, he said.

At the January meeting, Alds. Ann Rainey and Delores Holmes said they opposed installing fencing or netting on buildings. Rainey said she thought both options would be too expensive. Ald. Jane Grover (7th) questioned whether changes to infrastructure would be the most effective option.

“I don’t know if the parking garages present the largest risk for us,” Grover said at the January meeting. “I’m interested — we all are — in preventing people from injuring themselves.”

Aldermen at the meeting suggested it might be more effective to focus on mental health initiatives to prevent suicide, as opposed to physical changes to buildings. Rainey said the committee needed more data on suicides in order to decide whether any action needed to be taken.

If aldermen approve the funds to install a fence around the Sherman Plaza parking lot, Bobkiewicz said city officials will look into installing fences on other buildings. He said the garage on Maple Avenue would probably be the next building they would address.

“There really is no one solution that seems to have worked in other communities,” Bobkiewicz said. “Ultimately, if an individual wants to do harm to themselves, they’re going to climb over whatever they need to climb over.”