The Daily Northwestern • May 21, 2014 • https://dailynorthwestern.com/2014/05/21/campus/conservative-commentator-ben-shapiro-discusses-political-debate-tactics/ 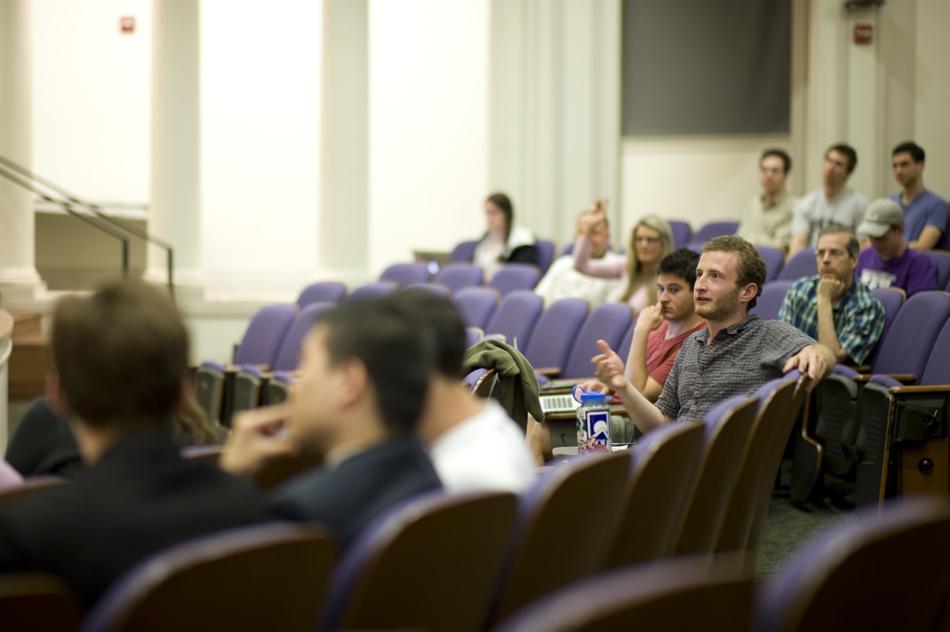 A member of the audience asks a question during a talk given by Ben Shapiro at Harris Hall on Wednesday night. Shapiro, brought to campus as the College Republicans’ spring speaker, spoke on the silencing of conservative opinion in modern media.

The lecture, titled “Intimidation: Partisan Politics in 21st Century Society,” was based on Shapiro’s most recent book, “Bullies: How the Left’s Culture of Fear and Intimidation Silences America.”

About 50 people attended the event, which was held in Harris Hall.

“We were looking to bring a speaker who could discuss the lack of diversity of opinion on college campuses,” said Daniel Villalon, NUCR’s spokesman.

The Weinberg sophomore said he was concerned that conservative ideas are not given a sufficient platform for discussion at NU.

“A lot of our previous speakers have raised opinions that are not commonly heard on campus,” Villalon said. “We do a good job of making sure those opinions are heard.”

Shapiro, who is currently editor-at-large of Breitbart.com and runs a legal consulting firm in Los Angeles, criticized the debate tactics used by the political left and presented a strategy for the right to use against them.

“We live in an era, unfortunately, of partisan politics in which each side demonizes the other,” Shapiro said. “It’s how the left wins in America, by avoiding discussion and attacking the character of their opponents.”

“If you win a debate simply by ascribing motives to somebody that they don’t have, that’s a morally inferior thing,” he said.

In a ten-step strategy to defeat an opponent in a debate, Shapiro laid out tactics including “hit first,” “frame your argument” and “force the opponent to defend their position.” Shapiro cited President Barack Obama’s 2008 campaign strategy of framing his argument with the slogans “hope” and “change,” as evidence of effective use of these tactics.

Shapiro suggested that the best way to defeat the debate tactics of the left is “mutually assured destruction.”

Medill senior Jordan Minor, who identifies as a Democrat, said he came to the event to listen to a different perspective.

“Shapiro’s politics are completely counter to mine, but I like to see people like that to understand where they’re coming from and get a better sense of my own politics,” he said.

In the Q-and-A session following the presentation, the conversation turned to Shapiro’s critique of the left’s tendency to tell the people on the right to “check their privilege,” referring to the idea that social and economic privileges inhibit the right from understanding minority perspectives.

“I disagree on a fundamental level that an argument is more or less valid based on the person making it,” Shapiro said. “If that’s true, then we’d have to polarize the political debate to the point where only women are voting on contraception and only soldiers are deciding foreign policy.”

Shapiro, who grew up in a Jewish family, rejected the idea that lack of privilege should stop people from going after what they want. He spoke of his grandparents who worked to overcome discrimination against Jews in their time.

“If the system is not fair to you in America, work harder,” Shapiro said. “If you want to change the world, get out and do something instead of just sitting and musing about social justice.”