The Daily Northwestern • May 20, 2014 • https://dailynorthwestern.com/2014/05/20/campus/radical-activist-angela-davis-draws-large-crowd-with-social-justice-talk/ 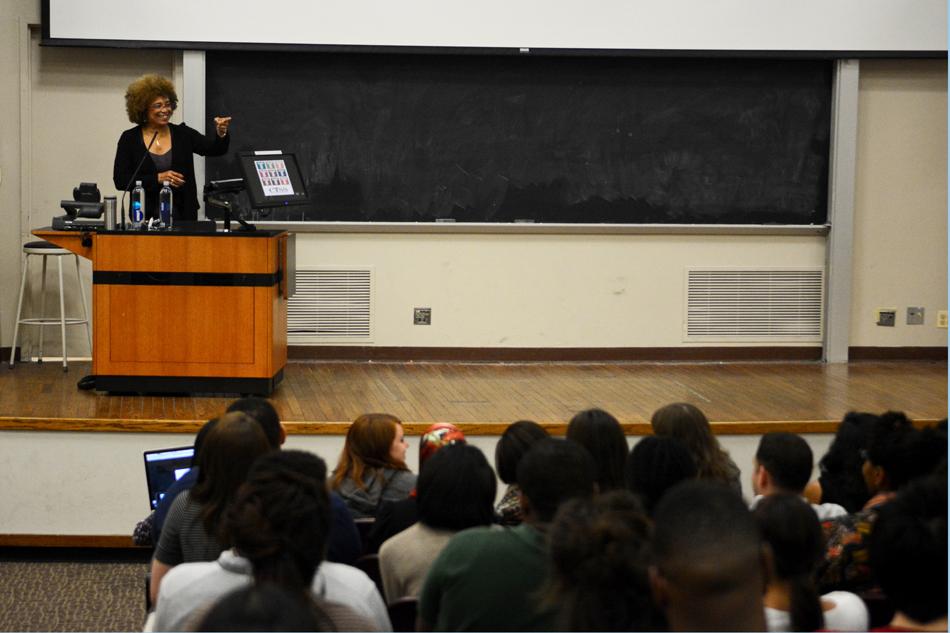 Angela Davis interacts with audience members during her talk at Fisk Hall Monday night. Davis discussed a variety of topics during the presentation, including her work in the anti-prison movement.

Activist and scholar Angela Davis gave a wide-ranging talk Monday about abolition of the prison-industrial complex, feminism, intersectionality and a host of other political and social justice issues as part of the Northwestern University Contemporary Thought Speaker Series.

Davis spoke before a full house in Fisk Hall and received an enthusiastic response and a standing ovation. She spoke on the theme of “radical thought in action,” and talked about what feminism and abolition have to offer each other.

Davis was associated with the Black Panthers and the Communist Party during the Civil Rights Movement, and earned a radical reputation when she appeared on the FBI’s “Ten Most Wanted” list for being involved in a solidarity campaign for three prisoners. She is the author of several books and the founder of Critical Resistance, an organization working for the abolition of the prison-industrial complex.

Throughout the talk, Davis emphasized the importance of intersectionality between different social justice issues, such as prison abolition and immigrant rights. She further encouraged people to question racism and other injustices implicit in societal structures such as prisons, calling them “the underbelly of democracy.”

“Often what we do is we simply target the embarrassing individuals, the Donald Sterlings of this world,” she said. “Without looking deeply into these structures, we will never purge our world of this systemic racism.”

Davis also talked about her pro-Palestine stance and the deployment of anti-Muslim sentiment in the Israel-Palestine conflict.

“I think that when we look at Palestine, we are compelled to acknowledge that modes of racism, apartheid for example, which we assume were abolished with the end of South African apartheid, have not been deposited into the dustbin of history,” she said.

Weinberg senior Tori Zuzelo, a member of the CTSS leadership, said the series grew out of students’ desire for broadly appealing, intellectual speakers on campus.

“The speaker series started three years ago, and it came out of the UBPC, which is the Undergraduate Budget Priorities Committee,” she said. “They found that there was a general lack of intellectual speakers on campus, or so students thought – like a generally big one, not one brought by a specific group, just speaker that appealed to many students.”

After the speech, Davis answered a variety of questions from students, including how to interact and have conversations with friends with clashing political views and how academic institutions can fill gaps in education on underrepresented groups in history.

Davis also called on students to think about social justice issues implication in their own lives, mentioning NU and Evanston’s ties to the 1864 Sand Creek Massacre, a slaughter of more than 100 Cheyenne and Arapaho people in Colorado while NU founder John Evans was the governor.

“I end hoping that you will continue this exploration, and that you will find new ways of sharing ideas and producing communities that unite us in a new and ongoing quest for freedom,” she said.

Medill freshman Carson Brown said she grew up hearing about Davis’ accomplishments as a radical thinker and was excited to hear her speak.

“When she came here, I really appreciated that she took everything that we know about her history and made it contemporary and brought in conflicts that are going on right now,” she said. “She brought in the Israeli-Palestinian conflict and I thought that was powerful and poignant. I love that she encouraged critical thinking and not taking things at face value.”