The Daily Northwestern • May 19, 2014 • https://dailynorthwestern.com/2014/05/19/campus/lgbt-resource-center-celebrates-10th-anniversary-at-northwestern/ 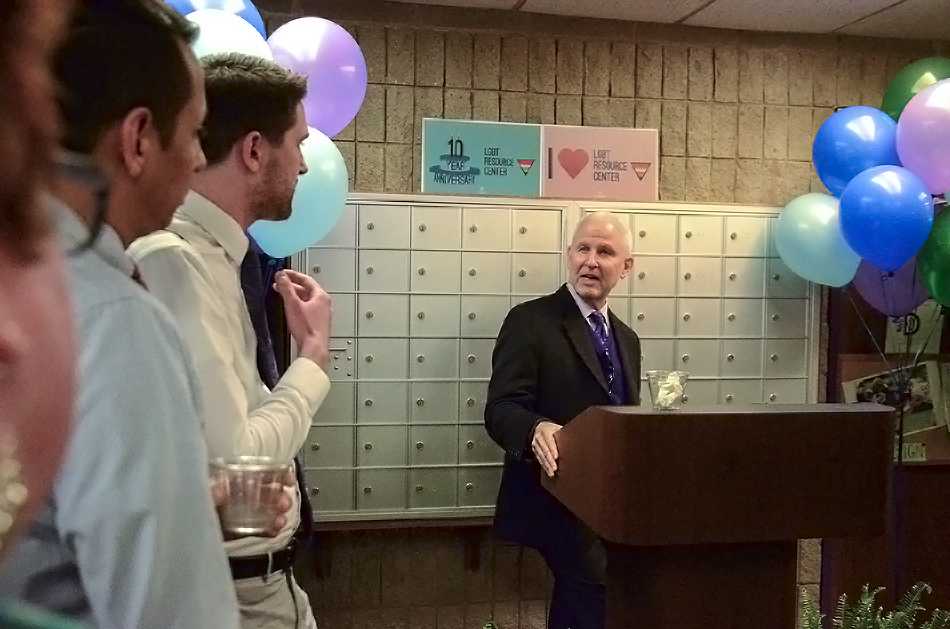 University President Morton Schapiro speaks at a ceremony at the LGBT Resource Center Monday afternoon. The ceremony, held to commemorate the 10th anniversary of the opening of the center, featured remarks from University President Morton Schapiro, from Patricia Telles-Irvin, vice president of student affairs, and from Devin Moss, director of the LGBT Resource Center.

For University President Morton Schapiro, the changes in the world over the past 11 years have been mostly negative. From political turmoil to environmental troubles to rising economic inequality, Schapiro said his generation “has screwed everything up.”

But he has seen one area where society has greatly improved.

“The one thing that has gone better is in LGBT issues, and I think maybe the reason why people weren’t that optimistic 11 years ago that we could make progress in these important regards is that, you know, sexuality was sort of the one thing left where you could sort of mock it and openly have disdain for it,” Schapiro said Monday.

Schapiro spoke about the positives of LGBT rights at a celebration of the 10th anniversary of the LGBT Resource Center on Monday in Norris University Center.

Devin Moss, director of the Resource Center, said the event brought administrators, faculty, students and alumni together to highlight the growth of the center.

Dan Diem (Kellogg ’87), a board member of the Northwestern University Gay and Lesbian Alumni, announced a $10,000 donation to the Resource Center from Michael Leppen (SESP ’87).

“It was great to hear all the historical stories, but also great to hear the gift made by the alumni group,” Moss said. “I think we are definitely on the right path to doing things right and doing great things here at Northwestern.”

Diem said the gift commemorates the anniversary but will also propel the center into the future.

“When I was here, there wasn’t anything like that,” he said. “To be able to see something that has taken off just within 10 years, here to be the support of all the students. We are really in a position now to involve all the allies and the allies are really the focus of the next 10 years.”

Moss also announced a new service-learning social justice program, the Stonewall Society, being developed by his office. The program is a partnership between the Resource Center and Chicago House, which works with HIV positive or gender nonconforming individuals in Chicago, and Moss hopes it will launch in the fall.

Patricia Telles-Irvin, vice president for student affairs, said the University is also looking into expanding the Resource Center’s space this summer. She said the center has continued to make progress in improving the inclusivity of NU’s campus.

“I do want to emphasize the fact that we are here to educate, no question about that, not only our students, but also faculty and staff, because we want to continue to make this campus a very inclusive one, and certainly for LGBT students,” she said. “One of the things that I love about this University is that we do try to do everything possible to make this campus an inclusive one.”

“I know that as a queer student here at Northwestern, having the opportunity to network with other queer students here and to just socially interact with other LGBTQ+ students has been transformative for me and has been hugely helpful in helping so many students come to terms with their identities and just experience what it’s like to be a part of a queer space,” the Communication junior said.