The Daily Northwestern • May 18, 2014 • https://dailynorthwestern.com/2014/05/18/sports/softball-northwesterns-season-ends-in-ncaa-regional-championship/ 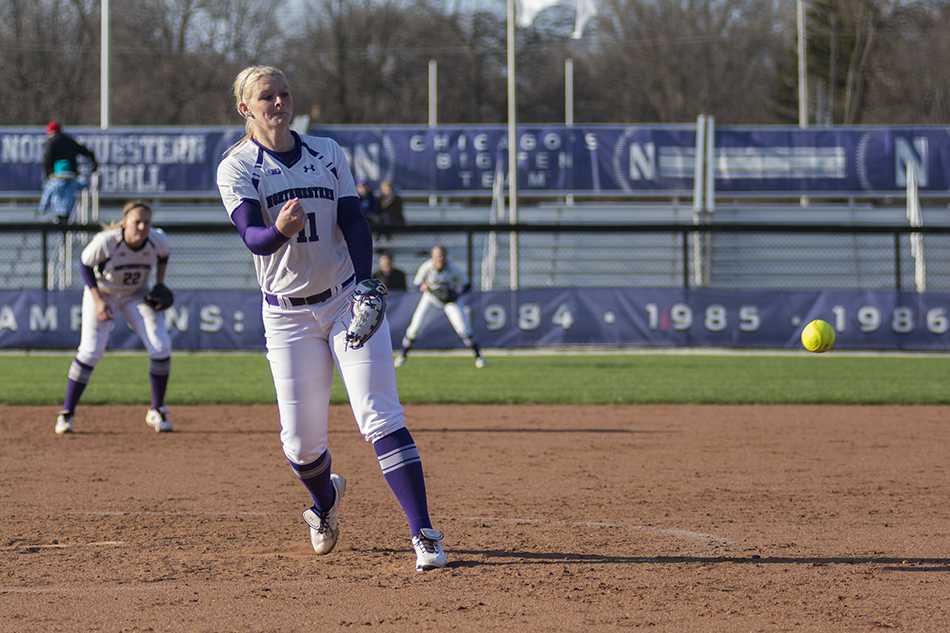 Run prevention was a problem for Northwestern in the two defeats that ended the Wildcats’ NCAA Tournament run. Sophomore Kristen Wood, the team’s primary pitcher all season, took losses to Brigham Young and Washington, allowing 8 earned runs in 8 1/3 innings pitched over the two games.

In what proved to be an up-and-down weekend in Seattle, Northwestern battled back from an opening-game defeat to earn a spot in the NCAA regional championship but fell Saturday in five innings to host Washington.

Down 5-0 in the fifth inning, the Huskies’ (36-13) Hooch Fagaly launched a grand slam to extend Washington’s lead and dash the Wildcats’ (35-18) NCAA Tournament hopes.

NU reached Saturday’s championship by navigating the double-elimination bracket. The Cats began postseason play Thursday with a loss to Brigham Young. After the two teams were locked in a pitchers’ duel for five innings, the Cougars broke the game open with 5 runs in the fifth inning and went on to win 7-2.

“We let the game get away from us a little bit giving up that big inning,” coach Kate Drohan said. “I thought we had some moments, especially with (senior outfielder Emily) Allard’s big hit to get us back in the game.”

NU rebounded with a strong day Friday. After thrashing Iona 14-4 in six innings, the Cats got their revenge against BYU, winning 8-3 to earn a trip to the regional championships.

“I think we did a good job seeing the pitches we wanted to hit and taking advantage of it,” DiPrima said. “Once one person gets going, the rest of us go. We really did a good job of sticking with our plan.”

The Wildcats were also powered by the performance of senior pitcher Sammy Albanese, who entered in relief against BYU. After freshman Nicole Bond struggled on the hill, Albanese provided the Cats with six scoreless innings.

“I come in there with the mindset that I’m going to help my team,” Albanese said. “Whether I come in in the second inning or the seventh, I’m going to do whatever I can to get our team on track.”

NU’s bats also had a breakthrough performance against BYU. After struggling to pick up timely hits in Thursday’s tilt, they responded with a strong team performance Friday, as five different Cats players picked up two hits.

“We had tremendous focus and even better energy,” Drohan said. “I really liked the way we played softball today. It was a long day for us, but we dug down deep and played one pitch at a time.”

A combination of timely hitting and a dominant performance from Albanese was the difference against BYU. Despite the slip-up on Thursday, the Cats earned a spot in the regional championship on Saturday, needing two wins over the Huskies to advance.

Washington was coming off of two run-rule victories against Iona and BYU and played like the fresher team Saturday.

Despite the lopsided final, the Wildcats were in the game until a big fifth inning from Washington put it out of reach.

Sophomore Kristen Wood gave up 3 runs on seven hits in 3 1/3 innings, before being relieved by Albanese. The senior stranded two batters in scoring position to keep the deficit to 3 runs.

However, the NU hitters couldn’t muster up any run support against Washington ace Kaitlin Inglesby, who allowed just five hits on the day. Meanwhile, Washington seemed to figure out Albanese, who pitched a complete game four-hitter in a 4-2 victory over the Huskies in February.

Washington broke open the game in the fifth after a bases loaded walk and Fagaly’s grand slam.

Seniors Allard and Mari Majam put up back-to-back singles in their final at-bats as Wildcats. After Allard stole second, Inglesby retired the next three Wildcat batters, ending the game and NU’s season.

The team has now appeared in the regional championship game in six of the past ten years.