The Daily Northwestern • May 18, 2014 • https://dailynorthwestern.com/2014/05/18/campus/award-winning-playwright-offers-advice-to-aspiring-students/ 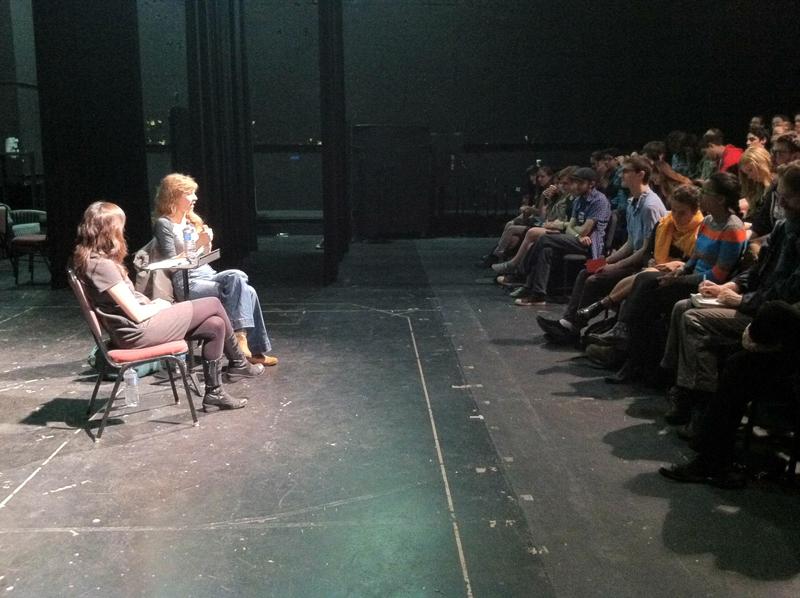 Annie Baker, a Pulitzer Prize-winning playwright, speaks Saturday at the Virginia Wadsworth Wirtz Center for the Performing Arts. During the event, Baker discussed how her career progressed and offered advice for budding playwrights.

A Pulitzer Prize-winning playwright spoke Saturday to about 70 Northwestern students and faculty about her creative process and the progression of her career.

The event, sponsored by Vertigo Productions, the Dramatists Guild and the Agnes Nixon Festival, featured Annie Baker, and was held at the Virginia Wadsworth Wirtz Center for the Performing Arts.

Baker won the 2014 Pulitzer Prize in drama for “The Flick,” a play about a small New England movie theater and its employees. She also won Obie Awards for her plays “The Aliens” and “Circle Mirror Transformation” and has written an adaptation of Anton Chekhov’s “Uncle Vanya.”

Communication lecturer Laura Schellhardt moderated the event and asked Baker questions submitted by students and faculty. Attendees also had the opportunity to ask questions at the event. The talk was attended mostly by undergraduate students, who asked about topics ranging from theatrical conventions Baker hoped would change in the future to how to tell if an idea is good enough to develop into a play.

At the beginning of the event, Baker talked about her first attempt at playwriting, when she applied to a student playwriting contest at age 16 but was afraid to submit her play. She said starting out as a writer, her talent didn’t quite live up to her taste and she found herself struggling to write the theater she wanted to see.

Baker said she frequently works with director Sam Gold, and she bonded with him over theatrical conventions they both dislike.

“Some of the things that Sam and I hated so much had to do with theater trying to be more like film and television, trying to cover up its ‘theaterness,’” she said. “One of the things the two of us discovered we both hated so much were ‘pop-y’ theater transitions with loud music to try to keep the audience excited and cover up the fact that people were awkwardly moving chairs on and off the stage.”

Wyatt Fair, Communication junior and incoming Vertigo playwriting chair, said as a theater student, he had a lot of the same thoughts and ideas as Baker about the artistic process.

“It was enlightening to see someone who really focuses on the space that she wants create through her plays,” he said. “I know her writing fairly well and I think she doesn’t worry about theater being theatrical … as an actor and a young playwright, it was enlightening for me for both processes.”

Communication sophomore Eva Victor, the incoming development director for Vertigo Productions, said Vertigo was enthusiastic about bringing Baker to NU through a partnership with the Dramatists Guild in New York City.

“When we heard Annie Baker would be in town this weekend, we freaked out. We were so excited,” she said. “Vertigo has never sponsored an event like this before, so I think with our new relationship with the Dramatists Guild, we’re very fortunate and excited about what kind of opportunity we could give to students here and to the campus by bringing in new, inspiring playwrights.”

During the event, one student asked Baker what plays she would recommend to aspiring actors and dramatists to read. She said it depends on the person’s individual taste, and encouraged students to read other genres, becoming scholars as well as artists.

“Read novels, read philosophy and read history,” she said. “I do feel like there’s this tunnel vision that happens with dramatic writing students in playwriting or screenwriting where you think you should just be reading plays and watching movies, and I think that’s a huge mistake. I feel like we should be grappling with politics in our roles as artists and the history of not just theater, but the world.”