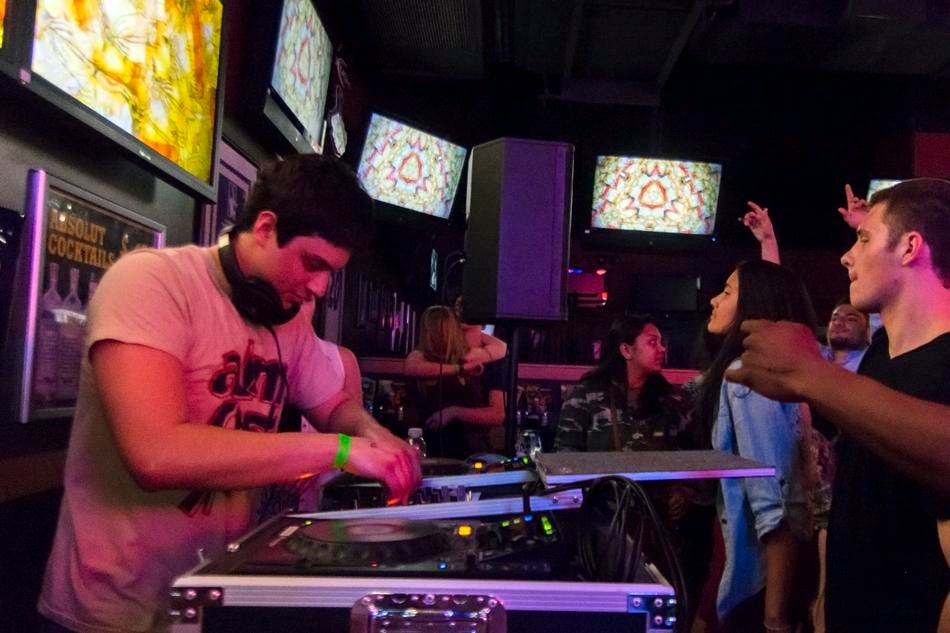 Lucas Messore performs at Mayfest’s Battle of the DJs Thursday night. As the winner of the competition, Messore will perform at Dillo Day later this month.

After winning Mayfest’s Battle of the DJs for the second year in a row, Bienen junior Lucas Messore (“Behind These Eyes”) is ready to claim his place on the Dillo Day stage.

Messore has been playing guitar since he was 10, leading to an early love of rock and jazz guitar. He said he became interested in electronic music closer to 16 or 17, after producing music on the computer for a few years. It wasn’t until his freshman year at Northwestern that he began DJing through Streetbeat, a radio show on WNUR.

“They helped me learn how to DJ and they had a bunch of equipment, so I got started that way,” Messore said.

Messore said the program, which features local Chicago DJs and NU students, is a “fun environment.” In addition to actually DJing, he said he also enjoys that everyone gets together for meetings in which one member will give a presentation on a certain type of music.

“It’s really like a whole community at this point,” Messore said. “(It) includes a lot of DJs that are interested in exploring music intellectually with specific regard to electronic music.”

WNUR also has a recording studio where DJs can work on their music. Medill sophomore Adrian Stubbs, another Streetbeat DJ, has collaborated with Messore on more than one occasion.

“I feel like he’s really hitting his niche now,” Stubbs said. “When someone makes music, there’s a point where they say, ‘Yeah, this is exactly what I thought of and created and it came together.’”

Messore was influenced by his original major in jazz guitar performance, which he pursued before switching to a broader music degree. Though he is no longer a performance major, he said he can’t deny the role it played in shaping his taste and style. With this background, Messore will often sample jazz or rock tracks or will record himself playing guitar for his mixes.

“I’ve been inspired by connecting very different types of music under electronic music,” Messore said. “It keeps it fresh.”

When creating a new mix, Messore said he doesn’t use the same workflow every time, because all songs are different. He does, however, go through phases of how he likes to work. Right now, he said he enjoys writing a chord melody on guitar, altering it digitally and putting a beat over it.

“It’s a process,” Messore said. “You start with an idea and then mess with until it evolves into something else.”

Messore said he was initially hesitant to “try his luck” at Battle of the DJs again, after placing first last year but being unable to play at Dillo Day due to rain. After winning for the second time, he said there was an increase in traffic on his SoundCloud website where he posts recordings, which has sparked his excitement.

“All the applicants did really well, but Lucas’ mix was very original,” the SESP junior said. “He did a good job keeping the crowd hyped and he was creative.”

Leading up to Dillo Day, Messore said he wants to put out as many tracks as possible. He does not have a set plan to prepare for the day, but said he may make a few playlists and figure out what will work best.

“I want to play what feels right in the moment,” Messore said. “Arguably, that’s what DJing is.”