The Daily Northwestern • May 7, 2014 • https://dailynorthwestern.com/2014/05/07/campus/author-speaks-on-diversity-and-inclusion-as-part-of-womens-center-series/ 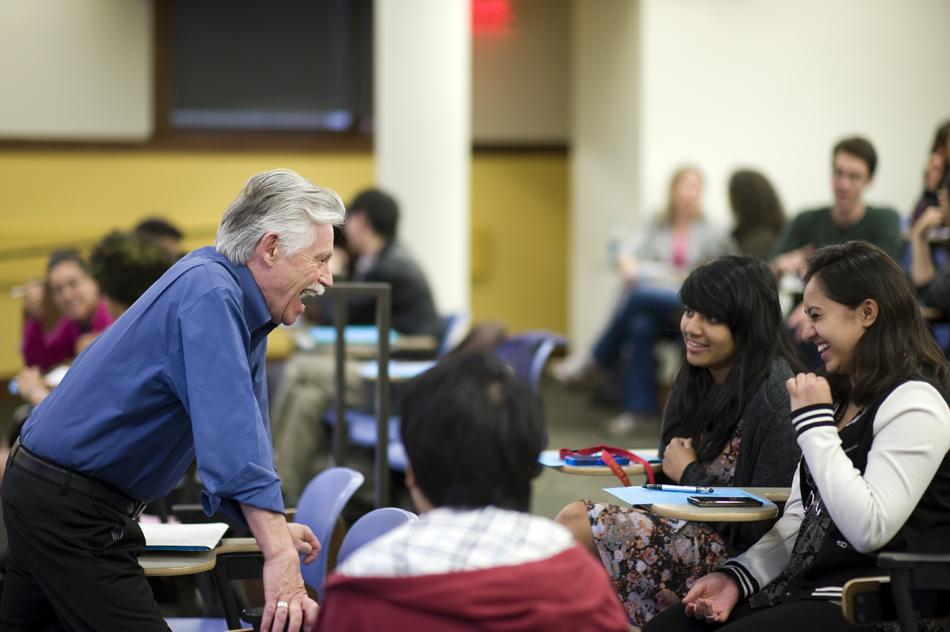 Author Gary Howard interacts with students during his talk Wednesday night. Howard spoke about creating a culture of acceptance and respect at Northwestern.

Howard, founder of the REACH Center for Multicultural Education, led a workshop on diversity and inclusion hosted by the Women’s Center. He led two workshops on NU’s Evanston and Chicago campuses and will lead two more Thursday.

The workshop, titled “The Next 50 Years: Creating a Campus Climate of Equity and Respect” is the third and final keynote address in the Women’s Center’s “Power and Privilege: A Call to Action” series, which focuses on promoting power and social change, as well as creating a more welcoming environment at NU.

Renee Redd, the director of the Women’s Center, said the series aims to promote inclusion in all forms.

“We had students coming to us who said they hear sexist and racist comments made in the classroom context that make them feel vulnerable,” she said. “When the conversation turns to race, for example, and everyone looks to the only person of color in the room, it silences people.”

“Our goal this year was to give people tools to talk about these things,” she said.

Howard, author of “We Can’t Teach What We Don’t Know,” spoke about his experience growing up isolated from any kind of diversity in an all-white neighborhood.

“I didn’t really even have a sense of being white,” Howard said of his high school experience. “I didn’t sit in the cafeteria surrounded by white guys talking about what it’s like to be white.”

Howard received his undergraduate degree from Yale University, and attributes his awakening to diversity to his experience volunteering in the inner city in New Haven, Connecticut.

“I started realizing all the advantages I had that I thought were just normal,” he said. “I was smart, but utterly ignorant in terms of the world I live in.”

The event drew about 30 students and staff to Harris Hall, and Howard focused on audience participation.

Howard addressed the many ways students and employees bring diversity to NU through “lenses of difference” such as age, gender, race and religion, and asked the audience to share experiences of carrying those differences on campus in small group discussions.

“We need to create safe spaces where people can share their stories,” he said. “And if we share them, we have to make sure someone is there listening.”

Audience members shared experiences of economic and ethnic diversity on campus, and talked about some of the obstacles they encounter in moving beyond recognition of each other’s differences.

“Diversity just is,” Howard said. “You can’t be for or against diversity. It’s not just about having a diverse population, it’s about what you do with that diversity.”

Weinberg junior Jazz Stephens said she came to the event to engage in the discussion of microaggressions on campus.

“It’s very affirming to hear these conversations happening, and to be in a space where people are willing to talk,” she said.

Redd said the “Power and Privilege” series has sparked dialogue on campus.

“These events have given people opportunities to be honest and grapple with other people’s thoughts and perceptions,” Redd said.

Howard emphasized the importance of the work the Women’s Center has done in creating the space for conversations about campus inclusion.

“People think if we talk about our differences, we’re going to divide ourselves,” he said. “No. We are divided because we haven’t had those conversations.”