The Daily Northwestern • May 6, 2014 • https://dailynorthwestern.com/2014/05/06/campus/doug-chris-collins-share-stories-emotions-during-panel/ 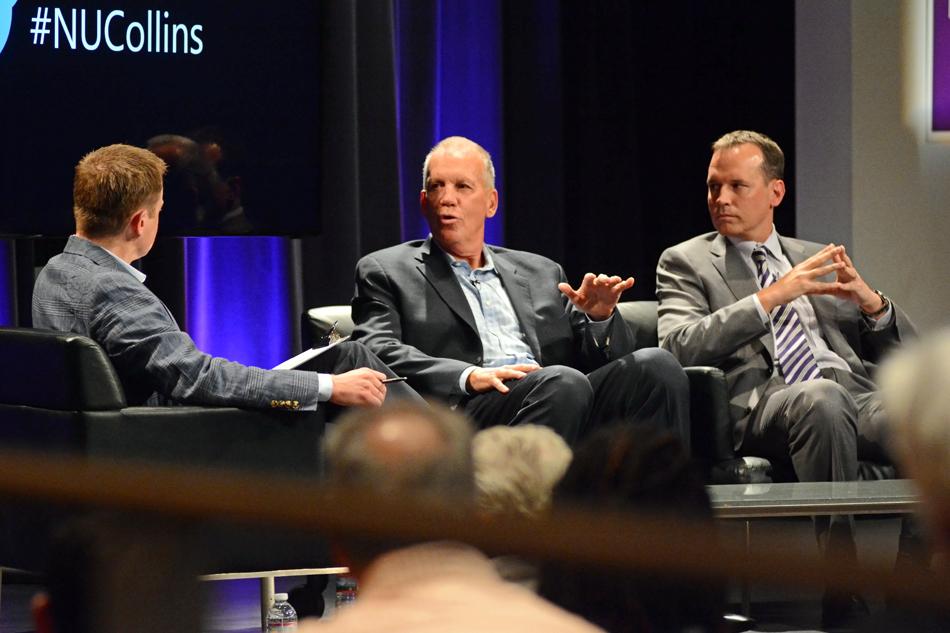 Doug Collins speaks at the McCormick Tribune Center Forum on Tuesday evening as his son Chris looks on. The Collins talk was part of Medill’s “Beyond the Box Score” sports media lecture series.

The event, which nearly filled the McCormick Tribune Center Forum, was part of the “Beyond the Box Score” series of sports journalism lectures and panels. Dave Revsine, the lead studio host for the Big Ten Network, moderated the discussion before opening the floor for a question-and-answer session.

Much of the conversation centered on the pair’s struggles growing up and growing old around basketball. Doug Collins said he faced many challenges balancing his own career with his son’s burgeoning basketball aspirations.

“I always was very fearful of wanting to be looked at as somebody who was pushing him to do something he didn’t want to do,” Doug Collins said, “I didn’t want to be his coach. I wanted to be his dad. That was really important.”

Chris Collins said as a child he understood his father was on an NBA schedule. But he said they spent a lot of time together because of their mutual love for the sport.

“Anytime he could be at one of my games or be at a practice or just to be able to go in the backyard and shoot hoops and talk about the game,” he said. “That really mattered to me.”

Chris Collins continuously dug up entertaining childhood stories throughout the event. He recalled lacing up Michael Jordan’s shoes before every home game when his father was the Bulls’ coach. He remembered shooting in front of a playoff crowd in Chicago Stadium before the players came out to warm up. Then, he recalled the night a swarm of reporters outside the Collins’ home told 14-year-old Chris his father had just been fired.

“It was the first time I was ever told I wasn’t needed in my lifetime,” Doug Collins said. “That hurts. That really hurts.”

Both the most lighthearted and emotional moments of the night occurred when the pair began talking about NU basketball.

Doug Collins said he had thought of NU’s program as a “tremendous failure” which was received by a chorus of laughs. Chris Collins later jokingly referred to NU’s 55-54 win against Minnesota as an “offensive explosion.”

As the event progressed, Chris Collins began tearing up as he spoke about the team’s upset victory over Iowa in the Big Ten tournament. The Hawkeyes had beaten the Cats twice by a combined 52 points prior to their tournament game.

“It showed that we’re on the right track,” Chris Collins said. “Sometimes it’s not measured in wins and losses and you don’t fully get that but the way we finished that year, it shows that there’s a lot of good on the way.”

Chris Collins told The Daily after the event he didn’t expect to be so emotional while he was talking, but that it didn’t completely surprise him.

“When you’re passionate about stuff and you put a lot of yourself into it, sometimes there are certain things that trigger emotion,” he said.

Medill freshman Jason Dorow said he thoroughly enjoyed the event and thought it was interesting to see the relationship between the two.

“It was really cool hearing about their love for the game and seeing their father-son bond,” he said.