The Daily Northwestern • May 5, 2014 • https://dailynorthwestern.com/2014/05/05/city/bags-evanston-aldermen-eye-banning-plastic-bags-after-chicago-bill-passes/ 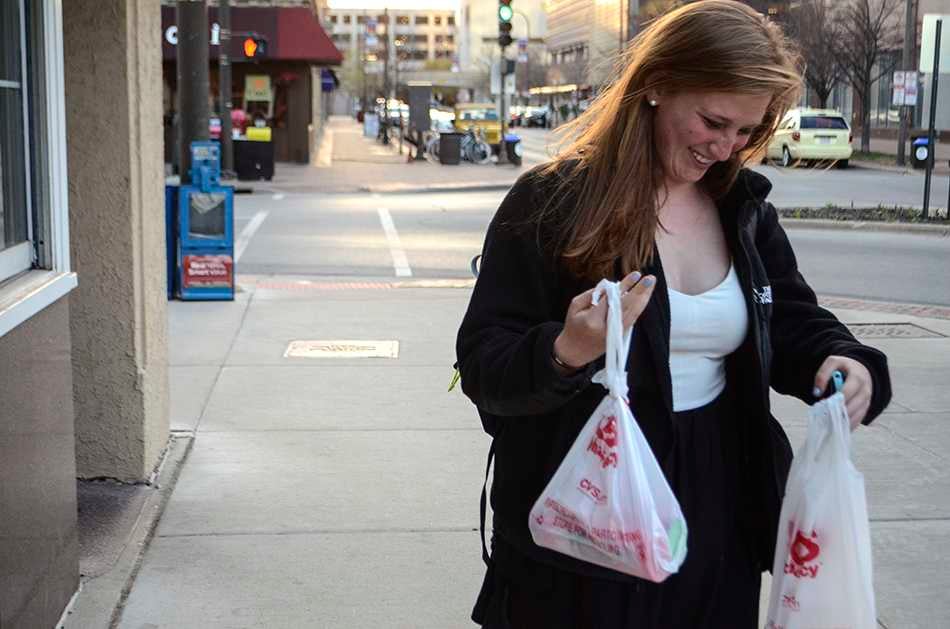 Weinberg freshman Jessica Hoffman uses plastic bags after a trip to the drug store. Some Evanston aldermen say they would support a plastic bag ban in Evanston.

Some Evanston aldermen would like their colleagues to revisit outlawing plastic bags following the Chicago City Council’s decision last week to partially ban them.

“I would certainly be willing to send it to a committee to at least have a discussion and review the Chicago ordinance,” Ald. Ann Rainey (8th) said Monday afternoon, calling a ban a no-brainer given how many stores already require — or at least encourage — the use of reusable or paper bags.

Evanston City Council weighed the idea in 2011 but eventually backed off after not seeing enough momentum for a policy change, Ald. Jane Grover (7th) said. She and Rainey agreed the Chicago ordinance, which passed Wednesday in a 36-10 vote, could be the impetus for taking another look at the issue in Evanston.

“With Chicago addressing the issue … it makes sense for Evanston to expand that policy north of Chicago’s border,” Grover wrote in an email to The Daily shortly after Chicago aldermen approved the legislation. “As two major lakeshore cities, we’ll both be more effective tackling plastic bags together.”

Sponsored by Ald. Proco “Joe” Moreno (1st), the Chicago ordinance gives stores larger than 10,000 square feet until August 2015 to stop offering plastic bags or face fines ranging from $300 to $500 per violation. Smaller stores have another year before they must obey the partial ban.

The Chicago legislation, which passed with the support of Mayor Rahm Emanuel, carves out exemptions for restaurants and small businesses, who often argue they cannot afford to offer the more expensive alternatives — paper or reusable bags — without raising prices. Supporters of banning plastic bags, meanwhile, say they harm the environment in a variety of ways, littering streets and clogging waterways.

Eleanor Revelle, president of Citizens’ Greener Evanston, said the environmental group has not taken a position on dealing with plastic bags intended for single use. The organization, however, encourages consumers to shop with reusable bags, a goal that Revelle said fits in with Citizens’ Greener Evanston’s “three Rs” strategy regarding solid waste management: reduce, reuse and recycle.

Dick Peach, an environmental activist who participated in the 2011 discussion of the issue  the former president of the Evanston Chamber of Commerce, said he would likely support any effort to ban plastic bags in Evanston.

“If you’re going to ban them, ban them,” said Peach, who stepped down in January as president of the Evanston Chamber of Commerce. “If it’s done right, it’s no inconvenience to us,” he added, referring to the city’s business community.

What he opposes, he said, is taxing bags, a move Evanston aldermen considered in 2011. Doing so would give small businesses another tax to worry about collecting, as well as make them “look like the bad guys” when they have to explain the additional cost to their customers, he said.

Ald. Judy Fiske (1st) has also spoken against taxing plastic bags, predicting during the 2011 discussion of the issue that doing so would have a “devastating impact on small mom-and-pop-type businesses.” Fiske, who owns the pet store Fit + Frisky, 824 Noyes St., did not respond to a request for comment Monday afternoon on her colleagues’ renewed interest in addressing plastic bags.

Asked for his advice for Chicago suburbs like Evanston weighing the issue, Moreno spokesman Matt Bailey said supporters of banning plastic bags need to be patient, passionate and willing to compromise. Wednesday’s vote was three years in the making, Bailey said, and even then, Moreno did not get everything he wanted in the bill.

“Obviously you can’t please people all the time, but you want to please as many people as you can,” Bailey said.

“The minute I saw the Chicago thing,” Rainey said, “I knew that we would at least have to talk about it again.”