The Daily Northwestern • May 4, 2014 • https://dailynorthwestern.com/2014/05/04/sports/mens-golf-northwestern-finishes-fourth-at-big-ten-championships-perry-grabs-third/ 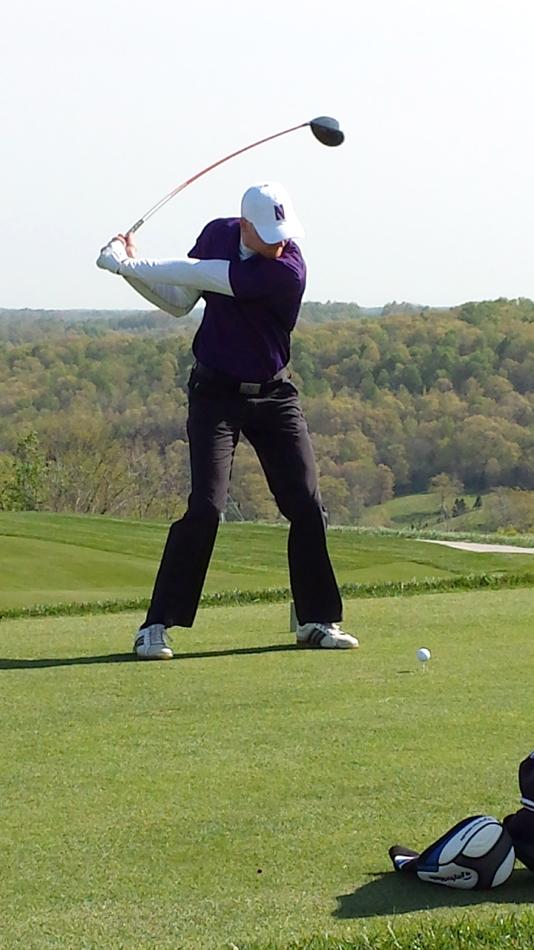 Senior Jack Perry finished third at the Big Ten Championships, leading Northwestern to a fourth-place team finish but was unsatisfied with both results. “To never get a Big Ten Championship ring either with the team or individually is a bust that will go on my golf career no matter what I do,” he said.

Northwestern followed up last year’s disappointing showing at Big Ten Championships with an effort right in line with its ranking, but it did not produce a conference title.

The Wildcats came in fourth place Sunday in the 72-hole event played in French Lick, Ind., at the Pete Dye Course at the French Lick Resort. The No. 50 Cats entered as the fourth highest-ranked squad and held right there, placing ahead of No. 43 Purdue but behind unranked Minnesota, No. 9 Illinois and No. 35 Iowa.

Coach Pat Goss was enthused by much of what his players did, but lamented the errors that cost the team a shot at the title.

“We did a lot of good,” Goss said. “At times, we made some nice birdie runs and got some good play from different players. But overall the four scores we counted were too high and we made too many mistakes that were in our control.”

It was almost as if NU was gravitating toward fourth place the entire time. The Cats were in fourth at the end of every round except the second round, when they were in fifth.

The predictable team showing was precipitated by a strong performance from Jack Perry. The senior and the team’s star player failed to match par in any of his four rounds at French Lick, but at a Pete Dye track that is pretty much standard fare. In the event, Perry produced three 73s and a 75, enough to put him in a tie for third place individually, five shots behind the winners.

Perry has consistently expressed high personal expectations, and in the aftermath of a top-five finish in his final go-round at Big Ten Championships, the sentiment was no different.

“Individually, if I don’t win Big Tens, it’s not a success,” Perry said. “There was a lot of encouraging golf, I just had some silly bogeys, which I’ve had the last few tournaments and I need to get sorted out. Obviously I’m happy with third place, but to never get a Big Ten championship ring either with the team or individually is a bust that will go on my golf career no matter what I do.”

Perry’s performance doesn’t speak for the entire team, and once again NU showed individual results do not remain stagnant for long. After starting the spring season with a consistent blueprint for results, the top two in the lineup play great golf while the Nos. 3-5 produce little, the Cats have now moved in a different direction.

The No. 3 slot has become one of the strengths of the team. Matthew Negri had returned to prominence with consecutive top-30 finishes and bolstered that trend at Big Tens. The junior opened in 82 at French Lick, but followed the poor opening score with a pair of 75s and ended with a near-flawless final-round 69 that proved to be the best Sunday score among the 60 competitors, and good enough to move Negri from tied for 36th up to solo 19th-place finish.

Negri was pleased with his 13-stroke improvement from Friday to Sunday and said it will mean something going forward.

“This was probably the best round of the spring for me so far,” the junior said. “I was playing well for the last couple of weeks, so I tried to bring that with me. The first round it got away from me. I started off fine, so I shouldn’t have shot 82. Today was definitely a step in the right direction. It gives me a lot of confidence.”

For some players, the new blueprint for predicting results has too much event-to-event volatility to really be a blueprint at all. At the No. 4 spot, Scott Smith has surprised of late with good showings in his previous two events. But the redshirt sophomore only mustered a tie for 49th over the weekend, proving he is capable of poor results as well.

Perry’s high finish was actually a deviation from his recent play. In both April tournaments, the senior was outside the top 20, a place he hadn’t visited since the first event of the fall.

Such volatility could be seen as a negative, but it also implies potential.

“We’ve had different players show success,” Goss said. “We know that if we can get everybody playing well at the same time, there’s enough good play for us to be successful.”

Three members of the lineup have remained steady in performance. At the No. 2 spot, sophomore Andrew Whalen has played consistently solid golf, as has Negri at No. 3. The No. 5 spot, currently occupied by junior Bennett Lavin, is the weak link, with a struggle to find form there.

The Cats learned Monday they will be the No. 10 seed at the San Antonio NCAA Regionals site. The event will be held May 15-17 at the Briggs Ranch Golf Club, with the top five finishers advancing to NCAA Championships.

NU hopes regionals will not be its last event of the season. The seeding doesn’t help the Cats’ cause, but the team made it to nationals from the exact same position three years ago and as a No. 9 seed back in 2009. The Cats, once again a No. 9 seed, placed a single shot out of a playoff for an NCAA Championship berth in 2010.

NU has a proven track record in this seeding area. But can it happen again? The Cats were not particularly close to qualifying as a No. 9 seed in 2012, when they finished eighth, and the team’s results this spring, while sprinkled with dashes of promise, are not inclined to foretell a rise to occasion.

But Perry believes his team is dangerous, due to his conviction that this bunch has not gone too far above the minimum of what it can produce.

The Cats will have one more chance to overcome their season struggles and sort out the problems in their play. If they can’t, the season is over.

“Everyone on the team has good enough golf to win Big Tens by a landslide, we just for some reason, and I do this too sometimes, we struggle to put our good golf forward,” Perry said. “I don’t know if we are too results-oriented or what the deal is, but as Pat has said a lot lately, we’ve shown a lot of good signs. But the good signs haven’t come to fruition yet. We can potentially only have one tournament left, so it’s kind of all or nothing at the next tournament. We just need to figure out how to put our best foot forward.”