The Daily Northwestern • May 4, 2014 • https://dailynorthwestern.com/2014/05/04/sports/lacrosse-northwestern-lets-5-goal-lead-alc-title-slip-away-against-florida/ 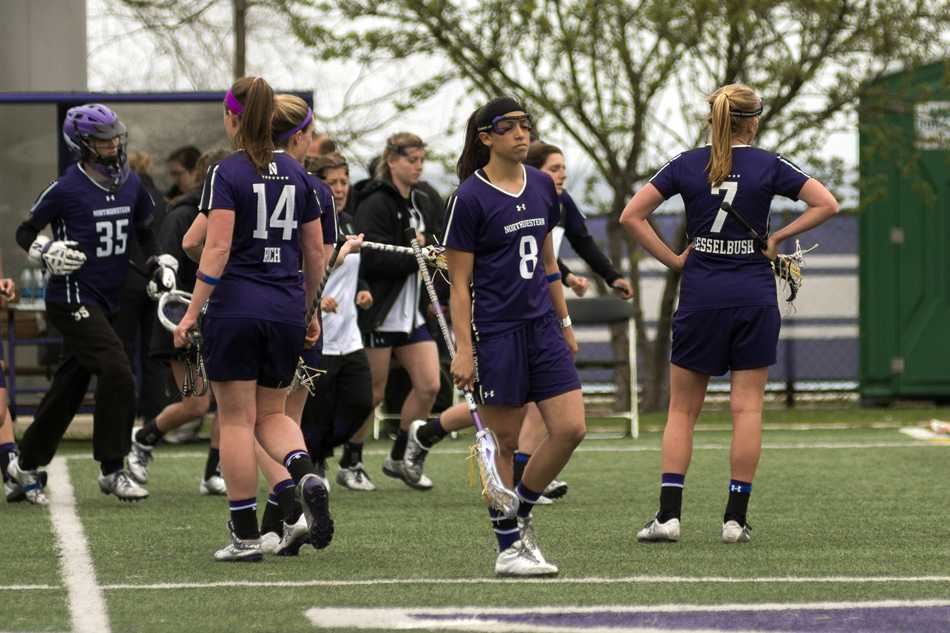 Junior Kara Mupo and the Cats blew a 5-goal lead Sunday to lose to Florida in the ALC Championship game. "We did everything wrong in the second half," coach Kelly Amonte Hiller said.

In the last-ever ALC championship game, a 5-goal lead wasn’t enough for Northwestern to keep rival Florida at bay.

After a near-perfect first half, the No. 3 seed Wildcats let their 7-2 lead slip away as the top-seeded Gators staged a methodical comeback to win 9-8 and take home the championship trophy for the second time in school history.

“We did everything wrong in the second half,” coach Kelly Amonte Hiller said. “We had the advantage, they were coming out and playing us, we just couldn’t get it done.”

The nail in the coffin for the Cats was the last two minutes of the game, when the teams were still tied 8-8 and the Gators held possession on offense for about two minutes.

Florida ran down the clock and scored with 32 seconds left, and NU ran out of time to answer with a goal of its own.

Sunday’s title game was the second time the Cats and the Gators played on Lakeside Field this season. The first meeting, on April 19 during the regular season, also ended in a one-goal Florida victory.

Though the regular season game saw a slow start from the Cats, NU was quick out of the gate Sunday. Senior attack Christy Turner scored off an assist from draw control specialist Alyssa Leonard less than 90 seconds into the game, and the Cats kept possession for most of the half after that.

NU outshot Florida 13-7 and turned the ball over only three times during the first half, when the Gators’ defense was giving the Cats more room to play on offense and NU executed its patient, stalk-and-strike possession game to perfection.

Leonard also won seven draws to Florida’s three, and she and junior attack Kara Mupo led the team with a pair of goals apiece going into halftime. Turner and fellow seniors Kate Macdonald and Kelly Rich accounted for the team’s other three scores.

The second half was when the Cats shut off.

After Friday night’s victory over Ohio State in the tournament semifinals, in which the Cats rallied from a 3-goal deficit to beat the Buckeyes, Amonte Hiller said she hoped her team was prepared for Florida after facing different game situations throughout the season.

But NU undoubtedly feels more comfortable when faced with a need to rally than when playing with the lead.

“We should have come up with ground balls and we didn’t,” Amonte Hiller said. “Our level of intensity and focus, when you’re down you play a lot harder. …We tried to come out like that, but in the second half we did not play like that.”

The Cats shot only four times and scored only once, a tally from Mupo in the fifth minute of the period, in the entire second half.

NU also had trouble staying poised during possessions, and Florida’s characteristically tight defense was quick to take advantage of bad passes, often forcing the Cats to throw the ball away.

After the game, the atmosphere was heavy at Lakeside Field, and both Amonte Hiller and Turner said NU only had itself to blame for letting the championship slip away.

“We can play with anyone,” a shaky-voiced Amonte Hiller said over the whoops and chants of a Florida celebration in the background. “The biggest issue is we tend to kill ourselves.”

Turner agreed with her coach, adding the team will shape its own destiny with NCAA Tournament first-round play looming less than a week away.

“It’s up to us to determine what we want for this team,” she said.