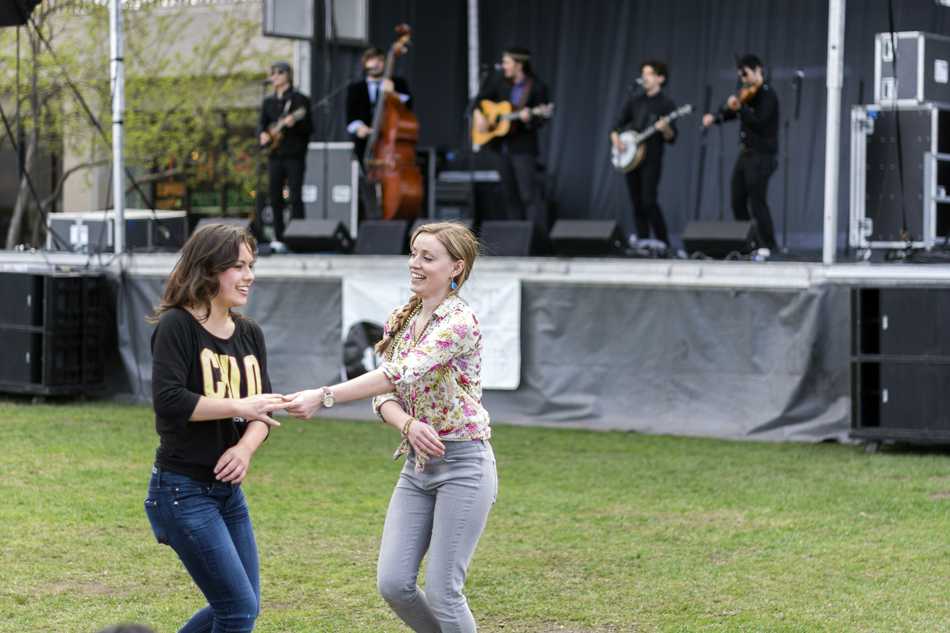 The Deadly Gentlemen perform Saturday at Philfest. The event, organized by A&O Productions and SEED, is held annually in memory of Phil Semmer, a former SEED member who died in a 2000 car accident.

Members of the Northwestern community gathered together Saturday to listen to bluegrass and folk music on Norris University Center’s East Lawn, taking advantage of the nice weather for the annual Philfest concert.

A&O Productions and Students for Ecological and Environmental Development organized the event, held in memory of Phil Semmer, a former SEED member who died in a car accident. Philfest is held every year in his memory and as part of an effort to bring about greater environmental awareness.

Sunnyside Up and Todd Kessler opened the concert with The Deadly Gentlemen headlining the event. The crowd laid out on the grass, played games and danced to the music as the different groups took the stage.

A&O concerts chair Morgan Hecht said the organization was excited about recruiting local artists and that students seemed to be enjoying the music and the event.

“We want to make sure it’s engaging and fun, people start dancing and all these bands are super talented and really high energy too,” the Communication junior said. “This is an event that people come stumble upon or know through other organizations and it’s just like a nice day to listen to music so even if you don’t know the artists, people tend to enjoy it a lot.”

During the concert, several student groups, including Project Wildcat, WildRoots and Associated Student Government, set up booths and held different games and activities. Members of SEED sold shirts to benefit the Rocky Mountain Institute, a nonprofit working for sustainable energy use and Semmers’ favorite charity. For the first year, a bike-operated smoothie maker was also set up to give students a fun and energy-efficient way to make their own drinks.

SEED co-president Madeline Miller said more student groups were represented this year, which she said would bring about greater awareness for the cause. She added that she was excited the event encouraged students to participate in a different kind of programming than NU normally puts on.

“Personally, I see a lack of programming at Northwestern that kind of fits this niche of interests like folk music, music festivals and like hanging out in the sunshine. It makes me feel like I’m at home in Portland,” the Weinberg junior said. “And we hope to get the names of different student groups out there and show people what we do.”

The groups represented at Philfest encouraged attendees to join them, said SEED service co-chair Leena Vilonen. The Weinberg sophomore added that she hoped attendees would gain awareness about how many environmental student groups there are on campus and sign up to be a part of them in addition to listening to music.

Throughout the day students lingered around the Lakefill, coming in and out of the concert area. Concert-goers played frisbee and other lawn games and relaxed with their friends as the different artists played their sets. By the end of the day, several attendees were dancing by the stage as The Deadly Gentlemen engaged the audience with their music.

Members of A&O said when planning the concert, they were hoping students would use the day as an opportunity to enjoy the music and take a break from studying.

“We have such a beautiful campus and I feel like a lot of times we don’t have the time to enjoy it,” A&O spokeswoman Rosalind Mowitt said.

Students and organizers were especially excited about the nice weather this year, as last year’s event had to be moved indoors. They said this year’s concert had a great turnout and gave students the opportunity to take advantage of NU’s campus.

“By the nature of the event, it kind of merits that people are walking to the Lakefill and kind of coming back and going in and out and so last year when it was inside it didn’t have that same feel because you couldn’t be outside all day,” A&O chairman Demetrios Cokinos said.

Students who attended the concert said it brought together a different variety of people than they have seen at other events. Weinberg freshman Stephen Rhode said having an event that was held outdoors and open to all students created a more cohesive campus environment.

“We love the environment. We love being outside,” Rhode said. “It’s awesome that Northwestern has events like these where I feel like it really brings the student population together.”

A&O spokeswoman Shelly Tan said the weather, environment and music created the perfect combination for an outdoor music festival to give students a nice break and a chance to enjoy the weather.

“That moment when the clouds finally part and the sun kind of finally shines down and we’re all happy and warm, I think that really exemplifies the vibe that we’re going for in that we want people to get out and have some fun,” she said.