The Daily Northwestern • May 2, 2014 • https://dailynorthwestern.com/2014/05/02/sports/lacrosse-northwestern-rallies-past-ohio-state-advances-to-eighth-straight-alc-title-game/ 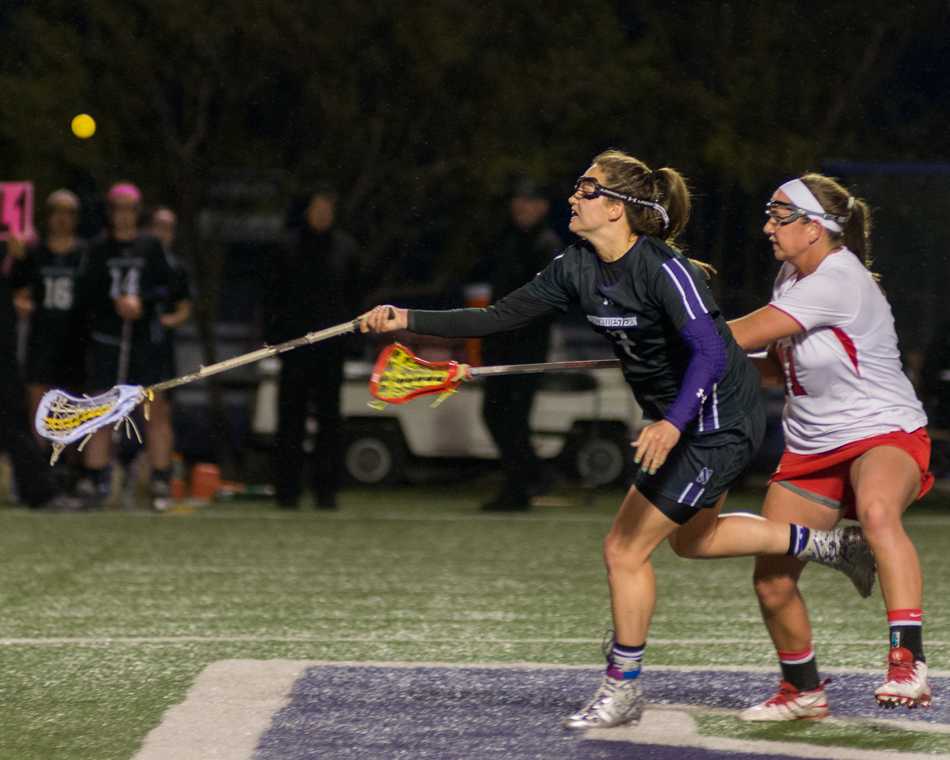 Draw control specialist Alyssa Leonard reaches for the ball after a draw. The senior's performance in the circle improved drastically in the second half, collecting 10 draws compared to 3 draws in the first.

It ended on a false start.

With 30 seconds left in regulation of the ALC Tournament semifinals Friday, Ohio State had a free-position shot and the chance to tie Northwestern, but the referees called a false start on the second-seeded Buckeyes. The third-seeded Wildcats ran out the clock to win 9-8.

The semifinal matchup was the second come-from-behind effort in as many weeks for NU, after falling a goal short against Florida a week ago.

Coach Kelly Amonte Hiller said games like Friday’s — in which NU was trailing by 3 goals early in the second half — better prepare the team for pressure situations.

“I think this team is very tested, and I’m hoping that pays dividends on Sunday,” Amonte Hiller said. “We’ve come from behind, we’ve gone ahead and held leads, we’ve really been in all different situations. This season has been a great preparation for a moment like Sunday.

After a first half full of careless passes for NU and six turnovers for both teams, it was the Wildcats’ seniors who finally led the comeback charge in the second half. With just under 16 minutes left, it was draw control specialist Alyssa Leonard who took over for the Cats.

Leonard led the late-game attack, grabbing 10 draws in the second half and kicking off the Cats’ 4-goal run that ate up less than four minutes.

Leonard started the run in typical fashion for the senior, winning the draw to herself and charging down field to notch what was only NU’s sixth goal at the time.

“I knew we definitely needed something to light the fire,” Leonard said. “I wasn’t really looking for it, I got the ball, I came down, it was kind of like everyone just parted — there was a clear lane, so I just took what was ahead of me.”

Fellow seniors Christy Turner and Kelly Rich contributed the other 3 goals in the hot streak — a career-high 2 for Turner, and 1 for Rich — to give the Cats a 2-goal lead, NU’s largest of the game, that would ultimately be just enough cushion for a win.

Turner and Leonard led the team with a hat trick each, and senior Kat DeRonda filled out the veteran leadership with 2 goals of her own.

Senior defender Kerri Harrington led the Cats’ at-times-sluggish defense, impressively holding of the Buckeyes for most of the last 12 minutes of the game. It was just enough to make up for Ohio State attack Katie Chase’s 5 goals on the night.

The seniors made up for quiet games from several stalwart players the Cats have come to depend on the past few games. Junior attack Kara Mupo, after scoring 9 goals over the past two games, posted only one shot on the evening. Junior attack Jess Carroll only recorded a ground ball.

Leonard said her own lackluster performance in the first half, during which she only won three draws, was due to a lack of focus. The senior said there was no conversation among the team during the second half, and of late it seems as though it simply takes NU three quarters of a game to kick its play into high gear.

“We came out a little bit flat,” Leonard said. “And we kind of all just looked at each other and were just like, ‘Let’s get this thing done.’ I think we did just that.”