The Daily Northwestern • May 1, 2014 • https://dailynorthwestern.com/2014/05/01/sports/lacrosse-wildcats-navigate-past-commodores-in-opening-round-of-alc-tournament/

Lacrosse: Wildcats navigate past Commodores in opening round of ALC Tournament 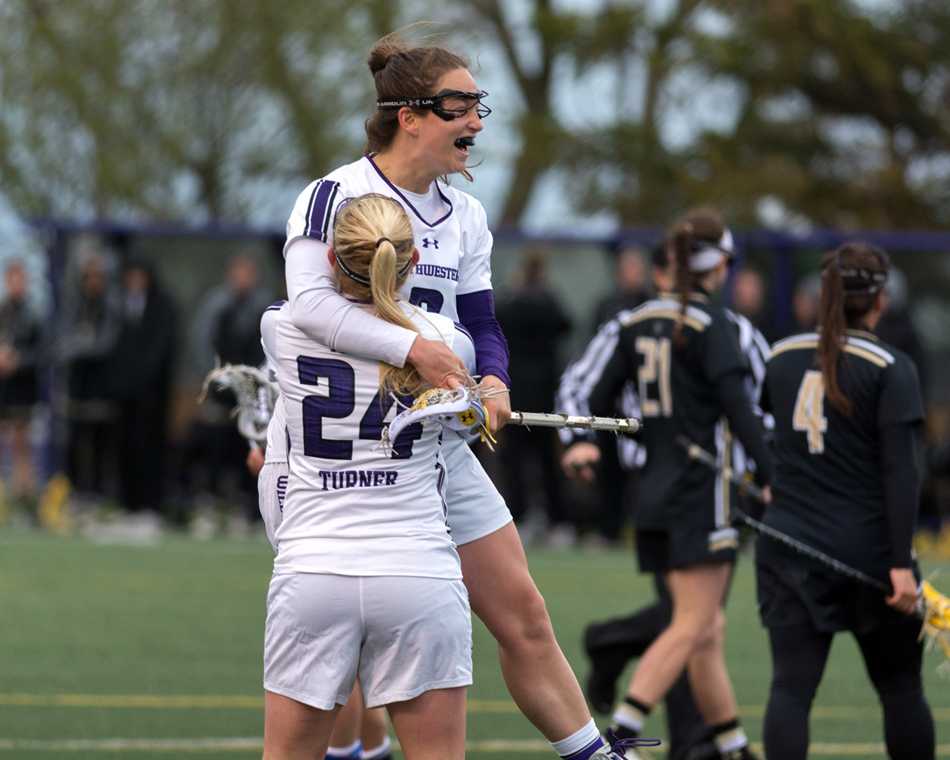 Not much changed this time for Northwestern, except for maybe the weather.

The matchup was the second meeting of the two teams this season, with NU winning the first 15-9 on April 10.

It was business as usual for the Cats right from the start, with senior attack Kelly Rich launching the opening salvo to give NU an early lead just three minutes in.

The Cats added five more goals during the first half, with Rich tallying another and attacks junior Kara Mupo and senior Alyssa Leonard contributing two each of their own. The Commodores looked down and out, save for the efforts of midfielder Jill Doherty.

A freshman, Doherty throttled the NU defense for four goals in the opening half. Junior goalkeeper Bridget Bianco seemed to have trouble tracking Doherty’s left-handed shot, and the NU defenders couldn’t keep her away from the net.

“They were wide-open looks on (Bianco),” Amonte Hiller said. “That’s tough as a goalie. You have to help your goalie out as much as possible, get low-angle shots and give them a chance to make a save.”

Despite the Cats controlling possession throughout the half, thanks to Doherty NU only led 6-5 at intermission.

But over halftime, Amonte Hiller proved why she is among the best in the sport.

NU made the necessary adjustments on defense, conceding only one more goal to Doherty, and came up with a handful of clutch shots on offense to pull away for the victory. The Cats went on a 4-1 scoring run to end the contest.

“Our defense did not come out very strong,” Amonte Hiller said. “As it slowed down toward the end of the first half and the second half, they started to play better.”

And as Vanderbilt slowed down, NU began to speed up.

In one ten-second stretch, senior midfielder Christy Turner assisted Mupo on a beautiful cut in front of the net, then corralled the ensuing draw and raced down the field on a breakaway to score a goal of her own. The pair of tallies gave NU a 10-8 lead they wouldn’t relinquish.

After Doherty faded, midfielder Amanda Lockwood provided the only spark for Vanderbilt’s sputtering offense and finished with two goals.

With her late-season surge, Mupo now has 30 goals this season and has moved into a three-way tie with Leonard and DeRonda for the team’s scoring lead.

“I think (Mupo) has just gained a little bit of confidence in the last couple games,” Amonte Hiller said. “She’s being aggressive.”

NU will play No. 10 Ohio State (13-5, 5-2) on Friday in the tournament semifinals. The Buckeyes bested rival Michigan in their first round matchup 12-8.

NU and Ohio State met early in the regular season on Mar. 9, with the then-unranked Buckeyes scraping out an 11-10 overtime victory. The Cats rallied back from a halftime deficit but ultimately weren’t able to overcome 4 goals from Ohio State’s Katie Chase.

Even with the very short turnaround time between games, Amonte Hiller seemed confident in her team’s preparation.

“I think that we need to just regroup and look at the things we didn’t do well,” she said. “I think right now it’s about us. … Playing smart, playing aggressive defensively, playing together.”