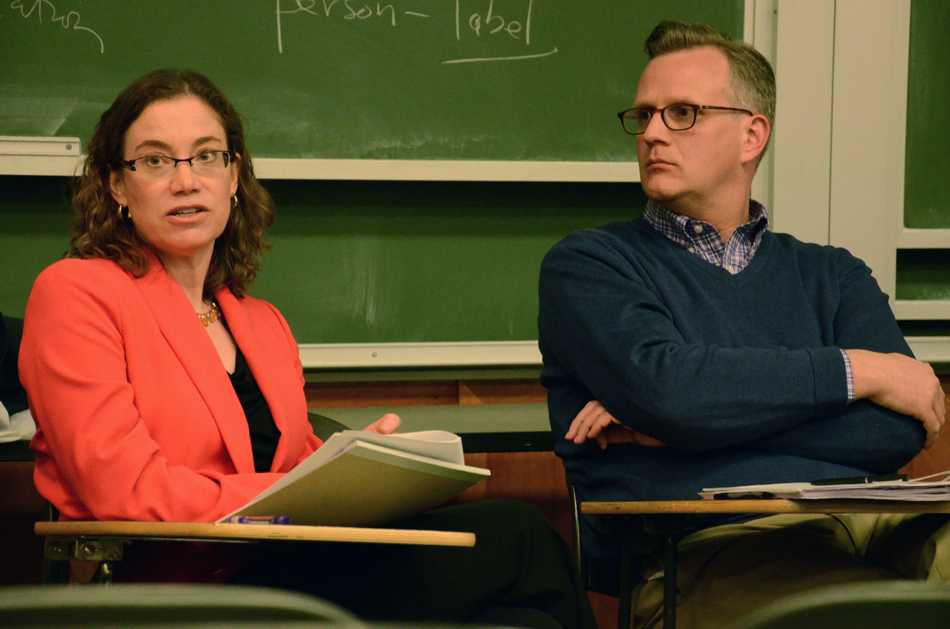 Joan Slavin, director of the Sexual Harassment Prevention Office, discusses Northwestern’s policy on sexual assault at a panel earlier this month with members of NU’s Title IX Coordinating Committee. Slavin said in an email to The Daily on Tuesday the University will consider the White House’s recommendations on fighting campus sexual assault in its own practices.

In response to the White House’s release Tuesday of detailed recommendations for how colleges should react to sexual assault on campus, Northwestern officials said the University’s current sexual assault policies align with the report’s suggestions, but administrators plan to further analyze the document.

The report was released alongside the launch of NotAlone.gov, a website that provides information and statistics about sexual assaults on college campuses. It was compiled by the White House Task Force to Protect Students from Sexual Assault, which President Barack Obama established Jan. 22 to address the recent surge in sexual assault complaints on college campuses.

The report cites the statistic that one in five women is sexually assaulted in college. It details ways to combat the trend and provides resources for each recommendation, asking colleges to conduct campus climate surveys, train community members in bystander intervention and respond with flexibility to students’ reports of sexual assault, among other practices.

“When one of its students is sexually assaulted, a school needs to have all the pieces of a plan in place,” the report said.

The report also reaffirms universities’ obligations under Title IX of the Education Amendments of 1972 and the Clery Act, which address sex discrimination in education and campus safety reports, respectively.

Joan Slavin, director of NU’s Sexual Harassment Prevention Office and Title IX coordinator, said the report’s strategies for combating sexual violence are helpful to the University. She said NU’s sexual misconduct policy, the victim services provided by the Center for Awareness, Response and Education, the Step Up! bystander intervention program and partnership with other local organizations align with the White House’s recommendations.

Slavin said in an email to The Daily that the University’s Title IX Coordinating Committee, which includes the Sexual Harassment Prevention Office, CARE, the Dean of Students Office and other administrators, “will closely examine the report and the supplementary materials it provides to determine what additional steps we should be taking in this area.”

The report supports including an investigative role in a school’s judicial process following a sexual assault report, which Tara Sullivan, director of student conduct and conflict resolution, said NU is looking to implement. The University is currently revising its Sexual Assault Hearing and Appeals System.

“The report includes a toolkit on conducting a climate survey, including sample questions, which will be very useful to us,” she said in an email.

Weinberg junior Kayleen McMonigal, outgoing treasurer of NU’s College Feminists, said she looks forward to seeing the results of such a survey. McMonigal was involved in planning the protest on campus of NU’s sexual assault policies during Winter Quarter, following a Medill junior’s lawsuit against the University for its handling of her sexual assault report.

“One of the big problems is that campuses have a lot of reason to try to keep the number of reported sexual assaults really low,” McMonigal said. “Anonymous surveys hopefully would shed more light on the real number of sexual assaults happening on different campuses … I think the numbers from the anonymous surveys will be very different than the number Northwestern reports for the Clery Act.”

In 2012, the University reported two accounts of forcible sex offenses on campus to the government. However, from June 2012 to May 2013, 54 students sought the services of CARE.

NU rolled out its own updated sexual misconduct policy Winter Quarter, more than a week before the White House task force was formed. The policy includes a more detailed definition of consent and expands sexual misconduct to include stalking and dating violence.

Addressing sexual assault on college campuses has received increasing national attention recently. In the past year, Title IX complaints have been filed with the U.S. Department of Education against numerous universities across the country, including Columbia University, the University of California at Berkeley, Amherst College and Vanderbilt University.

The Department of Education held rulemaking sessions over the past few months to implement the 2013 reauthorization of the Violence Against Women Act, which includes stricter safety requirements for college campuses. Earlier this month, Sen. Claire McCaskill (D-Mo.) sent a survey to 350 colleges about their campus climates and sexual assault policies.